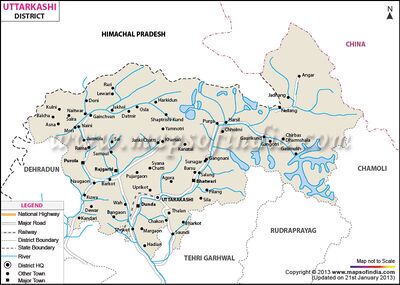 Harsil on Map of Uttarkashi

Harsil (हरसिल) is a village on the banks of Bhagirathi River, on the way to Gangotri in Uttarkashi district of Uttarakhand.

Situated at a height of 7,860 ft from sea level, Harsil lies 73 km. from Uttarkashi.

Over the years, a small number of Jadhs, an ethinic group of the Bhotiyas, have settled here, and speak a language closely resembling Tibetan.

Harsil was popular for the legend of ‘Pahari’ Wilson, or Raja Wilson. Frederick E. Wilson, an adventurer, deserted the British Army just after the Sepoy Mutiny of 1857. He escaped into Garhwal and met the Raja of Tehri seeking refuge. But the Raja was faithful to the British and refused to accommodate Wilson. Wilson moved into the mountains to escape detection. Fate landed him in Harsil, a remote beautiful village on the banks of the Bhagirathi river, with dense deodar slopes on either side. Wilson married a very beautiful pahari girl by the name of Gulabi. Then Wilson entered into a contract with a London-based company and built a fortune out of the export of skins, fur and musk. This was the time the British were building the Railways in India and there was great demand for quality wooden sleepers for the rails. Wilson cashed in on this and sent huge cut deodar trees floating down the river to the plains.

Initially, Wilson had not taken permission from the Raja of Tehri-Garhwal for his logging business. But later, he acquired a lease from the Raja, giving him a share in the profits. It is said that the revenue of the Raja of Tehri went up tenfold. Little wonder that Wilson was a welcome guest. It is said that in course of time, Raja Wilson, as he was known by then, minted his own currency and as late as the 1930s, his coins were found with the local people. According to some historians, the timber trade had made Wilson so wealthy and powerful that the local Raja of Tehri-Garhwal was unable to protect his subjects, whom Wilson brutalised and used as slaves.

Raja Wilson seemed to have been a sort of architect and built, what is known today as Wilson’s Cottage, a huge mansion, now in ruins. He also built the Charlieville Hotel in the hill station of Mussoorie, which now houses the Government of India training institute for the Indian Administrative Service recruits.

According to journalists Hugh & Colleen Gantzer, Wilson built a double-storeyed mansion in the village of Harsil on a deodar trunk frame filled with roughly dressed stones. But the ghost part of Wilson, comes with his building a swing bridge across the Bhagirathi. Wilson’s bridge has long since collapsed, but traces of it still remain. It was never rebuilt and today pilgrims walk down and cross a small footbridge on their way to Gangotri. But according to the locals, on moonlit nights one can still see the courageous Raja Wilson galloping down the area, where the bridge had been, in order to make the unwilling pilgrims have faith in his (alas) long vanished creation. Today a 410-feet iron bridge spans the river Jadganga.