Location of Khalari on Map of Mahasamund district

Khallari (खलारी) is a historical village in tahsil and district Mahasamund of Chhattisgarh.

THIS inscription was first brought to notice by Sir A. Cunningham’s Assistants, Mr. J. D. Beglar, in the Archæological Survey of India Reports, Vol. VII, p. 157 and was subsequently edited, without any translation or facsimile, by Dr. Kielhorn in the Epigraphia Indica, Vol. II, pp. 228 ff. It is edited here from the original stone and its ink impressions taken under my direction.

The slab of polished red sand-stone, which bears this inscription, was originally fitted into the wall of the maṇḍapa of a temple at Khalārī¹, about 45 miles east of Raipur in the Raipur District of Madhya Pradesh. It is now preserved in the Raipur Museum.

The inscription contains sixteen lines of writing, which cover a space of about 1' 11½” broad by 11½” high. The writing is in a good state of preservation, only two or three letters being slightly damaged. The size of the letters is about .5”. The characters are Nāgarī. The letters dh and bh present throughout their modern Nāgarī forms and the pṛishṭhamātrās have nowhere been used. The sign of the avagraha has been used in some places to mark the elision of the initial a or ā. The language is Sanskrit. Except for the customary salutation to Gaṇapati in the beginning and the particulars of the date etc. at the end, the whole record is in verse. The orthography does not present anything calling for remark, except that b is everywhere denoted by the sign for v.

The inscription refers itself to the reign of the king Haribrahmadēva of the Kalachuri² dynasty. The object of it is to record the construction of a temple of Nārāyaṇa by the shoe-maker (mōchī) Dēvapāla, son of Śivadāsa and grandson of Jasau, at the town of Khalvāṭikā

After the customary obeisance to Gaṇapati and three invocatory verses in honour of that god and of Bhāratī (the goddess of speech ) and Nārāyaṇa, the inscription goes on to state that in the Kalachuri branch of the Ahihaya³ ( i. e., Haihaya) dynasty there was born the king Siṁhaṇa a devotee of Śiva, who conquered eighteen forts of his enemies. His son was Rāmadēva, who killed in battle Bhōṇiṅgadēva of the Phaṇivaṁśa (i.e., Nāga lineage). His son was Haribrahmadēva, who also was a devotee of Chandrachūḍa (Śiva ). Verses 7-8 describe his capital Khalvāṭikā. The inscription was written by Rāmadāsa of the Vāstavya family and was engraved by the artisan Ratnapāla.

As the present inscription was incised only about thirteen years after the preceding one which also comes from the Raipur District, the kings Siṁhaṇa, Rāmadēva and Haribrahmadēva mentioned in it are plainly identical with Siṅgha, Rāmachandra and Brahamadēva named in the latter. Kielhorn identified the first two of them with the homonymous kings mentioned in the Rāmṭēk stone inscription. But the latter are there said to have belonged to the Yādava dynasty and must, therefore, be identical with the well-known kings Siṁhaṇa and Rāmachandra of that dynasty, who flourished in the

2. The text has actually Kalachuri in 1. 5, but it is evidently a mistake for Kalachuri.

3. Haihaya has been written here as Ahihaya evidently to suit metre.

4. According to the southern luni-solar system , the cyclic year for Vikrama 1471 expired was Jaya.

5. According to Kielhorn's calculations, the tithi ended 16 h. 18 m. after mean sunrise and the moon was in the nakshatra Rōhiṇī from 13 h. 8 m. or, by the Garga-siddhānta, from 1 h. 19 m. after mean sunrise, or by the Brahma-siddhānta, from about sunrise. The Jovian year Plava, by the Sūrya siddhānta rule without bīja, lasted from the 24th April 1414 A.C. to the 20th April 1415 A.C.

13th century A.C. Besides, there is no evidence that rule of the petty Kalachuri princes mentioned here extended as far as Nagpur in the west in the 14th century A.C. The identification proposed by Kielhorn cannot, therefore, be upheld.¹

There is only one place-name mentioned here, viɀ., Khalvātikā, which is clearly identical with Khalāri where the present inscription was discovered. 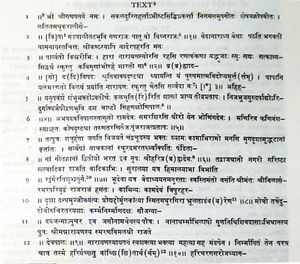 1 For further discussion of this subject, see my article on the Rāmṭēk stone inscription, Ep. Ind., Vol. XXV, pp. 7 ff.

2 From the original stone and inked estampages.

3 These daṇḍas which occur in the beginning of every line of this inscription are superfluous.

6 Metre: Sragdharā. In the second quarter of this verse some word like यस्या: has been omitted

8 Metre of this and the following verse: Mālinī.

11 Metre of this and the following verse: Sragdharā.