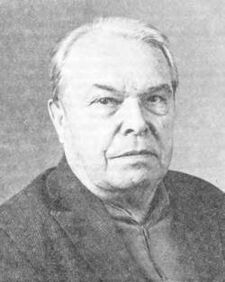 Dr. Mikhail Konstantinovich Kudryavtsev (Russian: Михаил Константинович Кудрявцев) was a Soviet ethnologist from Leningrad (now, Saint Petersburg, Russia), who had specialized the subject of the ethnology of northern India.[2]

He is regarded as one of the "fathers" of Indian Ethnography in Russia along with D. A. Suleykin and V. E. Krasnodembskiy.[3]

He did his doctorate in the History stream (Qualification known in Russia as: Doctor of Historical Sciences).[1]

He was a senior researcher at the Institute of Ethnography of Academy of Sciences in the USSR,[2] and wrote a number of works on the subject of ethnic history.[4] 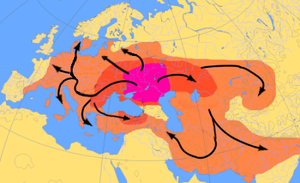 Migrations of Proto-Indo-Europeans from around Ukraine and neighbouring regions in the Caucasus and Southern Russia to the rest of Europe and later down into India.

Dip Chand Verma in his book "Haryana – India, the land and the people" mentions about the views of Kudryavtsev on the origin of the Jats, as follows:

"Basing his views on James Tod and Alexander Cunningham, he points out that the Jats may have come to India in the wake of Scythian invasions from Central Asia. He, however, pointed out that some legends speak of the Jats as having lived in Sind long before the Scythians invaded India, and even of a direct association of Jat chiefs with the heroes of the Mahabharata."[7]

H. A. Barari in his book "A Governor's Tryst with Haryana" mentions about the views of Kudryavtsev on the origin of the Jats, as follows:

"A Russian scholar, M. K. Kudryavtsev of the former U.S.S.R., who has made a deep study of this matter, has expressed the view that the origin of the Jats is shrouded in mystery."[8]

Kudryavtsev also discussed the role played by the Jats in the medieval history of India.[9]

On the Role of Jats in Northern India's Ethnic History

Distribution of Jat population, matching with the Aryavarta

Kudryavtsev, in "On the Role of Jats in Northern India's Ethnic History," wrote,

"The 1931 census, the most comprehensive census on record, gave the number of Indian Jats as over 8 million. More than 6 million of these lived in the Punjab that was not partitioned at the time, approximately one million lived in Rajasthan, and about 800,000 in the United Provinces (now the state of Uttar Pradesh). According to the census, large groups of Jats also resided in Kashmir, the North-West Frontier Province, Baluchistan and Sind. Unfortunately, the recent population censuses conducted in the Republic of India and in Pakistan have not supplied adequate statistics on the Jats.

The population census reports, other official documents, ethnographic surveys (Ibbetson, Crook, Rose, present–day authors) traditionally treat the Jats as a separate caste or a group of castes. Other researchers, especially economists, are inclined to regard the Jats as a separate social group of cultivators. However, on closer examination it becomes obvious that both definitions, far from giving a comprehensive idea of what the Jats really are, obscure our understanding of important historical events which involved the Jats.

Although most Jats both in India and Pakistan are farmers, it should be remembered that many Jat groups in the West Punjab which is Pakistan's territory depend on stock raising as their principal occupation, while a number of Jats who dwell in towns and cities have been for many generations artisans and merchants. In the past, Jat families gave rise to many feudal dynasties. In the colonial period, several generations of Jat groups served in the British Indian army and in the police. Some researchers did use the term "tribe" to define the Jats, and separate Jat tribes were not infrequently identified as such in the West Punjab. However, no one has assumed the task of analysing the ethnic meaning of the term "Jats" and tracing their history in a systematic manner. This explains our special emphasis on features of ethnic affinity between various groups of Jats, vague as these features may seem. We would also like to call attention to historical references to the Jats as a separate group of tribes in connection with major events in Northern India’s history and to their special role in the formation and national consolidation of the people of the northern parts of the Republic of India and Pakistan.

The origin of the Jats is still obscure.

As far back as the 1820s and 1830s, James Tod suggested that the Jats, together with some other tribes, were brought to India in the wake of the Scythian invasions from Central Asia at the beginning of the Christian era. He asserted that the Jats may have originated from Scythia's Getae mentioned by Herodotus. Alexander Cunningham attempted to find references to the Jats in the works of Greek and Roman authors. He identified the ancestors of the Jats with the Zantii or Xantii mentioned by Strabo and the Latii referred to by Pliny and Ptolemy, i.e., gave as their place of origin the same Central Asian territory between the Oxus and the Yaxarthes.

Thus, the two researches quoted above agree that the Jats came to India from outside, and also agree on their probable place of origin and the time of their probable migration to India.

It will, however, be recalled that some legends speak of the Jats as having lived in Sind long before the Scythians invaded the country and even of direct association of Jat chiefs with the heroes of the Mahabharata. All these hypotheses and legends still await thorough scientific investigation."[10]

It is worth mentioning here that Bhim Singh Dahiya noticed that Arnold Joseph Toynbee was inclined to believe that the Mahabharata might have been the product of the Scythians.[11]

In an article titled "Jat Bharat Se Baahar" (English: Jats outside of India) in "Jat Samaj," Maharaja Surajmal Visheshank, January 1976, Nos. 3–4, Agra, p. 38, Naipal Singh wrote that Pt. Jawahar Lal Nehru, the [then] Prime Minister of India, did not allow the entry of Dr. Kudryavtsev's works on the Jats into India.[12]