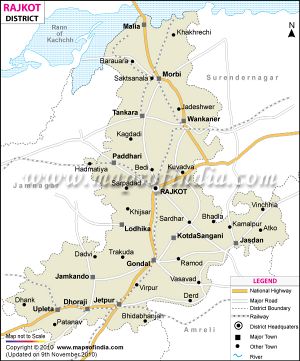 Morvi (मोरवी) is a city and district of Saurashtra region in Gujarat.

Ram Swarup Joon[1] writes that some Gondal people call themselves descendants of the Chauhans, but others associate themselves with Lord Krishna. According to historical evidence Jarija and Yadu Bhan were two brothers in the dynasty of Krishna. Jarija established his rule in Kathiawar, Gujarat. The present chieftains of Jamnagar, Dharol, Rajkot, Gonal and Morvi belonged to this very dynasty but all of, them now claim to be Rajputs. The Gondal of Rawalpindi, Cambalpur, Shapur, Mainwali are called Jats. Bosal, Tole, Jaspal, Sanatana and Gogh are branches of the Gondals.