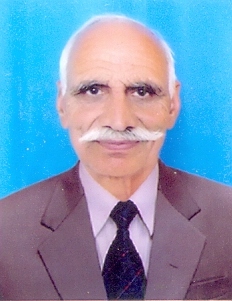 Pitha Ram Guleria (पीथाराम गुलेरिया) is a social worker from Sujangarh city in Churu district of Rajasthan. He is president of Guleria Sewa Sansthan, Sujangarh.

He was born on 20 August 1948 in the family of Ch. Purkha Ram Guleria and Smt Padma Devi. He married to Smt Gyani Devi daughter of Jassu Ram Bishu of Malsisar, Sujangarh.

He did M.Com. (Accountancy]] and is Hindi Visharad. He served as Accounts Officer under Rajasthan Government in various Departments for 42 years and 5 months.

Under the banner of Guleria Sewa Sansthan, Sujangarh, he did a door-door survey of Jat families living in Sujangarh. Based on these data he published on 20 August 2015 a Directory of individual Jat members, clan wise with localities and Phone numbers, under the title 'Sujangarh Jat Samaj Nirdeshika'. There are Total 1363 Jat families residing in Sujangarh town. Gotra wise details are given in Sujangarh.