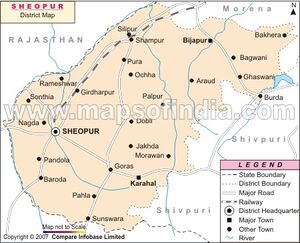 Sheopur (श्योपुर) is a city and district in Madhya Pradesh.

The Sheopur tehsil of Sheopur district adjoining Rajasthan is rich in Jat population. There are many villages inhabited by Jats. About 40-45 villages around Sheopur are having Jats in majority. According to the records of Jagas and Bhats they had come to this area long back from Rajasthan, Delhi and Haryana. It is believed that when Khilji was the ruler on Delhi, the Barauda area of Sheopur was ruled by Gond Rajas and the Jats of this area defeated Khilji. The oldest village of Jats here is Radep. This is inhabited by Kuradia and Mogar gotra Jats.[1]

There were minor Jagirs of Jats in the area. Akodia gotra Jats were in the army of Maharaja Suraj Mal. After the death of Maharaja Jawahar Singh sardar Charandas Akodia came to Sheopur and settled here. He originally belonged to Ballabhgarh. He constructed a grand Laxman temple in Hansalpur, which is a unique example of architecture. He established his Jagir here. There are 8-9 villages of Akodia Jats at present out of these Talawda village is main.[2]

Akodia Jats are influential in the area. There are 8-9 villages of Akodia clan in Sheopur tahsil. Talabada is major village of Akodia Jats. [3]

There was Jat Sikh Jagir in village Kelor, its last Jagirdar was Sardar Hajari Singh, who was married in the family of Raja Mahendra Pratap of Mursan state. [4]

James Tod on Gaurs of Sheopur

James Tod is a pioneer historian on Jats who thoroughly scrutinized the bardic records of Rajasthan and Gujarat and also brought to light over a dozen inscriptions on the Jats.

James Tod[6] The Gaur tribe was once respected in Rajasthan, though it never there attained to any considerable eminence. The ancient kings of Bengal were of this race, and gave their name to the capital, Lakhnauti.

We have every reason to believe that they were possessors of the land afterwards occupied by the Chauhans, as they are styled in all the old chronicles the ' Gaur of Ajmer.' Repeated mention is made of them in the wars of Prithwiraja, as leaders of considerable renown, one of whom formed a small State in the centre of India, which survived through seven centuries of Mogul domination, till it at length fell a prey indirectly to the successes of the British over the Mahrattas, when Sindhia in 1809 annihilated the power of the Gaur and took possession of his capital, Sheopur. In 1807 the author passed through this territory, in a solitary ramble to explore these parts, then little known ; and though but a young Sub., was courteously received and entertained both at Baroda and Sheopur. In 1809 he again entered the country under very different circumstances, in the suite of the British envoy with Sindhia's court, and had the grief to witness the operations against Sheopur, and its fall, unable to aid his friends. The Gaur prince had laid aside the martial virtues. He became a zealot in the worship of Vishnu, left off animal food, was continually dancing before the image of the god, and was far more conversant in the mystical poetry of Krishna and his beloved Radha than in the martial song of the bard. His name was Radhikadas, ' the slave of Radha ' ; and, as far as he is personally concerned, we might cease to lament that he was the last of his race.

[p.139]: A petty district, yielding about £5000 annually, is all this rapacious head of a predatory government has left to the Gaur, out of about twelve lacs of annual revenue. The Gaur has five sakha : Untahar, Silhala, Tur, Dusena, and Budana.

Only two sub-clans are named in Rajputana Census Report, 1911, i. 255. Gaur Rajputs are numerous in the United Provinces, and the Gaur Brahmans of Jaipur represent a foreign tribe merged into Hindu society (IA, xi. 22). They can have no connexion with the Pala or Sena dynasty of Bengal (Smith, EHI, 397 ff.).

Back to Madhya Pradesh/Jat Villages