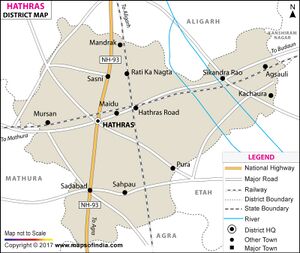 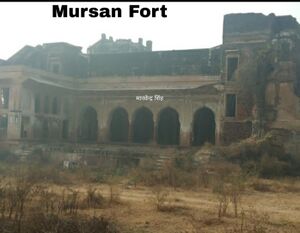 Mursan (मुरसान) is a town in Hathras tahsil and district in Uttar Pradesh. It was a princely state of Thenua Jats.

Ram Sarup Joon[1] writes that ... Chaudhary Nand Ram, holder of 87 villages, was among the followers of Churaman. During the time of Aurangzeb he was given high appointment in the police, Wazir Sadat Khan gave the title of Raja to Bhup Singh and reinstated him in his state. Finally this state was divided into various parts. 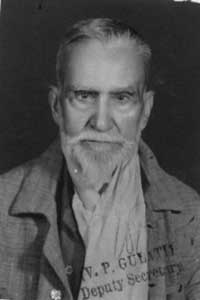 At the end of 16th century Thenuas came from Rajasthan to Brij under the leadership of Makhan Singh. They settled near Javra and occupied nearby areas. This was during the reign of Mughal ruler Jahangir. Their state was officially known as Tappa Javra.[2]

Makhan Singh - Makhan Singh married with daughter of Khokhan gotra Jats, who were in occupation of areas around Raya. After marriage Makhan Singh organized Jats of that area and gathered power. He constructed forts at Gausna (गौसना), Sindura (सिन्दूरा) etc. which were visited by historian Thakur Deshraj.[3] [4]

After the end of reign of Shahjahan, Sadulla Khan made a cantonment to control the growing power of Jats at a place known as Sadabad. In 1652 AD Sadulla Khan occupied [Tappa]] - Javra of Jats, part of Jalesar, some villages of Khandoli, 80 villages of Mahavan and merged them with Sadabad pargana. This way Jats came under Mugals but they did not pay any Tax. [5]

Nand Ram (r. 1645 -1695) - After Shahjahan, Makhan Singh's grandson Nand Ram again organized the Jat power and became strong by merging Porcha Raja of Dariyapur with him. When Aurangjeb became the ruler of Delhi he could not ignore Nand Ram and awarded him the title of Faujdar and handed over Tochhigarh tahsil to him. Nand Ram ruled tactfully and bravely for 40 years and died in 1695. [6]

Puhap Singh - After Khasal Singh his son Puhap Singh became the ruler. Puhap Singh lost war with Bharatpur. He had to leave Mursan and went to Sasni and occupied it. He constructed a strong fort here. Sasni is known as a a fort of Jat pride. In 1761 he accepted rule of Maharaja Jawahar Singh of Bharatpur and given back Mursan in friendship. Puhap Singh did great help to Jawahar Singh in Delhi war. As a result it annoyed the Delhi rulers. Delhi ruler Najib Khan sent his army to attack Mursan. Jats fought bravely but had to leave Mursan. Puhap Singh struggled for 10 years to get back Mursan. He succeeded in 1785 to get back Mursan. He continued to expand till his death in 1798. [8]

As said earlier out of 14 sons of Nandram, two were more famous: Jalkaran Singh and Jai Singh. Jalkaran's grandson was Bhagwant Singh, who was ruler of Sasni and Sursan. Jai Singh's grandson was Daya Ram, who became ruler of Hathras. Bhagwant Singh later helped Lord Lake and got Sonkh and Madan in Jagir. According to Mathura Memoirs, the rulers of Mursan and Hathras considered them selves Independent. In 1817 Mursan and hathras forts fell to British under General Marshal. Raja Daya Ram thought it appropriate to have a treaty with British rule. [9]

Raja Daya Ram ( 1775-1841) - After the death of Thakur Bhuri Singh 1n 1775,his son Daya Ram ascended the throne of Hathras. He was a astute ruler and was well versed in the literary circles. He was the first to assume the title of Raja of Hathras. Historians credit him to have brought the all round progress and prosperity of Hathras as a state. He expanded territories Hathras which in his time included Simardhari, Tocchigarh, Gubrari, Barhad, Karas, Karil, Mant, Mahaban, Hasangarh, Sahapau and Khandoli towards Agra. He was considered along with Raja of Mursan Raja Bhagwant Singh were considered the most powerful chiefs in this part of the country by the Britishers. Hathras was said to be the strongest fort in the country.

Thakur Gobind Singh (1841-1861) - On his father's death, he held only a portion of one village, Shahgarh, and merely a Motgagee, succeeded Raja Dayaram. Britishers had reduced the Hathras estate to minimum limits during the reign of Raja Daya Ram. Thakur Gobind Singh with his no conflict views and his loyal services to the British during the 1857 mutiny ,was able to get much of Hathras estate back which also included the Mathura villages and the Koil estate of Aligarh.

Raja Harnarain Singh (1861-1896) - When the upheaval of 1857 was over, Raja Govind Singh died in 1861. He was survived by his wife Rani Sahib Kunwar of Bharatpur and an infant son, but the son died due to illness months after his father. The Raja had authorised to adopt a son. She selected Har Narain singh,the son of Thakur Rup singh Of Jatoi, a descendent. He resided with Rani sahib in Vrindavan at Keshighat presently PMV. He married Rani Swarup Kaur from Bharatpur and the second one was from Dholpur, Rani Hanumannt Kaur. He could not have any successor born out of his two ranis, hence he adopted Kunwar Kharag Singh from Mursan, who later came to be known as Raja Mahendra Pratap Singh.

Raja Prem Pratap Singh (1913-1947): He was just one year old when his father left the family for the quest of freedom of India.He became the estate owner in 1924, as according to the act when he was just 11 years old. His mother passed away in 1925 when he was just 12. Hence he had his elder sister Bhakti Devi only whom he loved dearly.In 1931 when he turned 18 he became the legal owner of the estate.This was the time when he gave much of the estate on lease. The estate was also able to win some important cases under him. He married an English lady named Georgiana who unfortunately left back to England in 1946. Her going back had justification. They had two children Amar Pratap and Sarla Devi. After his wife left Prem Pratap Singh became a lonely man. He mysteriously passed away on 13th June 1947 in Vrindavan. He was just 34 years old.

Raja Amar Pratap Singh -Born in Dehradun on 4th Jan,1940. - He was just 6 years old when his mother left and went back to England. His father passed away in 1947 when he was only 7 years old. He had a similar situation as his father. After 1947 as according to the act he became the owner of the estate. He was offered to join politics by various parties, late Indira Gandhiji personally wrote to him to join the party but he stayed away from politics. He married to Balbir Kaur in 1968 in Dehradun and now he has three children Meeta, Charat and Sharad. He knew the importance of family,hence he devoted his attention to them and stayed away from the estate affairs as much as could. He inherited qualities from his grandfather as he too never had any interests and hunger for power.He now lives comfortably with his family in Dehradun Villa.

The most well known ruler of this state was Raja Mahendra Pratap (1886-1979). He was popularly known as Aryan Peshwa. He was the third son of Raja Ghansyam Singh of Mursan and was adopted by Raja Harnarayan Singh of Hathras.

Mahendra Pratap married the daughter of Jat Sikh ruler of the native state of Jind, Haryana.