Note - Please click → Sirsala for details of similarly named villages at other places. 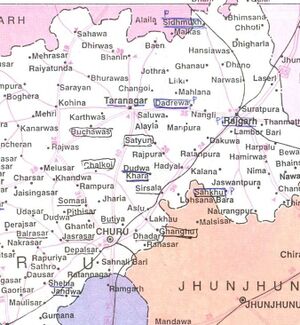 Location of Villages around Churu

Sirsala (सिरसला) is a village in tehsil Churu of Churu district in Rajasthan.

It is situated at a distance of 25 km from Churu in the north direction on Rajgarh road. It is located on Delhi-Bikaner rail line. This is an old historical village founded thousand years back. This is a well-connected village. The water in village is hard. There is a sati in the village worshipped since last 500 years, an annual fair is also organized here. As of 2001 census the population of the village is 5991 out of them 1750 are SC and 188 are ST.

Rajatarangini[3] tells us that ....Udaya who worked hard, until he fainted, in collecting an army, heard that in the town of Shankaravarmma, Lothana had joined Alankarachakra, and he also heard that Vigraharaja, son of king Sussala, and Bhoja, son of Salhana,had come with Lothana. Then when their insurrection had gained strength, Udaya hurriedly marched in one day over the road which is traversed in many days. The Damara (Alankarachakra), unable to take possession of Kantha with his own party, was at a loss, and on being checked in his movements by Udaya's attack, he fled and took shelter in the fort of Shirahshila, situated on the banks of the Sindhu, where the Madhumati also flowed with its pearl like beauty. (p.223)