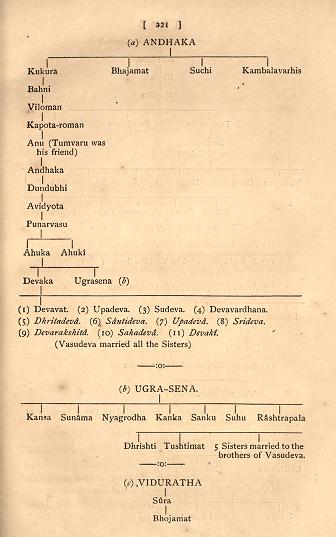 Ugrasena Ancestry as per Bhagavata Purana

Ugrasena (उग्रसेन) was the King of Mathura, a kingdom that was established after the various factions of Yadava, Vrishni and Bhoja clans decided that the dividing states would unite as one and that the Kingship would not be subject to heredity (but could be) and if decided not to be so, the succeeding leader would be chosen by a simple majority, therefore, a semi-democracy was established.

As per Bhagavata Purana ancestry of Ugrasena was as under:

When the groups gathered, the uniting factions decided to throne Ugrasena as the king due to his skills in warfare and his humble nature towards domestic and foreign policy issues. Ugrasena was married to Queen Padmavati and was the father of Kansa. Due to the tremendous power of Kansa, Ugrasena declared him as the crown prince of Mathura, therefore guaranteeing the succession of kingship after his retirement or death. Later on, Ugrasena also installed Kansa as the army commander.

However, due to hostile behavior of Kansa and his ruthless actions towards the military members and the citizens of Mathura, growing friction began to occur the two, which led to the serious thought of whether Kansa should be dethroned. However, before such action might take place and sensing change, Kansa overthrew his father with the support of his father-in-law, King Jarasandha of Magadha and his immense military. After the coup, Kansa imprisoned his father and kept him in the deepest pits of jail for a sustained time period.

After the death of Kansa by the hands of Krishna, Ugrasena was installed the King of Mathura and ruled over the kingdom for a while. The crown prince under his second reign was Krishna's father, Vasudeva.

Qanungo[1] writes that about the time of the Mahabharat, Yadus occupied the Surasena or modern Mathura country. Eighteen clans lived together,obeying the command of Ugrasena, the head of the leading clan of the Bhojas (who being descended from the Haihayas represented the eldest line of Yadu). Ugrasena was called King only by courtesy. He was the Grand Patriarch of the whole tribe by sufferance, without any pretension to despotic authority; real power was vested in a Council of Elders, consisting of the most influential persons of the different gotras. His position was, so to say, like that of the recognized head of a Jat barah or chaurasia, i.e., a group of twelve or eighty-four villages inhabited mainly by the same people. But an Aurangzeb was born to Ugrasena, the cruel and resolute Kansa, who imprisoned his father and usurped despotic authority over the Yadus with the help of some powerful mercenary fighters. The upstart, having married two daughters of the powerful Magadha Emperor Jarasandha, swelled up with pride and was half ashamed to call himself a Yadava. He reduced the junior clans of the Yadavas to the position of subjects and his tyranny drove many of them to cattle-rearing as a means of livelihood, which could no longer be earned by the sword and as members of the ruling aristocracy. Shri Krishna killed the wicked Kansa and restored Ugrasena to his authority. Eighteen times did the haughty prince of Magadha renew his attack upon the Yadavas to avenge the death of his son-in-law; as often was he forced to retire discomfited. At last worn out in an unequal conflict, the Yadava chiefs decided upon the evacuation of the Mathura region, where their powerful enemy gave them no peace.

Krishna departed to Dwaraka along with Andhakas, Vrishnis, Bhojas etc clans. Mahabharata mentions in chapter 25, shloka 26 that Lord Krishna founded a federation ‘Gana-sangha’ of Andhak and Vrishni clans. This federation was known as ‘Gyati-sangh’. Each member of this ‘Gyati-sangh’ was known as ‘Gyat’. Krishna was chief of this sangha. The chief of Andhaka republic was Ugrasena. Over a period of time ‘Gyati’ became ‘Gyat’ and it changed to Jat. The use of sutra - Jat jhat sanghate in sanskrit by Panini's grammar seems to have started from here. Thus Krishna is the real ancestor and founder of Jats. [2] [3]