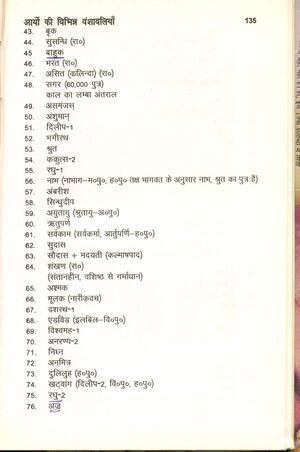 Aja (अज) was a Suryavanshi king, the son of king Raghu, and thus a scion of the Ikshavaku dynasty, who claimed descent from the sun-God Surya.

Aja (अज) is a term mentioned by Panini in Ashtadhyayi. [1]

Ajaka (आजक) is a term mentioned by Panini in Ashtadhyayi. [2]

His paternal grandfather was the pious king Dilipa. King Aja's consort was the heavenly nymph Indumati; they were the parents of King Dasaratha of Ayodhya, who was the father of Rama.

The classical Indian poet Kalidasa has elaborated upon the lives and careers of the kings Dileepa, Raghu and Aja in his work entitled Raghuvamsha (literally: "Dynasty of Raghu"). This is significant as these rulers were the immediate forbears of Rama.

Rajatarangini[3] tells us that when Sussala became King of Kashmir second time in 1112 .... Ajjaka, the minister of king Salha, perished in the fight. He was born in the village of Patamga. (VIII,p.40)

Rajatarangini[4] tells us that .... The lord of Kampana who had rebelled against the king Sussal, came out of Vijayeshvara where he lived and checked the powerful Damaras. He was afraid lest the Lavanya people (Damaras) would come to know his weakness and fall on his rear and harass him in his march ; wishing therefore to conceal his weakness, he fell on the soldiers of Ajaraja who arrived at Vijayeshvara, killed two hundred and fifty men of the enemy, left Vijayakshetra and entered the city. (VIII,p.64)