Map of Jammu and Kashmir 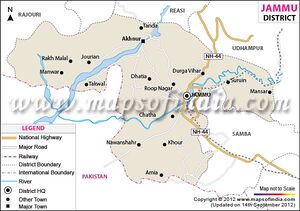 It is located at a distance of 28 km from Jammu, Akhnoor is located in the foothills of the Himalayas. The picturesque town is located on the banks of the Chenab River.

It came to be known as Akhnoor during the Mughal reign. The reason behind this is that the Mughal emperor's wife had vision problem in her eyes and she was prescribed to wash her eyes with the holy water of Chenab using some ayurvedic medicines by a local Hindu priest. The queen strictly followed the prescription and her vision was restored. Hence the city was named Akhnoor as in Urdu the word 'noor' means vision/glow/shine and the word 'aankh' means the eye.[1]

The place is believed to be the ancient city of Virat Nagar mentioned in the Mahabharata[2][3] however, Bairat, a town in northern Jaipur district of Rajasthan is more established as the ancient Virat Nagar.[4][5] The place is one of the most important historical sites in Jammu and Kashmir.

Excavations by the Archaeological Survey of India have established the fact that Akhnoor was one of the last bastion of the Harappan Civilization and Manda, Akhnoor is the northern most site of the Harrappan Civilisation. Terracotta figures and other anthropological objects belonging to the later Harrappan period have been found during the excavations.Beyond Akhnoor, towards the upper hilly area that joins Sivalik Hills, there has been no trace of any object that could show that Harappans moved any further beyond this town.

Excavations at Ambaran-Pamberwan sites have proved that the place was a prominent abode of Buddhism during the Kushan period and Gupta period. Apart from an ancient an eight-spoke Stupa (a mound-like structure containing Buddhist relics, made of high quality baked bricks and surrounded by stone pathways, meditation cells and rooms),[6] life sized Terracotta busts of Buddha and coins belonging to those periods were also excavated from the sites.[7] The 14th Dalai Lama visited the place in August, 2012. Buddhist relics from the Pre-Kushan reign and silver caskets, gold and silver leaves, pearls, corals and three copper coins from the Gupta period are reported to be found.[8] The location of the Stupas is such that it lies on the ancient routes from Pataliputra, now in present-day Patna, Bihar in India to Taxila now in Punjab Province, Pakistan.

Among other find of historical importance that indicates the place inhabited by people pre-dominantly belonging to Hinduism is the green coloured Trimurti idol made up of a single stone at Ambarran Village.

Raja Jagdev Panwar became the ruler of Malwa after his father King Udayaditya, but he gave the rule to his brother owing to family-dispute and settled his kingdom at Jarg. He slew a demon who used to eat a human-being daily in a fort near Depalpur (Okara) and Raja Kankhar bestowed him half kingdom and married his daughter with him. He struck off his own head on the demand of a witch-wife of the court-bard of Raja Jai Singh but was miraculously restored to life. He founded Akhnoor State, ruled by Panwar Dynasty of his descendants for 600 years.

Jagdev Panwar who founded Panwar dynasty in Akhnoor kingdom King Udayaditya (Vikramiditya clan) of Malwa, Dhar had two wives. The valerian Jagdev was son from Solankin queen. The other queen Baghelin did not want that Jagdev become crown prince and she arranged conspiracy. Jagdev and his wife had to leave the court. Jaisingh was the competent general of Udayditya.

Jagdev Panwar did deep mediation for Jagdamba (Mahakali). Goddess Kankali asked the head of Jagdev from his wife. The head of Jagdev was given to Kankali. Kankali took head to heaven and showed the sacrifice to devtas. Later, Kalinka joined head with Jagdev body made Jagdev live.

Later on due to dispute Jagdev Panwar migrated to Himalayan belt at Akhnoor, Jammu and Kashmir. Jagdev Panwar established his kingdom at Virat Nagri (2-3 kilometers away from Akhnoor) in 1096 AD. Jagdev Panwar was devotee of Amba goddess and after the death of Jagdev, the name of Virat Nagri was changed as Ambaraian.