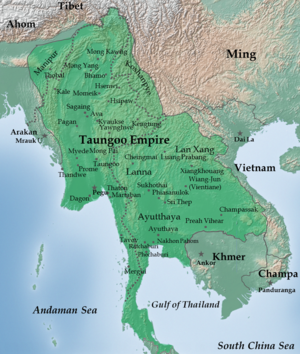 Location of Arakan on Map of Taungoo Empire (1580)

According to the most widely accepted version of its origin, the Thai state based at Ayutthaya in the valley of the Chao Phraya River rose from the earlier, nearby Lavo Kingdom (at that time, still under the control of the Khmer Empire) and Suvarnabhumi. One source says that in the mid-14th century, due to the threat of an epidemic, King Uthong moved his court south into the rich floodplain of the Chao Phraya River onto an island surrounded by rivers.[1] The name of the city indicates the influence of Hinduism in the region. It is believed that this city is associated with the Thai national epic, the Ramakien, which is the Thai version of the Ramayana.

Ayutthaya began its hegemony by conquering northern kingdoms and city-states like Sukhothai,[2] Kamphaeng Phet and Phitsanulok. Before the end of the 15th century, Ayutthaya launched attacks on Angkor, the classical great power of the region. Angkor's influence eventually faded from the Chao Phraya River Plain while Ayutthaya became a new great power.

However, the Kingdom of Ayutthaya was not a unified state but rather a patchwork of self-governing principalities and tributary provinces owing allegiance to the king of Ayutthaya under The Circle of Power, or the mandala system, as some scholars suggested.[3] These principalities might be ruled by members of the royal family of Ayutthaya, or by local rulers who had their own independent armies, having a duty to assist the capital when war or invasion occurred. However, it was evident that from time to time local revolts, led by local princes or kings, took place. Ayutthaya had to suppress them.

Due to the lack of succession law and a strong concept of meritocracy, whenever the succession was in dispute, princely governors or powerful dignitaries claiming their merit gathered their forces and moved on the capital to press their claims, culminating in several bloody coups.[4]

At the start of the 15th century, Ayutthaya showed an interest in the Malay Peninsula, but the great trading ports of the Malacca Sultanate contested its claims to sovereignty. Ayutthaya launched several abortive conquests against Malacca which was diplomatically and economically fortified by the military support of Ming China. In the early-15th century the Ming admiral Zheng He had established a base of operation in the port city, making it a strategic position the Chinese could not afford to lose to the Siamese. Under this protection, Malacca flourished, becoming one of Ayutthaya's great foes until the capture of Malacca by the Portuguese.[5]

Ayutthaya was friendly towards foreign traders, including the Chinese, Vietnamese, Portuguese, Indians, Japanese, Koreans, Persians, and later Spaniards, Dutch, English, and French, permitting them to set up villages outside the walls of the capital, also called Ayutthaya.

In the 16th century, it was described by foreign traders as one of the biggest and wealthiest cities in the East. The court of King Narai (1656–1688) had strong links with that of King Louis XIV of France, whose ambassadors compared the city in size and wealth to Paris.

By 1550, the kingdom's vassals included some city-states in the Malay Peninsula, Sukhothai, Lan Na and parts of Burma and Cambodia.[6] This part of the kingdom's history is sometimes referred to as the "Ayutthayan Empire".

In foreign accounts, Ayutthaya was called Siam, but many sources say the people of Ayutthaya called themselves Tai, and their kingdom Krung Tai (Thai: กรุงไท) meaning 'Tai country' (กรุงไท). It was also referred to as Iudea in a painting that was requested by the Dutch East India Company.

Hukum Singh Panwar (Pauria)[7] writes .... When the Saka people moved still further in the far eastern countries, they founded a city named Vaisali[8] in Burma, which became the capital of Arakan, ruled over by the Hindu dynasty of

The Jats:Their Origin, Antiquity and Migrations: End of p.196

Dhanyawati from 8th century AD. to 11th century A.D., and which is now identified with Vaithali village, surrounded by monuments ancient Vaisali. It is further interesting to note that the ancient Kambuja[9] (modern Cambodia and Cochin-China, or Kampuchia Kambojia, Thailand-Dahiland?) and Ayuthya = Ayodhya, which was made capital by a chief of Utong, who assumed the title of Ramadhipat in 1350 A.D. in Siam (Thailand or Dahiland) are unmistakably reminicent of the migrations and settlements of the Sakas, Kambojas and probably Manvas (Manns) [10] also in those countries in olden times[11] (For ancient Indian Literature in Java and Bali islands, see Weber, 1914; 189 195, 208,229, 271, 280). Jitra or Jatra, a place name in the plains of Malaya, may well be attributed to the old Saka Jats (Mall or Malli from ancient Malloi) in that peninsula, probably known as Malaya after them.