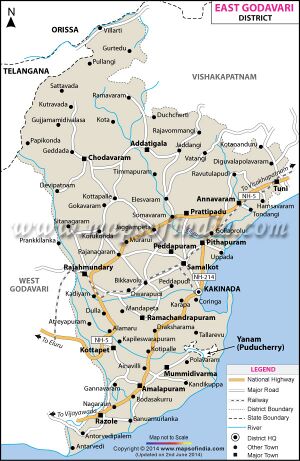 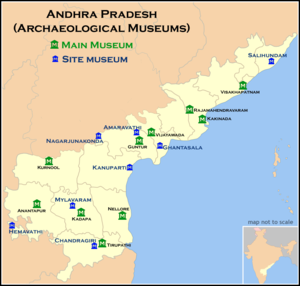 It is located on the banks of the Godavari River, in East Godavari district of the state. It is also one of the two municipal corporations in the district, alongside Kakinada. Rajahmundry is located at 16.98°N 81.78°E.

In its earlier days, it was called Rajamahendravaram. It is a historical city.

The city can be traced back to the rule of the Chalukya king Raja Raja Narendra who reigned around 1022 AD, after whom it is named - Rajamahendri or Rajamahendravaram. Remains of 11th century palaces and forts still exist. However, new archaeological evidence suggests that the town may have existed much before the Chalukyas.

[p.516]: west of Ganjam.[2] Both bearing and distance point either to Rajamahendri on the Godavari river, or to Koringa on the sea coast, the first being 251 miles to the south-west of Ganjam, and the other 246 miles in the same direction. But as the former is known to have been the capital of the country for a long period, I presume that it must be the place that was visited by the Chinese pilgrim. The original capital of Kalinga is said to have been Srikakola, or Chikakol, 20 miles to the south-west of Kalinga-patam. The kingdom was 5000 li, or 833 miles, in circuit. Its boundaries are not stated ; but as it was united to the west by Andhra, and to the south by Dhanakakata, its frontier line cannot have extended beyond the Godavari river, on the south-west, and the Gaoliya branch of the Indravati river on the north-west. Within these limits, the circuit of Kalinga would be about 800 miles. The principal feature in this large tract of country is the Mahendra range of mountains, which has preserved its name unchanged from the time of the composition of the Mahabharata to the present day. This range is mentioned also in the Vishnu Purana, as the source of the Rishikulya river, and as this is the well-known name of the river of Ganjam, the Mahendra mountains can at once be identified with the Mahendra Male range, which divides Ganjam from the valley of the Mahanadi.

Rajamahendri was the capital of the junior, or eastern branch of the Chalukya princes of Vengi, whose authority extended to the frontiers of Orissa. The kingdom of Vengi was established about A.D. 540, by the capture of the old capital of Vengipura, the remains of

[p.517]: which still exist at Vegi, 5 miles to the north of Ellur, and 50 miles to the west-south-west of Rajamahendri. About A.D.750, Kalinga was conquered by the Raja of Vengi, who shortly afterwards moved the seat of government to Rajamahendri.

The Calingae are mentioned by Pliny,[3] as occupying the eastern coast of India below the Mandei and Malli, and the famous Mount Maleus. This mountain may perhaps be identified with the high range at the head of the Rishikulya river, in Ganjam, which is still called Mahendra Male, or the " Mahendra mountain." To the south, the territory of the Calingae extended as far as the promontory of Calingon and the town of Dandaguda, or Dandagula,[4] which is said to be 625 Roman miles, or 574 British miles, from the mouth of the Ganges. Both the distance and the name point to the great port-town of Coringa, as the promontory of Coringon, which is situated on a projecting point of land, at the mouth of the Godavari river. The town of Dandaguda, or Dandagula, I take to be the Dantapura of the Buddhist chronicles, which, as the capital of Kalinga, may with much probability be identified with Raja Mahendri, which is only 30 miles to the north-east of Coringa. From the great similarity of the Greek Γ and Π, I think it not improbable that the Greek name may have been Dandapula, which is almost the same as Dantapura. But in this case, the Danta, or "tooth relic," of Buddha must have been enshrined in Kalinga as early as the time of Pliny,

[p.518]: which is confirmed by the statement of the Buddist chronicles, that the "left canine tooth" of Buddha was brought to Kalinga immediately after his death, where it was enshrined by the reigning sovereign, Brahmadatta.[5] Dantapura, also, is said to have been situated on the northern bank of a great river, which can only be the Godavari, as the Kistna was not in Kalinga. This fact alone would be sufficient to fix the position of Dantapura at the old capital of Rajamahendri, which is situated on the north-eastern bank of the Godavari. The name of Mahendri is perhaps preserved in the Pitundra Metropolis of Ptolemy, which he places close to the Maisolos, or Godavari, that is, to the river of Masuli-patam.

A still earlier name for the capital of Kalinga was Sinhapura,[6] which was so called after its founder, Sinha-bahu,[7] the father of Vijaya, the first recorded sovereign of Ceylon. Its position is not indicated, but there still exists a large town of this name on the Lalgla river, 115 miles to the west of Ganjam, which is very probably the same place.

In the inscriptions of the Kalachuri, or Haihaya dynasty of Chedi, the Rajas assume the titles of "Lords of Kalanjjarapura and of Tri-Kalinga. Kalanjar is the well-known hill-fort in Bundelkhand; and Tri-Kalinga, or the " Three Kalingas," must be the three kingdoms of Dhanaka, or Amaravati, on the Kistna, Andhra or Warangol, and Kalinga, or Raja Mahendri.