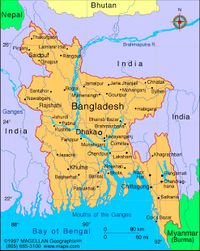 Samatata (समतट) was one of Buddhist Kingdoms visited by Xuanzang in 639 AD. Samatata has been identified with the South-eastern part of the Bengal presidency corresponding to the Dacca, Faridpur, Backerganj, Jessore and Khulna districts in Bangladesh. [1]

It is one of the frontier kingdoms which offered their sub- mission to Samudragupta. Sen remarks that Samudragupta reduced the king of Samatata to the rank of a subordinate prince who had to part with most of his powers and was 'allowed to rule over a much reduced dominion as a vassal of the emperor'. Retaining only the control of its internal administration, he had to pay various kinds of taxes to Samudragupta, attend his durbars, render obeisance to him and gratify

Personal and geographical names in the Gupta inscriptions 261

his imperious commands. Samatata is the only territory in Bengal to be referred to in the Allahabad Prasasti. The first epigraphic reference to Samatata is to be found in this inscription. Literally the name means 'the shore country' or 'Level country'. 'Samatata in the Gupta period denoted a territory lying to the east of the Brahmaputra'. The Brhatsamhita mentions it as a country situated in the East. The Chinese traveller Hiuen Tsang proceeded from Kamarupa southwards and after a journey of 1,200 or 1,300 li (6 li- 1 mile) reached the country of Samatata. According to him, this country was on the seaside and was low and moist and was more than 3,000 li in circuit. From Samatata, the pilgrim journeyed towards the West for over 900 li and reached Tanmolihti, or Tamralipta, the modern Tamluk in the Midnapur district.

Samatata, therefore, must have been the South-eastern part of the Bengal presidency corresponding to the Dacca, Faridpur, Backerganj, Jessore and Khulna districts.

Epigraphical evidence, however, shows that Samatata comprised the districts of Comilla, Noakhali and Sylhat. Its capital Karmmanta has been identified with Bad-Kamata, 12 miles west of Comilla district. After the rule of the Guptas, Samatata was successively under the Khadga, Candra, Varman and Sena dynasties.

Alexander Cunningham[3] writes that The capital of the kingdom of Samatata, or San-mo-ta-cha, is placed at from 1200 to 1300 li, or from 200 to 217 miles, to the south of Kamrup, and 900 li, or 150 miles, to the east of Tamralipti, or Tamluk.[4] The first position corresponds almost exactly with Jasar, or Jessore, which is most probably the place intended. The bearing and distance from Tamluk would take us to the uninhabited part of the Sundari-vana, or Sundarbans,

[p.502]: between the Huranghata river and Bakarganj. But in a country so much intersected by watercourses as Lower Bengal, the road distance is about one-fourth greater than the direct distance, measured on the map. Thus, Jessore, which is 103 miles from Dhakka, and 77 miles from Calcutta by road, is only 82 and 62 miles distant from them by direct measurement. Accordingly, Hwen Thsang's distance of 150 miles by route will not be more than 120 miles by direct measurement on the map, which is only 20 miles in excess of the actual direct distance between Jessore and Tamluk. But as Tamluk is not approachable by land from the east, the pilgrim must have travelled at least one-half of the route by water, and his distance of 150 miles may be accepted as a fair estimate of the mixed route by land and water, which could not be actually measured. The name of Jasar, or " The Bridge," which has now supplanted the ancient name of Murali, shows the nature of the country, which is so completely intersected by deep watercourses, that before the construction of the present roads and bridges, the chief communication was by boats. Murali, or Jasar, is most probably the Gange regia of Ptolemy.

The country of Samatata is mentioned in the inscription of Samudra Gupta on the Allahabad pillar,[5] in which it is coupled with Kamrup and Nepal. It is mentioned also in the geographical list of Varaha Mihira, who lived in the beginning of the sixth century.[6] According to Professor Lassen, the name signifies "bas pays littoral," which accords exactly with

[p.503]: Hwen Thsang's description of it as a low, moist country on the seashore. The inhabitants were short and black, as is the case at the present day with the people of Lower Bengal. From all these concurrent facts, it is certain that Samatata must be the Delta of the Ganges ; and as the country is described as 3000 li, or 500 miles, in circuit, it must have included the whole of the present Delta, or triangular tract between the Bhagirathi river and the main stream of the Ganges.

Hwen Thsang mentions several countries lying to the east of Samatata, but as he gives only the general bearings and not the distances, it is not easy to identify the names. The first place is Shili-cha-ta-lo, which was situated in a valley near the great sea, to the north-east of Samatata[7] This name is probably intended for Sri-Kshatra, or Sri-Kshetra, which M. Vivien de Saint-Martin has identified with Sri-hata, or Silhat, to the north-east of the Gangetic Delta. This town is situated in the valley of the Megna river, and although it is at a considerable distance from the sea, it seems most probable that it is the place intended by the pilgrim. The second country is Kia-mo-lang-kia, which was situated beyond the first, to the east, and near a great bay. This place may, I think, be identified with the district of Komilla, in Tipera, to the east of the Megna river, and at the head of the Bay of Bengal. The third country is To.lo.po.ti, which was to the east of the last. M. Julien renders the name by Dwaravati, but he makes no attempt to identify it. I would, however, suggest that it may be Talaingvati, that is, the country of the Talaings, or Pegu. Vati is

[p.504]: the common termination of the names of the Burmese districts, as Hansavati, Dwayavati, Dinyavati, etc. The next name is I-shang-na-pu-lo, which was to the east of the last ; then still further to the east was Mo-ho-chen-po, and beyond that to the south-west was the kingdom of Yen-mo-na-cheu. The first of these names I take to be the country of the Shan tribes, or Laos ; the second is probably Cochin China or Anam; and the third, which M. Stanislas Julien renders by Ya-mana-dwipa, is almost certainly Yava-dwipa, or Java.