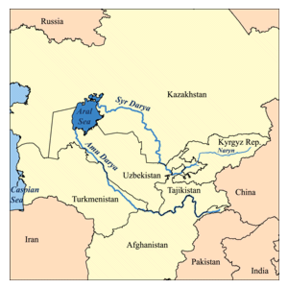 Map of Uzbekistan in Central Asia

Uzbekistan is the only doubly landlocked country in Central Asia. It shares borders with Kazakhstan to the west and to the north, Kyrgyzstan and Tajikistan to the east, and Afghanistan and Turkmenistan to the south. Before 1991, it was part of the Soviet Union. 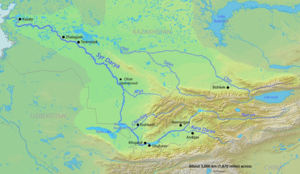 In the first millennium BC, Iranian nomads established irrigation systems along the rivers of Central Asia and built towns at Bukhoro and Samarqand. These places became extremely wealthy points of transit on what became known as the Silk Road between China and Europe.

In the seventh century AD, the Soghdian Iranians, who profited most visibly from this trade, saw their province of Mawarannahr overwhelmed by Arabs, who spread Islam throughout the region.

Under the Arab Abbasid Caliphate, the eighth and ninth centuries were a golden age of learning and culture in Mawarannahr. As Turks began entering the region from the north, they established new states, many of which were Persianate in nature.

After a succession of states dominated the region, in the twelfth century, Mawarannahr was united in a single state with Iran and the region of Khwarezm, south of the Aral Sea.

In the early thirteenth century, that state was then invaded by Mongols, led by Genghis Khan, under whose successors saw the displacement of Iranian-speaking communities from some parts of Central Asia.

Under Timur (Tamerlane), Mawarannahr began its last cultural flowering, centered in Samarqand. After Timur the state began to split, and by 1510 Uzbek tribes had conquered all of Central Asia.[2]

In the sixteenth century, the Uzbeks established two strong rival khanates, Bukhoro and Khorazm. In this period, the Silk Road cities began to decline as ocean trade flourished. The khanates were isolated by wars with Iran and weakened by attacks from northern nomads.

In the early nineteenth century, three Uzbek khanates—Bukhoro, Khiva, and Quqon (Kokand)—had a brief period of recovery. However, in the mid-nineteenth century Russia, attracted to the region's commercial potential and especially to its cotton, began the full military conquest of Central Asia. By 1876 Russia had incorporated all three khanates (hence all of present-day Uzbekistan) into its empire, granting the khanates limited autonomy. In the second half of the nineteenth century, the Russian population of Uzbekistan grew and some industrialization occurred.[3]

Krishna Chander Dahiya[5] gives account of Migration of Dahiyas from Fargana (Uzbekistan) in Fergana Valley of southern Central Asia. He writes that all 42 villages of Rohtak/Sonipat area spread from Barona. They came to Barona from Dadrerra/Hatra/Churu-Ganganagar. They lived there for long time. There Dahiyas came from Dahiya Barr near Harappa situated between Multan and Sialkot. Dahiya Jats came there about 400 AD or beyond. They came to Dahiya Barr from Susa/Suss/Iranian cities. They came to Susa from Dahia near Fargana before 3300-3500 BC. [6]

Names are given below in the Uzbek language, although numerous variations of the transliterations of each name exist. The provinces are further divided into districts (tuman). Major cities include Andijan, Bukhara, Samarkand, Namangan and the capital Tashkent.