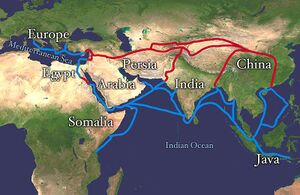 Silk Road or Silk Route was historical network of interlinking trade routes across the Afro-Eurasian landmass that connected East, South, and Western Asia with the Mediterranean and European world, as well as parts of North and East Africa.

The "Silk Road" originated during the 1st century BC, following efforts by the Yuezhi (Jats) and Xiongnu in the Tarim Basin to consolidate a road to the Western world and India, both through direct settlements in the area of the Tarim Basin and diplomatic relations with the countries of the Dayuan, Parthians and Bactrians further west. The Silk Roads were a "complex network of trade routes" that gave people the chance to exchange goods and culture.[1]

The central Asian sections of the trade routes were expanded around 114 BC by the Han dynasty, largely through the missions and explorations of Zhang Qian.

The main traders during Antiquity were the Indians and the Bactrians. They were followed by Sogdians from the 5th to the 8th centuries and then came the Arab and Persian traders on the scene.

The expansion of Scythian culture (Jats) stretching from the Hungarian plains and the Carpathians to the Chinese Kansu Corridor and linking Iran, and the Middle East with Northern India and the Punjab, undoubtedly played an important role in the development of the Silk Road. Scythians accompanied the Assyrian Esarhaddon on his invasion of Egypt, and their distinctive triangular arrowheads have been found as far south as Aswan. These nomadic peoples were dependent upon neighbouring settled population for a number of important technologies, and in addition to raiding vulnerable settlements for these commodities, also, encouraged long distance merchants as a source of income through the enforced payment of tariffs. Soghdian Scythian merchants played a vital role in later periods in the development of the Silk Road.

Soon after the Roman conquest of Egypt in 30 BC, regular communications and trade between China, Southeast Asia, India, the Middle East, Africa and Europe blossomed on an unprecedented scale. The Greco-Roman trade with India started by Eudoxus of Cyzicus in 130 BC kept on increasing, and according to Strabo (II.5.12), by the time of Augustus, up to 120 ships were setting sail every year from Myos Hormos in Roman Egypt to India.[2]

Following Important places and regions of Central Asia are connected with Silk Route and Jat history as well. There is a need to further research the matter.