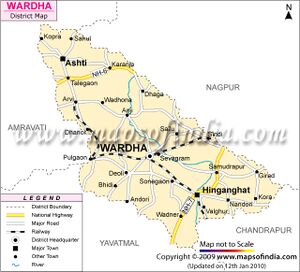 Wardha gets its name from the Wardha River which flows at the North, West and South boundaries of district.

The Wardha River (Varada River,is one of the biggest rivers in Vidarbha region in India. The Wardha River joins the Penganga River south of Chamorshi and forms the Pranahita River at Adilabad District, Telangana.

Origin - Wardha originates at an altitude of 777 meters Satpura Range in village Khairwani near Multai, Betul District of Madhya Pradesh.

Course - From the origin it flows 32 km in Madhya Pradesh and then enters into Maharashtra. After traversing 528 km, it joins the Wainganga forming the Pranahita, which ultimately flows into the Godavari River.

It was included in the empire of the Mauryas, Sungas, Satavahanas and Vakatakas. Pravarapura, modern Pavnar was once the capital of the Vakataka dynasty. Vakatakas were contemporary of Imperial Guptas. Prabhavatigupta, the daughter of Chandragupta II (Vikramaditya) was married with Vakataka ruler Rudrasena. The period of Vakatakas was 2nd to 5th century CE. The empire stretched from the Arabian sea in the west to the Bay of Bengal in the east, and from the Narmada river in the north to the Krishna-Godavari delta in south.

Later on, Wardha was ruled by the Chalukyas, Rashtrakutas, Yadavas, the Delhi Sultanate, the Bahamani Sultanate, Muslim ruler of Berar, Gonds and Marathas. Raja Buland Shaha of Gonds, Raghuji of Bhonsale were the prominent rulers in the Medieval period.

During the 1850s Wardha, (then a part of Nagpur) felt into the hands of British. They included Wardha in the Central Provenance.

Back to Maharashtra Back to Rivers