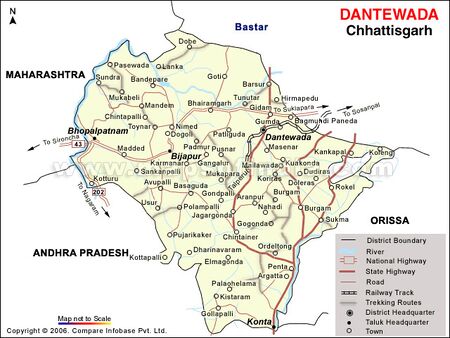 Barsur (बारसूर) is a village in Dantewara tahsil of Chhattisgarh. It was during the reign of Dalpat Deo that the capital of their kingdom was shifted from Barsur to Jagdalpur.

Located on the banks of the Indrawati river, about 75 km (a one and a half to two hour drive) to the south west of Jagdalpur, Barsoor was once an epicentre of Hindu civilization. It is believed that there were once 147 temples and an equal number of ponds here. The ruins of these temples, dating back to the 10th and 11th centuries (i.e. over 1,000 years) can still be seen today; they contain some notable images of Lord Vishnu. One Shiva temple, with 12 carved stone pillars, has nude figures on the outside. Another Shiva temple has 32 carved stone pillars, a black granite Nandi (Shiva's carrier) bull, and two sanctum sanctorum, with a common court. The ruins of this temple have been recently restored. A 50 foot high temple, known locally as Mama-bhanja-ka-mandir (temple of the maternal uncle and nephew), is in good condition, but lacks an idol. It is not clear to which deity the temple was consecrated, or even if it was ever consecrated. The biggest attraction is the Ganesha Temple. While the temple itself is in ruins, two sandstone images of Ganesh, both in the aspect of Maha-Ganapati, are still intact. The larger of these is about 8 feet high and over 17 feet wide.

This inscription is now in the Nagpur Museum. It ia a slab 9' 2" long, 14" broad and 3-1/2" thick, broken into two pieces. The inscribed portion of each flat side is about 4-1/2', thus leaving half of the pillar buried underground. As the whole of the inscription could not be completed within the allotted space, the remaining portion has been inscribed on the third side, on which the writing runs to the length of 31". The stone is stated to have been brought from Kowtah near Sironcha, but the Tahsildar of Sironcha informs me that it was never sent from that place.

The stone is indisputably from Barsur. Happily Col. Glasfurd has given a facsimile in his report on the Dependency of Bastar. Speaking of the Barsur temples he says: "In front of (this temple I found a slab with an ancient Sanskrit and Telugu inscription on both sides ; part of it had been broken off and was nowhere to be found. After offering a reward and causing search to be made I had the satisfaction of obtaining it. As the Telugu is of an antiquated character, I regret to say I have not succeeded in obtaining an accurate translation of the inscription. A facsimile is appended. From what I can ascertain it would appear that the temple of Mahadeva where the slab was found was built by a Raja Somesvaradeva, a Nagavanshi Kshatriya, in the Saka year 1130."

The inscription is in the Telugu character, and the language is also Telugu prose, the birudāvali or titles of the king being in Sanskrit and corresponding with those in the Narayanpal Sanskrit inscription. It records that Ganga-mahādevi, the chief queen of Somesvaradeva gave a village named Keramaruka or Keramarka to two temples of Siva (both of which she had built) on Sunday, the 12th tithi of the bright fortnight of Phalguna in the Saka year 1130. The two temples referred to here still exist, having one common mandapa, and from local enquiry it appears that it was from this place that Col. Glasfurd removed the slab.

Although the names of the temples Virasomesvara and Gangadharesvara given after the royal couple as recorded in the grant, are forgotten, a tank still remains which is called Gangasagar and retains the memory of the charitable queen Ganga-mabadevi. If the Somesvara of this inscription is identical with that of Narayanpal, there has apparently been a mistake in engraving the date which should be 1030 and not 1130, and that is perhaps the reason why the week day does not correspond with the tithi given there, viz,, the 12th of the bright fortnight of Phalguna, on a Sunday. According to Mr. Dikshit's calculations, Phalguna Sukla 12 of Saka-Samvat 1130 ended on Wednesday. So it was concluded that the year meant was Saka 1131 expired, in which year the tithi given in the inscription fell on a Sunday, But on calculating the week day for the same tithi in Saka 1030 expired I find that it also fell on Sunday. Prof. Kielhorn has kindly calculated the date and finds that Saka 1030 Phalgtuia Sudi 12 Sunday regularly corresponds to Sunday, 14th Feb. A.D. 1109. In the Narayanpal inscription it is stated that the grant of Narayanapura was made in Saka 1033, in the reign of Kanharadeva, who had succeeded his father Somesvaradeva on his death. And as there is nothing to show at present that there were two Somesvaras, the date 1030 fits in very well. It, however, seems somewhat extraordinary that such a palpable mistake should have been allowed to remain when it could be corrected by joining together with a curved line the two ends of the Telugu which is like an egg half-cut (at least it is so in the inscription) thus transforming easily the second 1 of 1130 into a zero. I am very reluctant to suppose that the engraver committed a mistake, but that he did is patent enough in this case whether we read 1030 or 1130. The village Keramaruka may be identified with Kodmalnar, which is situated quite close to Barsur and is said to have been mu'afi or exempt from the payment of taxes for a long time.