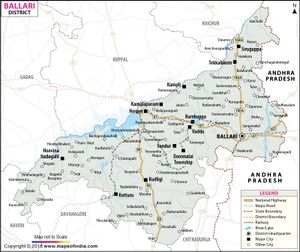 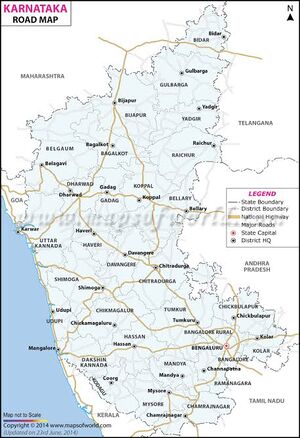 Bellary (बेल्लारी), officially Ballari, in the eponymous Bellari district, is a city and district in the state of Karnataka, India.

It is 311 km from the state capital of Bangaluru and 358 km from Hyderabad.

1. Kuntala Desha: Ballari was once part of an area also known as Kuntala Desha [1] [2] or Kuntala Vishaya (Vishaya – a territorial division or district of a kingdom). Many inscriptions refer to the Western Chalukyas as rulers of Kuntala or Kondala.[3][4]

2. Sindavadi: An inscription during the Gangas of Talakadu speaks of a certain Sindha Vishaya, which consists parts or whole of today's Ballari, Haveri, Gadag, Dharawada, Koppala and Bagalakote districts.[5] Many inscriptions by Yadavas[6] and Kalyani Chalukyas[7] refer to this areas as Sindavadi or Sindavadi-nadu (Sindavadi-1000).

3. Nolambavadi: During the rule of Western Chalukyas, the area around Bellary was part of Nolambavadi (referred to as Nolambavadi-32000), which included parts of the present Shivamogga, Chitradurga, Davanagere, Ballari and Anantapuram Districts.[8] Further, some inscriptions mention that Nolambavadi-nadu was a part of Kuntaladesha [9]

300 BCE – 1336 AD: Bellary was ruled in succession by the Mauryas, Satavahanas, the Pallavas, the Kadambas, the Badami Chalukyas, the Rashtrakutas, the Kalyani Chalukyas, the Southern Kalachuryas, the Sevuna Yadavas, and the Hoysalas.

The Bellary area was also ruled briefly by the Cholas during the wars between Kalyani Chalukyas and the Cholas (often involving Vengi Chalukyas), the region constantly changing hands under turmoil.

A dynasty called Ballariya Naredu ruled Bellary under the Hoysalas.[10]

Later in the 11th century AD, they ruled parts of Nolambavadi under Western Chalukyas and Hoysalas.[12]

1100–1188 AD: Feudatories of Kalyani Chalukyas, Kalachuryas and Hoysalas, calling themselves Pandyas (Nolambavadi Pandyas), ruled parts of Nolambavadi-32000. They were actively involved in the conflicts amongst their overlords.[13]

A French engineer was the architect and builder of the Lower Fort. He refurbished the Upper Fort also. After the forts were completed, Haider Ali found that the forts built were at a lower elevation vis-a-vis an opposite hill called the 'Kumbara Gudda', thus putting the new forts militarily at a strategic disadvantage. As a result, Haider Ali was annoyed with this lapse and it is said that he ordered hanging of the French engineer at the east gate of the fort. The French engineer's grave, dated 1769 (inscribed as unknown French Engineer), is located at the east gate of the fort and has been preserved due to efforts of local Muslims who also claim that it was the tomb that belonged to a Muslim saint.[15]

The forts have fine ramparts with a rich history with several historical and religious monuments. A citadel was in the upper fort with several ancient tanks while the lower fort on the east housed the arsenal.[16]

There are several legends attributed to Bellary, the city where the fort is located.

A mythological legend states that the city is named after Indra, the king of gods, who destroyed the Rakshasa (demon) ‘‘Balla’’ who resided in the area.[17]

Another ancient legend links this place to some events in the epic Ramayana. It is said that Rama while searching for Sita met Sugreeva and Hanuman at a place near Hampi, 30 kilometre, from Bellary, the celebrated capital of the Vijayanagara Empire.[18]

The historically linked legend states that Bellary is the name derived from the old Kannada word “Vallari” and “Vallapuri”. An inscription from the time of the rule of Ganga Dynasty of Talakad, testifies to the territory of Sindha Vishaya, which today consists of Bellary and Dharwad districts. In the Hoysala period, the dynasty of "Bellariya Naredu" had sovereignty over Bellary when it was known as Kuntala Desha, though it subsequently came to be known by the name ‘Vallari-Vallapuri’.[19]