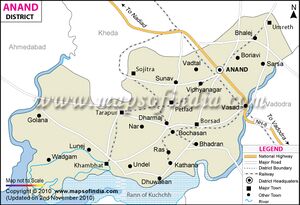 Khambhat (Hindi:खंभात, Gujarati:ખંભાત) , also known as Cambay, is a town and the surrounding urban agglomeration in Khambhat Taluka, Anand district in Gujarat. It was once an important trading center, but its harbour gradually silted up, and the maritime trade moved elsewhere.

Khambhat lies on an alluvial plain at the north end of the Gulf of Khambhat, noted for the extreme rise and fall of its tides, which can vary as much as thirty feet in the vicinity of Khambhat. Khambhat is at 22.3°N 72.62°E. It has an average elevation of 8 metres. The land on which Khambhat sits is the silt deposited by Mahi River.

Some people believe that the town of Khambhat may be the Camanes of Ptolemy. James Tod believes that the name comes from the Sanskrit Khambavati or 'City of the Pillar'.

Khambat is perhaps the only place in India, where the Harappan craft – the agate bead making is found in the living tradition. Surprisingly Khambat has no stone deposit. But the craft has survived mainly through acquiring stones from the Rajpipla hills, about 200 km away from the town. In the folklore of Khambat the beginning of the craft is attributed to Baba Ghor, a 1500 AD saint from Ethiopia who had led a large contingent of Muslims to settle in the town. However, in the archaeological record the origin of the craft can be traced to the nearby Lothal, a Harappan outpost flourished about 4000 years ago.

Cambay was formerly a flourishing city, the seat of an extensive trade, and celebrated for its manufactures of silk, chintz and gold stuffs. The Arab traveler al-Mas'udi visited the city in 915 AD, describing it as a very successful port.

It was mentioned in 1293 by Marco Polo, who, calling it Cambaet, noted it as a busy port. He mentions that the city had its own king. Indigo and fine buckram were particular products of the region, but much cotton and leather was exported through Cambay. A contemporary Italian traveler, Marino Sanudo, said that Cambeth was one of India’s main two ocean ports.

Another Italian, visiting in about 1440, Niccolò de' Conti, mentions that the walls of the city were twelve miles in circumference.

The Portuguese explorer Duarte Barbosa visited the city, which he calls Cambaia, in the early sixteenth century.[1] His description of the city is very full, he states:

"Entering by Cuindarim, which is the internal river, there is great and beautiful city that they call Cambaia, populated by Mouros (Muslims) and Hindus (Gentios). It has many beautiful houses, very high with windows, and covered with tiles in our manner. The streets are laid out well, with pretty squares and large buildings."

He describes the city as very busy and affluent, with merchants coming frequently by sea from the world around.

Owing principally to the gradually increasing difficulty of access by water by the silting up of the gulf, its commerce has long since fallen away, and the town became poor and dilapidated. The spring tides rise upwards of 30 ft and in a channel usually so shallow that it is a serious danger to shipping. By 1900, the trade was chiefly confined to the export of cotton. The town was celebrated for its manufacture of agate and carnelian ornaments, of reputation, principally in China.

The houses in many instances are built of stone (a circumstance which indicates the former wealth of the city, as the material had to be brought from a very considerable distance); and remains of a brick wall, three miles (five km) in circumference, which formerly surrounded the town, enclose four large reservoirs of good water and three bazaars. To the southeast there are very extensive ruins of subterranean temples and other buildings half-buried in the sand by which the ancient town was overwhelmed. These temples belong to the Jains and contain two massive statues of their deities: one black, the other white. The principal one, as the inscription intimates, is Pariswanath or Parswanath, carved in the reign of the emperorAkbar; the black one has the date of 1651 inscribed.

Khambhat was the capital of Cambay State, a princely state of British India. It was the only state in the Kaira Agency of the Gujarat division of Bombay Presidency. It had an area of 906 km². It was founded in 1730, at the time of the dismemberment of the Mughal Empire. Its Nawabs were descendents of Mumin Khan, the last of the Mughal governors of Gujarat who in 1742 defeated his brother-in-law Nizam Khan, governor of Khambhat, and established himself there.

In 1780 Cambay was taken by the army of general Goddard Richards, but it was restored to the Marathas in 1783. Finally it was ceded to the British by the Peshwa under the treaty of 1803. The state was provided with a railway in 1901.

Balhara Kingdom - Balhara Jats were the rulers in Sindh from 8th to 10th century. In 710 AD Muhammad Qasim occupied Sindh. Brahman Raja Dahir was the ruler of Sindh at that time. Raja Dahirâ's father Chach killed the Jat ruler of Deol state Sahasi Rai II in year 650 by conspiracy and occupied the state. Other Jat states in Sindh were not powerful; they were also eliminated by the year 800 AD. This was the early period of Balhara Jat rulers in Sindh. Balharas ruled the area, which can be called as Bal Division. The area from Khambhat to Simari was under their rule and Manafir was their capital. [6] Manafir was probably Mandore or Mandwagarh.It is likely that after Nagas it was ruled by Balharas. The rule transferred from Balharas to Mauryas to Pawars to Chauhans to Parihars to Rathores.[7]

Sir Henry Eliot has mentioned that after defeat of Jat Raja Sahasi Rai II, Raja Matta of Shivistan attacked Alore (the capital of Chach) with brother of Raja of Kannauj and his army. The Jat Raja Ranmal was the ruler of Kannauj at that time. He was famous as Rana. After that the other Jat rulers were eliminated except the Balharas. The Balharas were strong rulers from Khambhat to Sambhar. There are seven tanks of Balharas, Banka tank in the name of Banka Balhara and Lalani tank in name of Lalaji. [8]

Parthian Stations by Isidore of Charax, an account of the overland trade route between the Levant and India, in the 1st century BCE, writes - § 18. Sakastana of the Scythian Sacæ is the modern Seistan. The Sacæ, formerly residents of Central Asia, were driven out by the Yue-chi and forced across the Pamirs into Bactria. About 100 B.C. the Yue-chi followed them, overran Bactria and upper India, and established the Kushan monarchy. The Sacæ, driven before them, occupied the country around Lake Helmund, and overran the lower Indus valley, and the Cutch and Cambay coasts of Western India. They were tributary in some degree to the Parthian monarchy, and in Indian history they appear as the "Indo-Parthians." Gondophares of the Acts of St. Thomas was an Indo-Parthians prince; the Periplus, about 80 A.D., mentions his quarrelling successors in the Indus delta, and a Saka satrap, Nahapana, who established a powerful state in the Cambay district and instituted the Saka era of 78 A.D. [9]

Sir H. M. Elliot[10] writes that The "Balhará" would thus seem to represent, as Tod affirmed, the Ballabh Ráís of Ballabhi-pura who were succeeded by the Bala Ráís of Anhalwára Pattan. Their territories included the ports in the country of Lata (Lárike) on the gulf of Cambay.