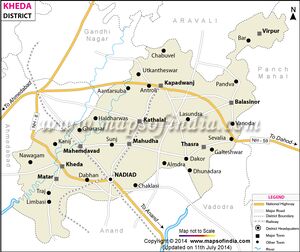 Kheda (खेड़ा) is a town and district in Gujarat.

Kheda, also known as Kaira, is 35 km from Ahmedabad. The National Highway no. 8 connecting Ahmedabad and Mumbai passes through Kheda. Kheda is on the bank of the river "Vatrak" and "Shedhi". Kheda is located at 22.75°N 72.68°E.

Kheda is an ancient place which was Visit by Xuanzang in 640 AD, who recorded it by the nae of Kie-cha. Alexander Cunningham[1] has identified Kie-cha with Kheda Gujarat.

The town of Kheda passed to the Babi family early in the eighteenth century, with whom it remained until 1763, when it was taken by the Marathas. The Marathas ceded the district to the British in 1803, and it became part of the Bombay Presidency of British India. It was a large military station until 1830, when the cantonment was removed to Deesa. Gujjars established many villages in the Kheda District area, as did Jats and other groups.

Kheda is also where Gandhi launched a Satyagraha struggle against oppressive taxation by the British at a time of famine.

Alexander Cunningham[3] writes that The district of Kie-cha, or Kheda, is placed by Hwen Thsang at 300 li, or 50 miles to the north-west of Malwa.[4] As both M. Stanislas Julien and M. Vivien de Saint-Martin render Kie-cha by Khacha, which they identify in the peninsula of Kachh, I am bound to state the ground on which I venture to propose a different reading. On looking over the other names in which the peculiar symbol cha is used, I find that it occurs in the well-known names of Patali-putra and Kukkuta, where it represents the cerebral ṭ, and again in O.cha-li, which M. Julien renders by Aṭali, and M. de Saint- Martin identifies with the desert region of the Thal, or Thar. Consistently, therefore, the name of Kie-cha should be rendered Khe-ta. Now Kheda is the true

[p.493]: Sanskrit form of Kaira, a large town of Gujarat, situated between Ahmadabad and Khambay; and I would therefore identify the pilgrim's Kie-cha with Kheda. It is true that Hwen Thsang's recorded distance is only 300 li, but there are so many mistakes in the bearings and distances of this part of the pilgrim's journey, that I have no hesitation in proposing a correction of the text, by reading 1800 li, or 217 miles, which is very nearly the exact distance between Kaira and Dhar. "When we remember that the province of Malwa was bounded on the east, within 25 miles, by the independent territory of Ujain, it is difficult to perceive how there could have been any other state within 50 miles of Dhar, otherwise the territory of Malwa would have been compressed to a breadth of about 50 miles, between Ujain and Kheda. But this difficulty is entirely removed by adopting my proposed correction, by which the district of Kheda becomes the extreme western division of the kingdom of Malwa. Hwen Thsang estimates its circuit at 3000 li, or 500 miles, a size which agrees very well with the probable limits of the district of Kaira, which may be stated as extending from the bank of the Sabarmati on the west, to the great bend of the Mahi river on the north-east, and to Baroda in the south. In shape it is a rough square.

The clans of Jats in Gujarat are similar to those of Jats of North India. The following clans are found in the Kheda District. The way they are written in Gujarati is given in brackets.[5] Kheda District is one of few districts in Gujarat with a Jat population (Banas Kantha, Mehsana, Sabar Kantha, Kachchh, etc.)[6]

Many of the villages have names based on the clans of Jats who inhabited them. These are some of those clans:

Rajputs in this District are usually of the Chauhan clan. There are Vohra/Vora Gujjar populations also.

There are many religious places to visit in Kheda.