Martand in Anantnag,Jammu and Kashmir

Martand (मार्तण्ड) (Martanda) is an ancient historical place in Anantnag district of Jammu and Kashmir.

Located in north east of Anantnag on Anantnag-Pahalgam Road.

The temples included one for Vishnu (Muktakeshva) where according to Kalhana the emperor used 84,000 tolas of gold to make the image of Vishnu. In another temple he used as many Palas of silver for the image of Parihaskesana. He also had made a statue of Buddha in copper that according to Kalhana “reached up to the sky.” The main temple was larger than the famous temple that Lalitaditya built in Martand. [1][2]

Lalitaditya Muktapida was able to extend the power of Kashmir beyond the normal mountain limits and in about 740 AD inflicted a defeat upon Yasovarman, the King of Kannauj. Lalitaditya was able to vanquish the Turks, Tibetans, Bhutias, Kambojas and others. The Martand complex of temples in the Anantnag district of today’s Kashmir perpetuate the memory of King Lalitaditya. These details are described in the Rajatarangini of Kalhana.

Rajatarangini[3] tells Neither in the capital, nor in towns or villages, was there a temple left from which the idol was not taken out by Haraha the Turushka. Two influential gods were beyond his power, Shriramasvami in the capital, and Martanda at Pattana.

Dr. Raghu Nath Singh of Benaras, who has translated Jonraja's Rajatarangini into English, maintains, there were originally about three hundred Hindu tirthas in Kashmir, which were considered important and had each a special significance of its own for the devotees. Kalhana makes a specific mention of tirthas like Kapteshwara, Jwala Mukhi, Chakreshwara, Martanda, Sarda and some others. M. Arel Stein, who visited the religious shrines mentioned in Kalhana's Raj Tarangini.

Rajatarangini[5] tells us that .... When the tumults raised by Trillaka were quelled, he thought that even burning in fire would be a relief to his body. He delayed to escape in time by the mountain road which was devoid of snow, thinking that such escape was impossible, and that he would be caught in attempting it. Therefore while the sensible Trillaka waited for an opportunity to depart, Sanjapala commenced to pursue him, without further deliberation. That great hero Trillaka who rested but little, stopped at Martanda with many good warriors of Devasarasa.

[p.304]: That country was easily accessible to the opponents, nor was he so vain as to think that the hostile soldiers who were beyond Martanda were weak. The followers of Trillaka who had not their arrows near at hand, fought with their enemies; nor did they display cowardice. The Lavanya, with his unlimited soldiers and with the Damaras of several places, and with the whole strength, fought there in anger with those who were running. The men of Devasarasa fled, full of plundered riches. They felt the power of Sanjapala. When the whole place was covered by rain and by enemies, the soldiers looked like the Kula mountains.* They who had been exposed to the powerful rays of the sun, had long withstood the rage of the foes and had destroyed several of the enemy's soldiers, were slain in these battles. The other party, when they had slain all the heroes in battle, reached Mandala. The people of Marttanda were also thickly wounded.

Gayāpāla, son of Sanjapala, became distinguished in this battle. When three horses were killed under him, he fought on foot for want of a fourth, and was unobserved. His younger brother, the boy Jarjja, who fought for the first time in this battle, astonished the heroes who had witnessed innumerable great battles. He cut down the handsome right hand of the lord of Kampana. The sun torments large elephants and the hyppopotamus

* The seven great mountains that are believed to have kept, their heads above the water at the deluge.

[p.305]: breaks their tusks. The lord of Kampana ran on horse- back, displayed his weapon in one hand and looked like a forest fire with a column of smoke on a winged mountain.* In this fierce battle with the enemies, the horse, put to flight by a wound inflicted by an arrow, ran backwards and threw him down from its back. Owing to the weight of his armour and to the heavy fall on the surface of the ground, he became senseless, and was carried away by his two sons from among the enemies. When the army was completely destroyed, his men cast him in the courtyard of the temple of Marttanda, out of the sight of the enemies, and fled. The lord of Kampana departed with the whole of the large army and found the Damara who was there, and crushed him.

When the king came to Vijayakshetra, Sanjapala completely burnt the broken house of the Lavanya. The king frowned in anger, and the Lavanya, though reduced to that plight, was not reduced to poverty. He had plenty of food in the rows of villages in the mountains. He had no friends, and was sent away out of his family, and was rebuked by servants whose wisdom becomes cheap at the time of distress. His hand was cut, and owing to the helplessness of his condition, he gave up his head as an offering to the anger of the king, as one gives a fruit to Tishnu. 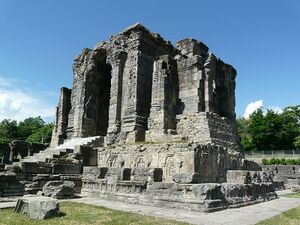 Mārtanda (Sanskrit:मार्तंड) in Hinduism is the eighth and last of the Vedic solar deities called Adityas. He is known as an Aditya by virtue of being born to Aditi.

Etymology: Mârtânda is etymologically derived from mârta meaning “dead or undeveloped,” (being connected with mrita, the past participle of mri to die) and ânda, an egg or a bird; and it denotes a dead sun, or a sun that has sunk below the horizon.[6]

In the post-Vedic period, when the number of Adityas increased to twelve, another name Vivasvat was added to the canon. Vivasvat and Martanda are often used interchangeably.

Martand Sun temple in Anantnag, Jammu and Kashmir is dedicated to Mārtanda. Though the temple is in ruins and Martanda is not venerated as earlier.

And of Vivaswat was born the lord Yama. And Martanda (Vivaswat) also begat another son after Yama, gifted with great intelligence and named Manu. And Manu was endued with great wisdom and devoted to virtue. And he became the progenitor of a line. And in Manu's race have been born all human beings, who have, therefore, been called Manavas.