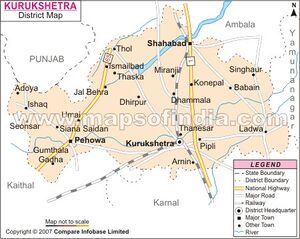 Location of Pehowa in Kurukshetra District

Its ancient name was Prithudaka (पृथूदक). According to Alexander Cunningham[1] writes that place gets name after Raja Prithu whose father Raja Vena was cured here. Prithudaka means Prithu's pool, from daka or udaka water.

Vana Parva, Mahabharata/Book III Chapter 81 explains the importance of Prithudaka in verses (III.81.122-29)...."One should next proceed, O king, to the tirtha celebrated over the three worlds, which is called Prithudaka (पृथूदक) (III.81.122)[2], belonging to Kartikeya. One should bathe there and occupy oneself in the worship of the Pitris and the gods. Whatever evil hath been committed, knowingly or unknowingly, by man or woman, impelled by human motives, is all destroyed, O Bharata, by a bath in that tirtha. Bathing there one obtaineth, too, the merit of the horse-sacrifice and heaven also. The learned have said that Kurukshetra is holy; that holier than Kurukshetra is the Saraswati; that holier than the Saraswati are all the tirthas together, and that holier than all the tirthas together is Prithudaka (III.81.125)[3]. He that engaged in the recitation of prayers casteth off his body at Prithudaka (III.81.128)[4] </ref>, which is the best of all tirthas, becometh an immortal. It hath been sung by Sanatkumara and by the high-souled Vyasa, and it is in the Vedas also, that one should, O king, go to Prithudaka (III.81.127)[5], with subdued soul. O son of Kuru race, there is no tirtha which is superior to Prithudaka[6]. Without doubt, that tirtha is purifying, holy and sin-destroying."

References about Pehowa are found in Vaman Purana and the epic Mahabharata.

Mentioned as 'Prithudaka' in the epic Mahabharata named after the King Prithu who prayed for the salvation of his father's soul here. This is the site where tradition of Shraddha to fathers is offered.

Hukum Singh Panwar (Pauria) writes: Investigations show that the Sobii, Sophites, Kathai & Malli, being cognate tribes, were intimately connected with each other and also with the Gakhars and Taxili (Takasali or the Takkas or Takshakas). Daci (Daki in Jatu dialect) and Dacia of Roman history or Dasyu of Sanskrit or Dasae of Stephen us Byzantinus are Dahae or Tahae of the Chinese, a tribe of the eastern Scythians, the Massagetae. Meds or Medi or Mand or Mind or Mandrueni or Mandueni or Mers or Moedi of Strabo (enemies of Jats) still found in the Rechna and Sindh-Sagar Doabas, were the first Indo-Scythian conquerors of the Punjab from Mandrus river to the South of the Oxus or they were Thracian Getae. The Mogas or Mogars, founder of Moga or Moog-nagar on the east bank of the Jhelam, were the Parthians, descendents of Prithu, an important section of the Sakas. Interestingly, Arjuna, the Pandava hero in the Mahabharata war, is addressed by Krishna, his charioteer friend, as Partha. Prithudaka (modern Pehowa) in the Kurukshetra region was, according to O.P. Bharadvaja (1986: 197f), the original home of Prithus or Parthas. The ancient Parthia must have owed its name to the Parthian emigrants from the eastern part of Sapta Sindhu.[8]

Excavations of various archeological sites in Haryana, including Pehowa, have evidence of pre-Harappan and Harappan culture. Findings of pottery, sculpture and jewellery in sites at Pehowa, have proved the historicity of the Mahabharata war.

The place boasts of existence from AD 882 but an inscription written on it states that it was actually built in AD 895. Another version suggests it's nascent days to be during the reign of King Mahenderapal.

Bhim Singh Dahiya[9] writes that Pahewa inscriptions of a Tomar family gives the names of their three generations, and says that the family sprang from a king Jaula, who lived ages ago.[10]

Visit by Xuanzang in 634 AD

Alexander Cunningham[11] writes that The old town of Pehoa or Prithudaka is situated on the south bank of the Sarasuti, 11 miles to the west of Thanesar. The place derives its name from the famous Prithu Chakra-vartti, who is said to have been the first person that obtained the title of Raja. At his birth, according to the Vishnu Purana,[12] "all living creatures rejoiced," because he was born to put an end to the anarchy which then prevailed over the whole earth. The story of the cure of Raja Vena's leprosy, by bathing in the Saraswati is told in the same Purana. On his death, his son Prithu performed the usual Sraddha, or funeral ceremonies, and for twelve days after the cremation he sat on the bank of the Saraswati offering water to all comers. The place was therefore

[p.337[: named Prithudaka or Prithu's pool, from daka or udaka water ; and the city which he afterwards built on the spot was called by the same name. The shrine of Prithudaka has a place in the Kurukshetra Mahatmya, and is still visited.

Besides the Peheva inscription of Mahendrapala (Ep. Ind., Vol. I, p. 244) shows that the Karnal district was a part of the Gurjara empire even under that monarch, and if this was the territory taken away by Samkaravarman, the event must be placed in the reign of Mahendrapaladeva. But although Mahendrapaladeva might have been less successful in the west, he was more fortunate than his father in his eastern conquests. The Guneriya (गुणेरिया) and the Ramagaya (रामगया) inscriptions, dated respectively in the years 8 and 9 of Mahendrapala, seem undoubtedly to point out, as Mr. R. D. Banerji contended, that the province of Magadha had at last passed into the hands of the Pratiharas.

Ram Sarup Joon[13] writes that ...The Pehwa edict describes the rule of three Tomar kings. It is mentioned that they were the descendants of 'Jabala', the Hun who had ruled there before them- the third edict narrates the rule of Jabla Toraman.

There is an old saying in Rohilkhand that the Chief Toraman Kachwaha attacked Iran in 943 A.D. He conquered the territory from Iran to Bhopal. He constructed a fort at Gwalior. The descendants of Bhur Sen came to be called Kachhwaha in 945 A.D., and ruled Gwalior till 933 A.D., when Pratihars seized power. Therefore, if we accept this the Kachwaha Rajputs are the descendants of Torman, Jabla Gujars.

Charak Rai (the Bhat] who lived during the reign of Emperor Shah Jehan writes that the king of Iran was Torman. Shri Bhanderkar and General Cunningham and Mr. Smith all prove that Torman, Kachwaha and Pratihars are all descendants of Jabla Gujars. One of the edicts of Hun Chief Jabla was excavated in Malwa, at Mandsor, and is said to have been inscribed in 533 A.D.

According to this edict King Meharkul was the son of Torman, who was defeated and driven out by Yashodharaman.

Legend also says that it was created by Brahma himself.

There is one Saraswati temple here,Its believed that sage Vishwamitra attained the title of "Brahmarishi' here. A temple dedicated to Lord Shiva is the major attraction of Pehowa; the temple has no 'linga' but a panch-mukhi (5 faced) idol of Lord Shiva has been installed, which is said to be only one of its kind in the state. Scores of pilgrims visit Pehowa to take a dip at the Saraswati Tank on the occasion of Chaitra Chaudas. Jyotisar, Aruna Teerth and Bhadrakali Temple are some other spots worth visiting around.