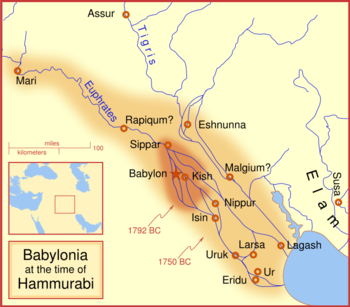 Ur (Sumerian: Urim; Sumerian Cuneiform: 𒋀𒀕𒆠 URIM2KI or 𒋀𒀊𒆠 URIM5KI; Akkadian: Uru; Arabic: أور‎) was an important Sumerian city-state in ancient Mesopotamia located at the site of modern Tell el-Muqayyar (Arabic: تل المقير‎) in Iraq's Dhi Qar Governorate. Once a coastal city near the mouth of the Euphrates on the Persian Gulf, Ur is now well inland, south of the Euphrates on its right bank, 16 Km from Nasiriyah.

The city dates from the Ubaid period circa 3800 BC, and is recorded in written history as a City State from the 26th century BC, its first recorded king being Mesh-Ane-pada.

According to James Todd[1] One great arm of the tree of Yayati remains unnoticed, that of Uru or Urvasu, written by others Turvasu. Uru was the father of a line of kings who founded several empires. Virupa, the eighth prince from Uru, had eight sons, two of whom are particularly mentioned as sending forth two grand shoots, Druhyu and Bhabru. From Druhyu a dynasty was established in the north. Aradwat, with his son Gandhara, is stated to have founded a State : Prachetas is said to have become king of Mlecchhades, or the barbarous regions. This line terminated with Dushyanta, the husband of the celebrated Sakuntala, father of Bharat, and who, labouring under the displeasure of some offended deity, is said by the Hindus to have been the cause of all the woes which subsequenty befell the race. The four grandsons of Dushyanta, Kalanjar, Keral, Pand, and Chaul, gave their names to countries.

Aurva (और्व), a Vatsa Bhrigu Pravara, is mentioned by Panini in Ashtadhyayi. [2]

The city's patron deity was Nanna (in Akkadian Sin), the Sumerian and Akkadian (Assyrian-Babylonian) moon god, and the name of the city is in origin derived from the god's name, URIM2KI being the classical Sumerian spelling of LAK-32.UNUGKI, literally "the abode (UNUG) of Nanna (LAK-32)".[3]

The site is marked by the ruins of the Ziggurat of Ur, which contained the shrine of Nanna, excavated in the 1930s. The temple was built in the 21st century BC (short chronology), during the reign of Ur-Nammu and was reconstructed in the 6th century BC by Nabonidus, the Assyrian born last king of Babylon.

Hukum Singh Panwar (Pauria)[4] states: "Mohanjodaro sold its seals at Ur and Kish. The humped bull of tile Guts of the Indus valley was developed as winged sentinel of Assyrian palaces at Nineveh. It is represented as human-headed & bearded emblem of bull-god of prosperity on the columns of Apadan. The Indus bull created the Apis bull of the Egyptians. The Indus metric system standardised the weights and measures of Mesopotamia and further west. The cheque and banking system of the Panis (Phoenicians) of the Sapta Sindhu and their coins struck and minted at Carthage, Sodom and Tyre, after migrations there, became models for the currency and banking in the west. All these are the solid proofs, now universally accepted, of the migrations to and occupations of those countries by Indians in the hoary past (B.S.Upadhayaya, 1973: 2).

Hukum Singh Panwar (Pauria) [5] states: Jamadagni is also represented as a composer of a number of Rigvedic hymns. Weber (1914: 315) and Brough (JRAS, 1947: 85), however, dismiss the Jamadagneyas as later interpolations. Brough even holds this family as of foreign origin (Ibid.: 88f). Pargiter also doubts their Aryan origin (1972: 307). To Waddell (1976: 29f, 45) they were of Sumerian origin. From Richika to Parasurama, they are designated as Aurva. This unmistakably indicates that they must have hailed from Ur or Uru, the capital of the third Priestly Ur Dynasty of Sumeria (Mesopotamia). C.V. Vaidya (1904: 20,163,168,170) rejects the Saraswati Upakhyana and Ramopakhya, dedicated to temples and shrines attributed to Renuka and her son, Parasurama, in northern India as well as the stories of Bhargava and Aurva as "clumsy interpolations" by Sauti Ugrashrava, a Bhargava author of the Mahabharata, in its GadaParva (Ch.35) and Vanaparva (Chs. 81-84). In the light of above array of evidence we may legitimately assert that the crafty Brahman writers of yore had no scruples in manipulating matters to their own advantage by glorifying or denigrating others at will as it suited them.

Hukum Singh Panwar writes: [6]: Parasurama, in all probability, was a historical personage but was made to carry 'parasu' (axe) to distinguish him from Rama Dashrathi. He lived at least thirty nine generations prior to the latter. He is described as belonging to the Ur family of the Kusha dynasty of the Guti race105. He reigned for nine years, established Brahmans as the first hereditary caste106, destroyed his sun-cult enemies (Haryasvas) besides slaying his mother who also probably followed this cult107 and arrogated himself his own deification in his own life time to vie with Indra, the Father-God, whom perhaps he remembered as a man108. The Ur dynasty was notorious for human sacrifices109. Woolley, Moortgat and Saggs110 confirm this. The Rig Veda, according to Wadell111 refers to his offering of human sacrifices which was abhorrent to Sun-worshippers, whose Solar priest was Visvamitra, an inveterate opponent of this practice of the Urvas (Bhrigus).