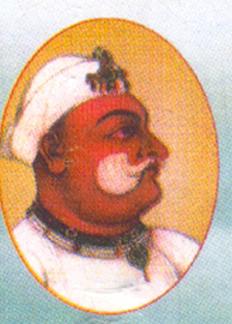 Ram Sarup Joon[1] writes that ... Thakur Badan Singh had conspired against his uncle Churaman and helped Raja Jai Singh in subjugating Jats. Consequently the title of Thakur was conferred upon Badan Singh by Raja Jai Singh and he was placed on the throne as a successor to Churaman. Badan Singh was an opportunist and after getting the power, did not remain loyal to Raja Jai Singh. He started consolidating his power and soon got rid of the domination of Jaipur and Ajmer. With the alliance of the Minas of Mewat, he started hostilities against Jaipur state. Raja Jai Singh found himself in a perilous situation due to Badan Singh's regular harassment. He tried to appease Badan Singh by giving him a Jagir with an annual income of 18 Lakhs. Thakur Badan Singh ardor cooled down and he constructed a fort at Vaer with this remuneration. At this time Nadir Shah invaded the Moghuls. Badan Singh exploited the opportunity and occupied several Moghul forts. He strengthened diplomatic relations with the Rathore Rajas. Abhai Singh and Ajit Singh, of Bundi who gave him the title of Brij Raj. The title was recognised by all the Rajas of that area. 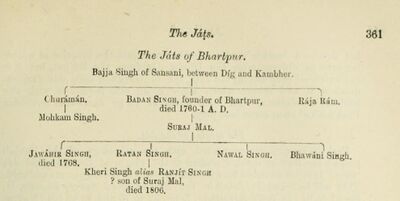 Badan Singh had issue, 26 sons. The list is as under:

On 18 November 1722 the Rajput Mughal combined army besieged the Thoon fort of Mohkam Singh, took it and got it ploughed by Asses. Thus the Jat state of Badan Singh rose from the asses of Thoon, Jatauli and other forts.

After the fall of Thoon and Jatauli, Badan Singh became formally a samant of Jaipur Darbar on 23 November 1722. Jai Singh in exchange honoured Badan Singh with the title of ‘Brijraj’ i.e. the king of Brij. He was permitted the use of ‘Nagara’, ‘Nishan’ and ‘Pachrang flag’ and gave the Kotwali of Agra. Besides, he was also given the Jagirs of Mathura, Vrindavan, Mahavan, Hisar, Chhata, Kosi and Hodal parganas for revenue of Rs. 50-60 lakh.

Expansion of the state

Badan Singh was not given the entire area in occupation of his uncle Churaman and his sons. He was only thakur of Deeg. Even then he maintained patience, political balance and loyalty to Jai Singh. He was clever enough to understand the circumstances of those times.

Badan Singh planned to win over the confidence of his own Jat community and at the same time maintaining a balance with Rajputs and Mughals. With this vision he established his permanent residence and office near Deeg. After this he planned to make friendly relations with the influencial zamindars and sardars of the Jat state. To implement his plan he married his most competent son Suraj Mal to Hansia, the beautiful daughter of most influencial Chaudhary of Jatwara Ratiram. He recruited all the people in the army of Mohkam Singh in his own army. Badan Singh himself established marital relations with chiefs of various groups. He had 25 Queens. This helped him to increase his influence. He took in his side not only Jats and Rajput groups but also Brahmans. He awarded titles like Faujdar, Bakhshi and Sardar to many powerful people to take them into his side. He also allured the Gujars of Deeg and Nagar parganas by awarding them with the title of ‘Dhau’. This way he became an undisputed leader of mass over vast areas.

Khemkaran Sogaria who was a close associate of Churaman was still against him. This problem was solved by his young son Suraj Mal. Suraj Mal eliminated Khemkaran and acquired Sogaria pargana from Khemkaran. Badan Singh also acquired 31 villages of Agra and the Jat dominated Kagaraul pargana on lease. With such a tact and vision Badan Singh could expand his state bigger than that of Churaman within a decade.

In this success there was a great contribution of Jai Singh. Jai Singh was governor of Agra Suba. Badan Singh often visited Jaipur Darbar as per Royal customs on the occasion of Dashhara by presenting gifts. He also constructed a palace in Jaipur for his residence. That area is known as Badanpura even today. Badan Singh never visited the Mughal Darbar even after inviting many times. He called himself a thakur and never treated himself as Raja. It was with a view to respect the feelings of people and protects his own self-respect.

Mev people inhabited areas surrounded by hills near the northern boundary of Bharatpur state. They were creating problems for people by looting them. Jai Singh also wanted to control them. The task of solving this problem was assigned to his son Suraj Mal and a close relative thakur Sultan Singh. They did it successfully. Surajmal was tactfully eliminating the Amils of Jaipur state and establishing his own Thanas. Badan Singh got the Jagir of Mewat for revenue of Rs. 18 lakh per annum.

Sawai Raja Jai Singh of Jaipur got the Subadari of Malwa in October 1729. He was ordered to move against the Marathas. The Kachwahas showed a great courage in the war against Marathas. Jats took part in this war against Marathas under the leadership of Suraj Mal. At the end of 1729 the Marathas were defeated in this war and Mandu came under Jai Singh.

Sawai Raja Jai Singh sent the army against Peshwa Bajirao to help Nizam-ul-mulk under the leadership of his son Iswari Singh and Diwan Raja Ayamal. Badan Singh also sent Jat army in support of Jai Singh under the leadership of his second son Pratap Singh. There was a fierce battle on 24 December 1737 in which Nizam-ul-mulk was badly surrounded. At last on 6 January 1738 Peshwa Bajirao was forced to make a treaty with Jai Singh at village Doraha near Bhopal.

On 7 May 1741 when Jai Singh was busy in negotiations with Peshwa Balaji Bajirao in Dholpur, he received information about Bakht Singh Rathore's planning of attack on Amber. Jai Singh returned with an army of 50000 people. This army included Jats also. There was encounter by Bakht Singh with the army of Jai Singh at place called Gangwana near Ajmer. This battle was fought on 27 May 1741. Jat army took part in this battle under the leadership of Suraj Mal. Bakht Singh was defeated.

Badan Singh had 20 sons. Out of them Suraj Mal and Pratap Singh were competent and popular. To avoid any family feud in future Badan Singh got constructed separately strong forts and palaces at Kumher for Suraj Mal and at Weir for Pratap Singh. It is believed that due to his health conditions Badan Singh handed over the state of Weir to Pratap Singh around 1738-40 and declared Suraj Mal as successor for the rest of state and handed over the administration to him. Due to untimely death of his son Pratap Singh on 2 November 1745 and severity of his eye problem he decided to retire from active royal affairs. In November 1745 Suraj Mal became the ruler of Jat state.

Badan Singh spent the last period of his life in Deeg and Sahar. He had inclination for art and architecture since beginning. Natwar Singh has mentioned that Badan Singh had extraordinary sense of beautification even though he was illiterate. According to him the grand layout of palaces and gardens of Deeg was entirely that of Badan Singh.

Badan Singh did the beautification of Deeg Fort. The palaces constructed by him at Deeg are known as 'Purana Mahal'. He got constructed Parkotas around Kumher and Weir towns along with new construction of buildings in forts. Sahar was his place of choice so he got constructed beautiful buildings and developed gardens there. He also got constructed a temple at 'Dhir Samir' ghat of Vrindavan.

Badan Singh himself was a poet and encouraged poets. He brought famous poet Somnath from Mathura and appointed as teacher of Suraj Mal.

The craftsman of Agra had become jobless due to the meager financial conditions of Mughal ruler. Badan Singh brought these craftsman from Agra and gave them work. He also engaged large number of people in works like digging of ponds, making bricks, developing grass lawns etc. There was nobody without work in his state. Badan Singh died on 7 June 1756 at Deeg.

Badan Singh was the formal founder of the princely state of Bharatpur. Badan Singh expanded his state through vision and political tacts. He believed in piece rather than war and bloodshed. The people in his state were safe. He has great contributions for the architecture, art, poetry and craftmenship.