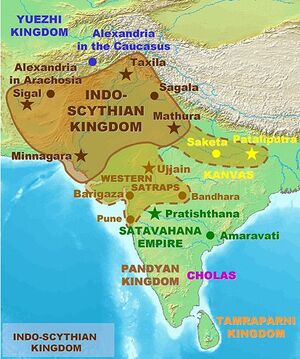 Kshaharatas (क्षहरात) (35–405 CE) were Indo-Scythian (Saka) rulers of the western and central part of India (Saurashtra and Malwa: modern Gujarat, Maharashtra, Rajasthan and Madhya Pradesh states). The Western Satraps were contemporaneous with the Kushans who ruled the northern part of the Indian subcontinent and were possibly their overlords, and the Satavahana (Andhra) who ruled in Central India. The power of the Saka rulers started to decline in the 2nd century CE after the Saka rulers were defeated by the south Indian Emperor Gautamiputra Satakarni of the Satavahana dynasty.[1] Later the Saka kingdom was completely destroyed by Chandragupta II of the Gupta Empire in the 4th century CE.[2]

The Western Satraps are thought to have started with the rather short-lived Kshaharata dynasty (also called Chaharada, Khaharata or Khakharata depending on sources).[3] The term Kshaharata is also known from the 6 CE Taxila copper plate inscription, in which it qualifies the Indo-Scythian ruler Liaka Kusulaka. The Nasikinscription of the 19th year of Sri Pulamavi also mentions the [[Khakharatavasa], or Kshaharata race.[4]

The earliest Kshaharata for whom there is evidence is Abhiraka, whose rare coins are known. He was succeeded by Bhumaka, father of Nahapana, who only used on his coins the title of Satrap, and not that of Raja or Raño (king). Bhumaka was the father of the great ruler Nahapana, according to one of the latter's coins. His coins bear Buddhist symbols, such as the eight-spoked wheel (dharmachakra), or the lion seated on a capital, a representation of a pillar of Ashoka.

Nahapana succeeded him, and became a very powerful ruler. He occupied portions of the Satavahana empire in western and central India. Nahapana held sway over Malwa, Southern Gujarat, and Northern Konkan, from Bharuch to Sopara and the Nasik and Poona districts. His son-in-law, the Saka Ushavadata (married to his daughter Dakshamitra), is known from inscriptions in Nasik and Karle and Junnar (Manmodi caves, inscription of the year 46) to have been viceroy of Nahapana, ruling over the southern part of his territory.[5]

Nahapana established the silver coinage of the Kshatrapas.

Circa 120 CE, the Western Satraps are known to have allied with the Uttamabhadras in order to repulse an attack by the Malavas, whom they finally crushed.[6] The claim appears in an inscription at the Nashik Caves, made by the Nahapana's viceroy Ushavadata:

...And by order of the lord I went to release the chief of the Uttamabhadras, who had been besieged for the rainy season by the Malayas, and those Malayas fled at the mere roar (of my approaching) as it were, and were all made prisoners of the Uttamabhadra warriors. — Inscription in Cave No.10 of the Nashik Caves.[7]

The Journal of Royal Asiatic Society, 1912 [8] mentions....[p.120]: Under the supervision of Pandit Radha Krishna some trial excavations were carried out on various ancient sites round Mathura out of funds provided by the Government of India. These sites include 1. Mora, 2. Ganeshra, and 3. Jaisinghpura.

[p.121]: The second site examined was that of Ganeshra, a village situated some three miles west of Mathura city, to the north of, the road to Govardhan. It was here that Dr. Fuhrer discovered a very fine Bodhisattva statue, now preserved in the Lucknow Museum1, This statue, I may remark in passing, is especially interesting on account of its evident relationship to the Bodhisattva type of Gandhara.

The site of Ganeshra comprises three distinct mounds. The mound nearest the village yielded numerous red sandstone fragments, which must have belonged to a small-sized railing. One of these fragments bears an incomplete inscription in one line which I read Bhagavaprasādā. The character is Brahmi of the third or second century B.C.

Another incomplete inscription in two lines on a rounded piece of red sandstone (Pl II, Fig. 2) found in the second Ganeshra mound reads as follows

Notwithstanding its very fragmentary state this short record is of interest for two reasons. First of all there can be little doubt that it records the constitution of a stūpa (Prakrit thūpa). The word following thupa may be safely restored as patiṭhāpita (पतिठापित) (Sanskrit pratishṭhāpitah प्रतिष्ठापित:). We may add that the monument in question was in all probability Buddhist. A stone parasol which was found lying at the foot of the mound, and which had previously been taken to the Museum, perhaps once surmounted the referred to in the inscription.

The second point of interest is the word Kshaharāta (क्षहरात), which occurs in the first line. This term is well known from some of the Western Cave inscriptions which mention the Kshaharata king and Satrap Nahapana. The Kshaharata clan, according to Mr. V. A. Smith,

[p.122]: probably a branch of the Sakas, held sway in Western India in the end of the first and in the beginning of the second century of our era. It is of some interest to find a Kshaharata mentioned here in an inscription from Mathura. Unfortunately the epigraph is too fragmentary to allow our drawing any certain conclusions from it.

It may, however, be assumed that the word immediately preceding Kshaharatasa was Kshatrapasa, if we may judge from what remains of the missing letters.

The syllable ye preceding the word thupa would seem to indicate that the stupa was not founded by the Kshaharata satrap Ghaṭāka himself, but by one of his female relations. The name of Ghaṭāka does not seem to occur on coins or in any other epigraphical documents. The character of the inscription agrees closely with the Brahmi used in the records of the reign of Kanishka; it may even be earlier.

The same mound produced twenty-four inscribed bricks and brickbats. Two of them are complete (13-1/2 by 10-1/4 by 3 inches), and contain the following legend: Rōhadevasa Kōhaḍa(sa) (PI. II, Fig. 3). Portions of the same word, sometimes in reversed order, occur on several of the brickbats. On some of the broken bricks we find the name Gōmita (Sanskrit Gōmitra) or the compound Gōmitāmacha (Sanskrit Gōmitrāmātya), usually in the instrumental case, the word kāritam following (Pl II, Fig. 4). In one case we have Gōmitasa amach[ena], and in another . . . chena Kohaḍe[na], which I propose to complete as Gomitādmachena Kohadena kāritam. We may infer that Rohadeva Kohaḍa ( = Kohala ?) was the minister (amātya) of Gōmita or Gōmitra, and, as it follows that the latter was in all probability a local ruler, it is very tempting to identify him with the Gomita or Gomitra whose coins have been found at Mathura.1 The date of

[p.123]: the inscribed bricks must be the third or second century BC.

Bhim Singh Dahiya[10] writes.... It is important to note that deliberate and systematic efforts were made to assimilate the Jats into Brahmanical fold on their arrival in India as conquerors. The famous Vrata Stomas were specifically prescribed for Indianisation of the foreigner Sakas. As mentioned by Agarwala these Stomas were very easy to perform and seem to be a mere formality, so that the foreigners who became overlords of the country may be Hinduised under priestly power. A further process in the same direction was taken by deliberate

[p.74]: attempts at Sanskritisation of their clan name. It was under these processes that the Solgis were called Suliks/Saulikas in the Puranas, etc. The clan name Pawar was similarly changed into Parmar but the most important clan which was thus changed was the Sahrawat. The process under which the Persian title "Satrap" was Sanskritised into "Ksatrapa," was applied to Sahrawat also and this important clan of the Jats was written as Ksaharat (क्षहरात). The well known western Satraps of Saurastra, Kathiawar, Gujrat, Ujjain, Mathura, etc. belonged to this clan. The great Satraps, Chaṣṭan and Rudradaman belonged to the Sahrawat clan of the Jats. Mr Bansi Lal, former Defence Minister of India belongs to this clan. 208. It is well known to the historians that this clan of the Jats was ruling western central India for about 500 years and it was another Jat clan, namely, Dharan, misnamed as Guptas, who under Chandragupta II, Vikramaditya, incorporated these states under central rule.

Kśaharāt : The first letter in both the words Satrap and Saharavat is 'S' and when these words became common in India, both these words were Sanskritised by changing the initial 'S' into 'Ksa' (ar). Therefore the clan name was written as Kśaharāta. But it is a matter of gratification that the Jats have retained almost all their clan names in their original form, and Saharavat is still written and spoken as such. The suffix, wat, is only partly Indianised and it may be original also. We find that another Jat clan is called Gurlet in Central Asia, whereas it is called Gurlawat in India. The Kśaharāt and Sahrawat difference can be explained on this analogy. It is worth noting that E.J. Rapson while mentioning the coins of Satrap Bhumaka, writes both these words with an initial 'Ch' in Kharoshhi script and with an initial 'Ksa' in the Brahmi script.209 A reference to Sten Konow's article will be illuminating. First of all, Konow mentions that the Kusanas were in reality Sakas. While stating this Konow seems to have been dragged into the unnecessary controversy about the difference between the Sakas, Kushanas, Yue-che, etc.210 This controversy is quite futile and needless. There was no difference between

208a. On further enquiry, it is learnt that the clan of Mr Bansi Lal is, not Sahrawat, but Legha (cf James Legge, author of "A Record of Buddhist Kingdoms by Fa-hien" Oxford, 1886)

Back to General History