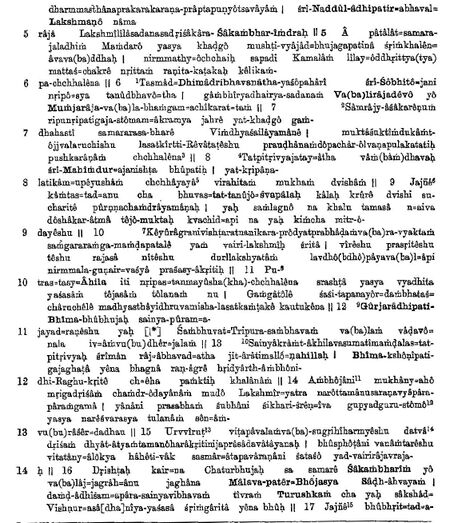 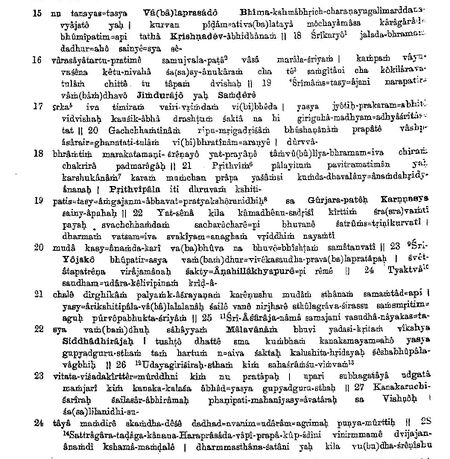 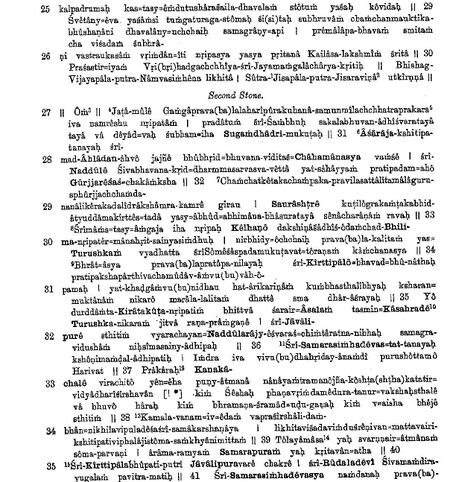 [Page-70] This inscription is on two stones which -were found on the Sunda Hill, about 10 miles north of Jashwantpura in the Jaswantapura district of the Jodhpur State of Rajasthan. I edit it from rubbings, kindly placed at my disposal by Mr. Gaurishankar Hirachand Ojha.

The first stone contains 26 lines of writing -which covers a space of 3' 3" broad by 1' 7-1/2" high, the second 24 lines which cover a space of 2' 10" broad by 1' 5" high. The inscription was carefully written by Nāmvasimha, a son of the physician Vijayapala, and well engraved by Jisaravi, a son of the sutradhāra Jisapala, and is in a state of perfect preservation. The characters are Nagari, and the language is Sanskrit. Excepting two prose passages at the bottom of either stone which record the names of the author, the writer and the engraver, the date samvat 1319 in line 48, and another prose passage, numbered as a verse, in lines 35 and 36, the text is in verse, the total number of verses (including, the prose passage counted as a verse) being 59. As regards orthography, the sign for v denotes both v and b. The language is generally correct and plain, but there are one or two passages about the exact meaning of which I am still doubtful. I especially do not understand verse 12, which seems to allude to some legend unknown to me, in which the creator weighs the sun and the moon, apparently using the Ganges as a balance.

Moreover, I am not sure about the meanings of the word Shrikari (Kari ?), which occurs in verses 19 and 59, and gupyadguru in verses 15, 26, and 27. To judge from the context in verse 59 (Shrikari-sapta kavādi-), the former 9 may denote some kind of musical instrument and as a gupyadguru must be

Page-71 - something on which a golden kumbha and a golden kalasa can be placed, the word perhaps denotes a temple generally or a particular temple. Of rare words or words employed in an unusual way we may note keli, 'the earth,' in verse 6, bhusphoṭa, ' a mushroom,' in verse 16, the feminine yugali, 'a pair,' in verse 18, and tāmbuliya, ' an areca-nut,' in verse 21 ; bandhu and bandhava denote ' a brother' in verses 24, 26, and 20 ; and a cousin is described as pitrivyajatayā bandhava, i.e. ' a brother in consequence of being born from a paternal uncle,' in verse 9.

The inscription in the prose passage at the bottom of the first stone and in verse 59 is styled a prshasti. It was composed by the (Jaina) suri Jayamangala (Jayamangalacharya), who belonged to the Brihad-gachchha and was a disciple of Ramachandra, himself a disciple of Devacharya.

And its primary object is to glorify the Chahamana chief Chachiigadeva, during whose reign it was composed, and for whom it furnishes a date in the month of Vaisakha of the [Vikrama] year 1310, falling in about A.D. 1262. Fortunately, the author has used the occasion to give a eulogistic account of the Chahamanas of Naddula generally, which is of considerable interest.

Verses 1-3 pray the moon on Sambhu's (i.e. Siva's) forehead and (Siva's consort) Parvati or Chandika to grant continuous good fortune and happiness. Verse 4 -then records that formerly there was the hero Chahamana, a source of joy to the great Rishi Vatsa. In his lineage there were :

[Page-73] town of Jalor in the same State. A place named Kasahrada has been identified by the late Prof. Buhler with Kasandra or Kasandhra, a village with about 400 inhabitants on the road from Dholka to Palitana,in Long. 72-11', Lat. 22- 19'; but the Kasahrada of this inscription may be a different place nearer Nadol. According to verse 41 Kirtipala's daughter Rudaladevi built two temples of Siva at Javalipura.

[Page-74] would therefore have been the own brother-in-law of Chachigadeva. The following verses treat of the same chief's works of piety. At Srimāla he remitted certain taxes, and at Ramasainya he granted funds for the worship of (the god) Vigrahaditya, and placed a golden cupola (kumbha) and a flag-staff (dhvaja) on the temple of (the god) Aparajitesa to whom at the same time he gave a silver girdle (mekhalā). For the same temple he provided a hall (shāla) with a car (ratha) richly decked with precious stones. Chachigadeva visited the Sugandhadri, worshipped there the goddess Chamunda, known by the name Aghaṭesvari, and at her temple established a mandapa which was consecrated by the Brāhmans on the akshaya-tritiyā of the month Vaisakha of the [Vikrama] year 1319.

I have already stated that the inscription thus for the reign of Chachigadeva yields a date in about A.D. 1262. Two other dates, of She [Vikrama] years 1333 and 1334, falling in about A.D. 1276 and 1277, are furnished for him by the two Bhinmal inscriptions Nos. 702 and 703 of my Northern List, where he is described as the Maharājakula Chachiga or Chachigadeva.

I may add that Chachigadeva is mentioned, under the name Chacha, in line 8 of the Jodhpur inscription of Rupadevi, published by me above, VoL IV. p. 312 ff. In my text of that inscription I have given the name as Chāva, and a renewed examination of the impressions enables me to affirm that either this is the actual reading, or that at any rate the name would be so read in the impressions by any one not acquainted with what we have learnt now from the Sundha Hill inscription. Knowing what I do now, I have no doubt that the intended reading IB Chacha. This Chacha is called a Chahamana in Bupadevi's inscription and described as the son of Udayasimha and grandson of Samarasimha, which exactly fits our Chachigadeva. The inscription supplies the additional information that Chacha's wife was Lakshmidevi, and that this lady bore to him Rupadevi, who became the wife of a king Tejasimha (to whom she bore a son named Kshetrasimha) and founded a well or tank in A.D. 1284, in the reign of the Maharājakula Samyantasimhadeva.

[Page-80] Then there came Lakshmana, who by his irresistible valour acquired part of the earth.' In the mutilated verse 12, which together -with verse 11 treats of this chief, the word Naddula is distinctly legible, as well as Shakambhari; and it is certain that Lakshmana is described in the verse as king of Naddula, and highly probable that he is spoken of as Shakambharimāṇikya, 'the jewel of Sakambhari.' After him, verse 13 mentions 'his son' Baliraja, and Baliraja's ' son,' whose name I read as Sohi, regarding this to be another form of the name Sohiya (Sobhita, Shobhita,) of the preceding inscriptions. According to the latter, Sohiya was Lakshmana's son, and his son again -was Baliraja ; the author of the present inscription has erroneously transposed the two names. Verses 14-18 then enumerate Mahindu, Jinduraja, Asarja, Alhana, Kirtipala and Samarasimha. From what we know already from the other inscriptions, this is the line, from father to son, of the Chahamanas of Naddula from Mahindu to Samarasimha, except that, between Mahindu and Jinduraja, Anahilla, the son of the former and father of the latter, has been omitted. So far our inscription tells us nothing of importance that is new.

Samarasimha, according to verse 19, had two sons, of whom the one called Udayasimha, who also is already known to us from bhe inscription C., succeeded him in the government, Udayasimha's elder brother was Mānavasimha (v. 20) ; his son was Pratāpa (v. 21), and his son Vijaḍa, also named Daśasyandana (v. 22). This chief married Nāmalladevi (v. 23), who bore to him four sons Lāvanyakarna, Lundha, Lakshmana, and Luṇavarman (v. 24), of whom the eldest became the ruling chief. When Lavanyakarna died, he was succeeded by the next brother, whose name in verse 26 ia clearly Luṇtigadeva, in verse 28 Luntiga, in verse 30 Luṇḍāgara, and in the prose passage in line 29 Lunṭagara. Luntiga conquered and ruled all countries, particularly Chandravati and the divine territory of Arbuda (Arbuda-divya-desam, v. 27). On the mountain Arbuda he set up images of himself and his queen, and carried out repairs at the temple of Achaleshvara. As a grant to the temple, he moreover gave the village of Heṭhñji fl (v. 33) for the perpetual worship of the god.

From the prose passage which follows, and which is more or less illegible, we learn that in the year 1377, on Monday, the 8th of the bright half of Vaisakha, in, the Kshaya-Samvatsara, Luntiga, described as the Mahārājakula, the glorious Luntagara, resided at [Vu ?]huṇḍha which belonged to Chandravati. This date regularly corresponds, for the expired Kārttikādi

Of the localities mentioned, in addition to the well-known Arbuda or Mount Abu, Chandravati according to the Rajputana Gazetteer, Vol. HE. p. 126, is a large place (now in ruins) on the Banas river near the south-east border of the Sirohi State. There can be no doubt that it was taken by Luntiga from -the Paramaras. Hethunji is the small village of Hetamji on Mount Abu. Vuhundha (?) if this is really the name I am unable to identify.

On Mount Abu there are at least two other inscriptions, of no great extent and partly illegible, of the reign of Luntigadeva, described as the Mahārjākula, the glorious Lundhaka Lundha(?). One is dated on Wednesday, the 8th of the dark half of chaitra in the (Vikrama] year 1372, corresponding, so far as I can see, to Wednesday, the 17th. March A.D, 1316 ; the other on some specified day, which I cannot make out with certainty, in the [Vikrama] year 1373. And there is a third, partly effaced inscription, which also mentions the Mahārājakula, the glorious Lundhaka or Lundhaka, and speaks of the glorious Nāmaladevi, who clearly is the Namalladevi of the present inscription, the mother of Luntigadeva, I am not at present prepared to give a fuller account of these three inscriptions.

But I may add here that another account of some of the later Chahamanas is found in an inscription, which is on a stone at a temple the Vimala-vasahikā, ordinarily but wrongly called Vimala Sah's or Shah's temple which was founded on Mount Abu, according to the inscription itself in the Vikrama year 1088, by a certain Vimala, ' an ornament of the Pragvata race,' after he had been appointed dandapati at Arbuda by the (Chaulukya) king Bhimadeva (I.). This inscription in lines 9-15 (verses 14-22) gives the following rājdvali :

There was a hero, Asaraja by name, a moon to the lotus-flower the Chahuvāma family, who was king of the town of Nadulla (v, 14). Then there came Samarasimaha ; and his son was Mahanasimhabhata (v. 15). Then came Pratapamalla ; and of him was born Viada, who ruled the Marusthali-mandala (v. 16). He had three sons, the first of whom was the king Luniga (v. 17). After him the text mentions Lundha (v. 18) and Lumbha (v, 19), without distinctly saying that they were his younger brothers; It then records the conquest Of Arbuda (v. 20) ; says further that Luniga's son was Tejasimha (v. 21) ; and after him eulogizes Tihuṇaka, to whom it wishes long life (v. 22).

The mutilated verse 23 appears to say that the glorious Lumbhaka, together with Tejasimha and Tihuna, in right manner carried on the government of the mountain Arbuda;