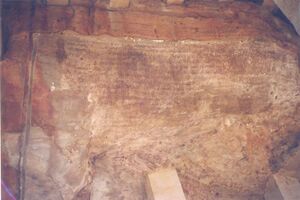 Udayagiri and Khandagiri Caves are partly natural and partly artificial caves of archaeological, historical and religious importance near the city of Bhubaneswar in Odisha, India. The caves are situated on two adjacent hills, Udayagiri and Khandagiri, mentioned as Kumari Parvat in the Hathigumpha inscription. They have a number of finely and ornately carved caves. It is believed that most of these caves were carved out as residential blocks for Jain monks during the reign of King Kharavela. Udayagiri means "Sunrise Hill" and has 18 caves while Khandagiri has 15 caves.

The caves of Udayagiri and Khandagiri, called lena or leṇa in the inscriptions, were dug out mostly during the reign of Kharavela for the abode of Jaina ascetics. The most important of this group is Ranigumpha in Udayagiri which is a double storeyed monastery.

Number of the caves

B.M. Barua, based on a reading of line 14 of the Hathigumpha inscription, declared that a total of 117 caves were excavated by Kharavela and others on the Kumari hill (Udayagiri). Marshall has counted more than 35 caves in both the hills, while M.M. Ganguli has enumerated only 27 caves.

The number of existing caves at Udayagiri is 18, while Khandagiri has 15.[1] The local names of the existing caves are listed below, numbered according to the enumeration of the Archaeological Survey of India.

In Udayagiri, Hathigumpha (cave 14) and Ganeshagumpha (cave 10) are especially well known due to art treasures of their sculptures and reliefs as well as due to their historical importance. Rani ka Naur (Queen's Palace cave, cave 1) is also an extensively carved cave and elaborately embellished with sculptural friezes. Khandagiri offers a fine view back over Bhubaneswar from its summit. The Ananta cave (cave 3) depicts carved figures of women, elephants, athletes, and geese carrying flowers.

Hathigumpha inscription consists of seventeen lines incised in deep cut Brahmi letters of the 1st Century BC on the overhanging brow of a natural cavern called Hathigumpha in the southern side of the Udayagiri hill near Bhubaneswar in Orissa. It faces straight towards the rock Edicts of Asoka at Dhauli situated at a distance of about six miles.

Besides Hathigumpha inscription of Kharavela there are some other minor Brahmi inscriptions in the twin hillocks of Udayagiri and Khandagiri, which were deciphered earlier by Prof R D Banergy during 1915-16 (Epigraphic Indica-XIII) and BM Baraua (Indian Historical Quarterly-XIV). Sadananda Agrawal has given further clarifications about them. Those seem to be related with Jats are as under:

This inscription is engraved on the raised space between the second and third doorways of the cave.

Translation - By the blessings of Arhats the chief queen of Kharavela, the Cakravarti monarch of Kalinga, the great grand-daughter of Hathisiha (Hasti Simha) and the daughter of Lalāka or Lalārka caused to be excavated the cave for the sramanas of Kalinga.

This inscription is incised on a raised bend between the 3rd and 4th doorways from the left and contains single line.

Kudepasiri seems to be the immediate successor of Kharavela.

This inscription has been engraved on the right wall of Veranda, to the right of the entrance to the right-hand side chamber of the main wing, consisting of one line. The text is presented below:

Translation - [This is] the cave of Prince Vaḍukha.

Note:- On palaeographic ground Prof Banergy considers this inscription to be a little earlier than the inscription of king Kudepasiri. According to Sadananda Agrawal, Prince Badukha stands an obscure figure in history, but Badukha seems to be the son or brother of Kudepasiri.

This inscription consisting of one line, is incised over the doorway of the sarpagumpha.

Translation - The chamber and veranda/or side chamber of cūlakama. However Dr. Sahu interpreted Ajeya being united by a Sandhi qualifying Koṭha there by denoting invincible. but he ignored the conjunction ca which follows Koṭha and Jeya.

V-Inscription in the sarpagumpha ( to the left of the doorway)

Translation :- [The pavilion is the] gift of Kamma and Halakhina. Most probably Halakhiṇa was the wife of Kamma. Chūlakamma- found in the inscription No. IV and Kamma of this record indicate official designations rather than the proper names. Kamma may be taken as minister of works (Karma saciva) and Cūlakamma appears to be a junior cadre of minister in the Department of works.

This inscription contains one line has been incised over one of the three entrances to the main chamber of the cave from the veranda.

Translation :- The chamber and veranda (or side chamber) are the gift of cūlakama.

The record is incised on the outer wall of the inner chamber.

Translation :- The cave of Bhūti, the city judge.

This inscription has been engraved over the entrances to the inner chamber of the cave.

IX.— Inscription in the Chota Hathigumplia.

This inscription does not seem to have been noticed before in priut. It seems to have been noticed for the first time by Mr. A. E. Caddy, when he was taking casts of these inscriptions for the Calcutta Museum, as there ia a good cast of it in that institutíon, The record consists of a single line, very mnch mutilated, on the outer face of the tympanum of the arch over the dowrway.

The record of this inscription is incised over one of the entrances to the inner chamber. The Text reads in Sanscrit as

Translation: The cave of Kusuma, the padamulika.

Notes:- There is a syllable after the word lenam, which may be read as ni or phi,. padamulika literaly means, one who serves at the feet [of king].

Here Kusuma seems to be related with Kaswan clan of Jats.

The record is incised on the architrave between the left ante and the fifth pillar.

According to Kishori Lal Faujdar, An article about Raja Kharavela in Orissa mentions about the rule of Kaswan in 2nd century of Vikram samvat. It has been mentioned in ‘Hathi Gumpha and three other inscriptions’ (page 24) in Devanagari as under:

This translates that the city of 'Masik' was obtained with the help of 'Kuswa' Kshatriyas. 'Masika' has been identified with Asikanagara

Alexander Cunningham[2] writes that The kingdom of U-cha. or Oda, corresponds exactly with the modern province of Odra, or Orissa. By a reference to the ' Biography of Hiouen Thsang,'[3] it would appear that the capital of Odra was 700 li to the south-west of Tamralipti, and as this bearing and distance agree with the position of Jajipura, I think that the pilgrim must have returned to Tamluk from Kirana Suvarna before proceeding to Odra. In the travels of the pilgrim[4] the bearing and distance are taken from Kirana Suvarna; but this is perhaps a mistake, as they are usually referred to the capital, which, whether we place it at Jajipur or at Katak, is due south of Kirana Suvarna.

The ancient metropolis of the country was Katak on the Mahanadi river, but in the early part of the sixth century Raja Jajati Kesari established a new capital at Jajatipura on the Vaitarani river, which still exists under the abbreviated name of Jajipura. The same king also began some of the great temples at Bhuvaneswara ; but the city of that name was founded by Lalitendra Kesari. The language and pronunciation of the people is said to have differed from those of central India, which is still true at the present day.

To the south-west there were two hills, on one of which, called Pushpagiri, or the "hill of flowers," there was a monastery of the same name and a stupa of stone, and on the other to the north-west only a stupa. These hills I take to be the famous Udayagiri and Khandagiri, in which many Buddhist caves and inscriptions have been discovered. These hills are situated 20 miles to the south of Katak and 5 miles to the west of the grand group of temples at Bhuvaneswara. The stupas were said to have been built by demons ; from which I infer that the origin of the great caves, and other Buddhist works on these hills was quite unknown at the period of Hwen Thsang's visit.