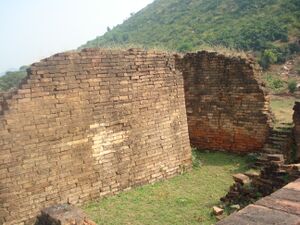 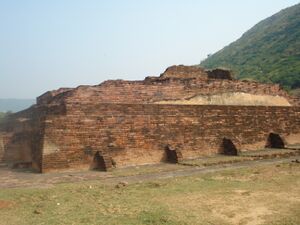 Jarasandha (जरासंध) was a great and powerful Chandravanshi king of Magadha. He was the son of a vedic king named Brihadratha. He was also a great devotee of Lord Shiva. He enmity with the Yadava clan in the Mahābhārata. There is a famous Jarasandha's Akhara at Rajgir where martial arts were practiced by Jarasandha. 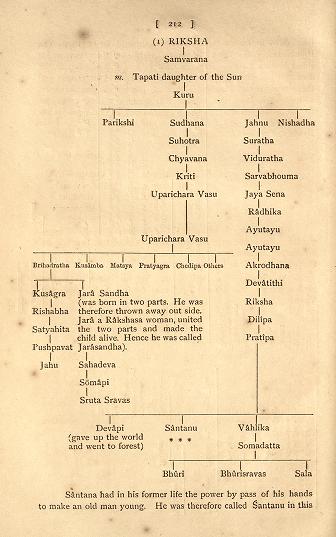 Ancestry of Jarasandha as per Bhagavata Purana

According to James Todd[2]Kuru had two sons, Sudhanush and Parikshita. The descendants of the former terminated with Jarasandha, whose capital was Rajagriha on the Ganges, in the province of Bihar. Rajgir is in Patna District.

Ancestry of Jarasandha as per Bhagavata Purana is as under:

James Todd[3] writes that Jarasandha was the monarch of Rajagriha,3 or Bihar, whose son Sahadeva, and grandson Marjari, are declared to have been contemporaries of the Mahabharata, and consequently coeval with Parikshita, the Delhi sovereign.

The direct line of Jarasandha terminates in twenty-three descents with Ripunjaya, who was slain, and his throne assumed by his minister, Sanaka, whose dynasty terminated in the fifth generation with Nandivardandhana. Sanaka derived no personal advantage from his usurpation, as he immediately placed his son, Pradyota, on the throne. To these five princes one hundred and thirty-eight years are assigned.

Rajatarangini[4] tells us that the history of Kashmir then presents a blank till the reign of Gonanda I at the beginning of the Kaliyuga. This powerful king was contemporary with Yudhisthira and a friend of his enemy Jarasandha. Gonanda I, who ruled in Kashmira, where the Ganges flows cheering the mount Kailasa on her way, was invited by Jarasindhu to help him in his invasion of Mathura, the capital of Krishna. With a large army they invested that city and encamped on the banks of the Yamuna to the great terror of their foes. On one occasion the army of Krishna was defeated in a battle, but Balarama not only retrieved the confusion of his army, but made a vigorous attack on the allied force. For a long time victory remained doubtful, till at last Gonanda I, pierced with wounds fell dead on the field, and the army of Krishna was victorious.

Brihadratha was the king of Magadha. His wives were the twin princesses of Kashi. While he led a content life and was a famed king, he was unable to have children for a very long time. Frustrated over his inability to have children, he retreated to the forest and eventually ended up serving a rishi named Chandakaushika. The rishi took pity on him and on finding the actual cause for his sorrow, gave him a fruit and told him to give it to his wife who in turn will sooner become pregnant. But the sage did not know that he had two wives. Not wishing to displease either wife, Brihadratha cut the fruit in half and gave it to both of them. Soon both the wives became pregnant and gave birth to two halves of a human body. These two lifeless halves were very horrifying to view. So, Brihadratha ordered these to be thrown in the forest. A witch / man-eating demoness (Rakshasi) named "Jara" (or Barmata) found these two pieces and held each of these in her two palms. Incidentally when she brought both of her palms together,the two pieces joined together giving rise to a living child. The Child cried loudly which created panic for Jara. Not having an heart to eat a living child, the demoness gave it to the king and explained him all that happened. The father named the boy as Jarasandha (meaning the two pieces were brought together by Jara)

Chandakaushika arrived at the court and saw the child. He prophesied to Brihadratha that his son will be specially gifted and would be a great devotee of Lord Shiva.

Jarasandha became a famed and powerful king, extending his empire far and wide. He prevailed over many kings, and was crowned emperor of Magadha. Even while Jarasandh's power continued to grow, he had concerns over his future & that of the empires, as he had no heirs. Therefore, on the advise of his close friend king Banasura, Jarasandh decided to get his two daughters 'Asti and Prapti' married to the Crown-Prince of Mathura, Kansa. Jarasandha had also lent his army and his personal advise to Kansa to create a coup in Mathura.

When Krishna killed Kansa in Mathura, Jarasandha become enraged because of Krishna and the entire Yadavas clan on seeing his two daughters being widowed. So, Jarasandha attacked Mathura repeatedly. He attacked Mathura 17 times with an army bigger than the last. But he was defeated by Krishna and Balaram every single time. Sensing danger over the repeated attack on Mathura by Jarasandha, Krishna relocated his capital city to Dwaraka. Dwaraka was an island and it was not possible for anyone to attack it at all. Hence, Jarasandha could not attack the Yadavas anymore.

Tribes fled out of fear of Jarasandha

Kshatriyas in support of Jarasandha: Jarasandha, enjoying the sovereignty over the middle portion of the earth (Mathura), resolved to create a disunion amongst Kings. Sisupala, placed himself under his protection and became the generalissimo of his forces. Vaka, the king of the Karushas, Hansa and Dimvaka, Dantavakra, Karusha, Karava, Meghavahana, Yavanas, Muru and Naraka, Varuna, who is called Bhagadatta, Purujit, Chedis, Vanga, Pundra, Paundraka, Vasudeva espoused the side of Jarasandha.

Yudhisthira was planning to make a Rajasuya yagna or Ashwameda Yagna in order to become an emperor. On the advise of Krishna he learnt that Jarasandha is the only obstacle who will oppose Yudhisthira from becoming an emperor. On the other hand, Jarasandha who got defeated from Krishna and Balarama repeatedly on 17 earlier occasions, imprisoned 95 kings so far. He was in need of 5 more kings, after which Jarasandha could perform an Yagna to Lord Shiva. If he sacrificed these 100 kings in this yagna, then Jarasandha would become invincible by the grace of lord Shiva. So, Jarasandha was planning to make one last attack on Dwaraka after this Yagna. This would in turn make Jarasandha an emperor.

Thus, Krishna advised Yudhisthira that Jarasandha must be killed before Yudhisthira starts performing the Rajasuya yagna. Krishna further stated that it was not possible for Yudhisthira to defeat Jarasandha in a war as he had a boon of not being killed through any weapons. To find a way out, Krishna suggested to wage a Mallayudda (one on one battle / wrestling) with Jarasandha. So, Krishna, Bhima and Arjuna disguised as Brahmins and went to the capital of Jarasandha.

Like Karna, Jarasandha was also very good in giving charity donations. After performing his Shiva pooja, he used to give whatever the Brahmins asked for. On one such occasion Krishna, Arjuna and Bheema in the guise of Brahmins met Jarasandha. Krishna asked Jarasandha to choose any one of them for a Mallayudda. Jarasandha choose Bheema to wrestle. Both of them fought for 27 days. Bheema did not know how to defeat Jarasandha. So, he sought the help of Krishna. Krishna knew the secret by which Jarasandha could be killed. Since, Jarasandha was brought to life when the two lifeless halves joined together, conversely, he can be killed only when these his body was torn into two halves and find a way as how these two don't merge. Krishna took a stick, he broke it into two and threw them in both directions. Bheema got the hint. He tore Jarasandha's body into two and threw the pieces in two directions. But, these two pieces came together and Jarasandha was able to battle Bheema again. Bheema got tired after several such futile attempts. He again sought the help of Krishna. This time, Lord Krishna took a stick, broke it into two and threw the left piece on right side and the right piece on the left side. Bheema followed precisely the same. Now, he tore Jarasandha's body into two and threw them in opposite directions. Thus, Jarasandha was killed as the two pieces could not merge into one.

After his death, the Pandavas released all the 95 kings who were imprisoned by Jarasandha and made the Son of Jarasandha (Sahdeva) as the king of Magadha. Thus, these 95 kings along with the Sahdeva ruler of Magadha became an ally of Pandavas who took part in the great Mahabharat war later.

A Dwandwa yudda refers to a one on one battle between two great warriors. This does not involve the destruction of an entire army. The Mallayudda (wrestling) between Bheema and Jarasandha lasts 27 days. Similarly, the dwandayuddha between Parasurama and Bhishma lasts for 30 days, while that between Krishna and Jambavan lasts for 28 days. Likewise, the Dwandwa Yudda between king Vaali (Sugreeva's brother) and a demon in the form of a Buffalow lasts for 45 days. Thus in those days, many of the Dwandwa yuddas fought between two great warriors lasted for more than a month. It was only after a month long battle, the battle concluded by some unique strategies adapted by one warrior in order to gain an upperhand over his opponent.