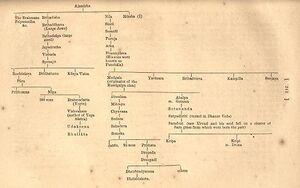 Ajamidha (अजमीढ़), was the perpetrator of the royal line of Bharatas. And he begat six sons,--

Ram Sarup Joon[3] writes that Vir Bhadra was the ruler of the area known as Shiv Ki Jata. He was of Puru Vansh and ancestor of seven Jat gotras. In the same dynasty, the Jat gotras Midh, Midhan, Mel and Ajmel claim their descent from Raja Hasti of Hastinapur. Therefore, the continuous chain of Jat rule is traced back to Raja Yudhishtra, ruler of Hastinapur and Indraprastha, later known as Delhi. The third ruling Jat dynasty in this line was Dhillon whose descendants are the present Jat gotras Dhillon, Dhilwal and Dhill.

Ram Swarup Joon[4] writes abou Mirh-Midharh-Ajmirh-Sahotas: King Hasti who founded Hastinapur had three son's -Ajmirh, Devmirh and Purmirh. According to the Mejmaul ul Tawarikh, in the age of Duryodhana these people had settled down in the basin of the Indus River and were called Jatt.

The Mirh Jats are found in large numbers in the Western Punjab in Pakistan. In ancient times the Mirhs migrated, to Arabia, Syria and Baluchistan. References to the Mirh tribe are found through out Asia.

The Nawab of Karnal belonged to Midhan gotra.

Madhian, Mandan, Mandh and Mandhal are derivatives of the same gotra. They are found in large numbers in the districts of Jhang, Multan, Dera Ghazikhan, Muzaffargarh, Mainwali, Shahpur and Jhelum.

The Madha gotra is also found among the Rajputs, and they have 20 villages near Delhi and some in district Moradabad.

Samrat Bharat was a chandravansi King of India. Raja Ajmidh/Ajamidha was born in sixth generation of Maharaja Bharata. India gets its name Bharat from Maharaja Bharat. Maharaja Bharat had three sons namely Rikshu, Kanva and Meed. The descendants of the youngest son Meed were known as Ajmidhia or Ajmeria.

According to James Todd[6] Hastin sent forth three grand branches, Ajamidha, Dvimidha, and Purumidha. Of the two last we lose sight altogether ; but Ajamidha's progeny spread over all the northern parts of India, in the Panjab and across the Indus. The period, probably one thousand six hundred years before Christ.

[p.50]: From Ajamidha[7] in the fourth generation, was Bajaswa, who obtained possessions towards the Indus, and whose five sons gave their name, Panchala, to the Panjab, or space watered by the five rivers. The capital founded by the younger brother, Kampila, was named Kampilnagara. Of this house was Draupadi, the wife, in common, of the five Pandava brothers : manners peculiar to Scythia.

The descendants of Ajamidha by his second "wife, Kesini, founded another kingdom and dynasty, celebrated in the heroic history of Northern India. This is the Kausika dynasty.