This page is for Dhar - A city.
For the Dhar Jat Gotra see → Dhar 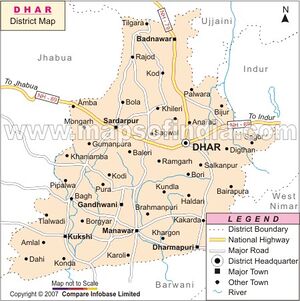 Dhar (धार) or the medieval historical town of Dhara Nagari is located in the Malwa region of western Madhya Pradesh. It is the administrative headquarters of Dhar District.

The town is located 33 miles west of Mhow, 908 ft. above sea level. It is picturesquely situated among lakes and trees surrounded by barren hills, and possesses, besides its old walls, many interesting buildings, both Hindu and Muslim, some of them containing records of a great historical importance. 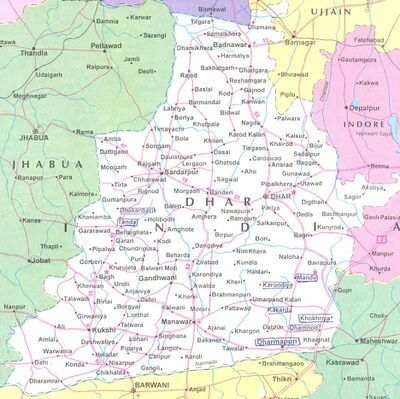 The Lat Masjid, or Pillar Mosque, was built by Dilawar Khan in 1405 out of the remains of Jain temples. It derives its name from an iron pillar, supposed to have been originally set up at the beginning of the 13th century in commemoration of a victory, and bearing a later inscription recording the seven days visit to the town of the emperor Akbar in 1598. The pillar, which was 43 ft. high, is now overthrown and broken. The Kamal Maula is an enclosure containing four tombs, the most notable being that of Shaikh Kamal Maulvi (Kamal-ud-din), a follower of the famous 13th-century Muslim saint Nizamuddin Auliya. The mosque known as Raja Bhoj's school was built out of Hindu remains in the 14th or 15th century: its name is derived from the slabs, covered with inscriptions giving rules of Sanskrit grammar, with which it is paved. On a small hill to the north of the town stands the fort, a conspicuous pile of red sandstone, said to have been built by Sultan Mohammed bin Tughluk of Delhi in the 14th century. It contained the palace of the raja. Of modern institutions may be mentioned the high school, public library, hospital, and the chapel, school and hospital of the Canadian Presbyterian mission. There was also a government opium depot for the payment of duty, the town having been a considerable centre for the trade in opium as well as in grain.

The town, the name of which is usually derived from Dhara Nagari (the city of sword blades), is of great antiquity, and was made the capital of the Paramara chiefs of Malwa by Vairisimha II, who transferred his headquarters hither from Ujjain at the close of the 9th century. During the rule of the Paramara dynasty, Dhar was famous throughout India as a centre of culture and learning, especially under king Bhoj (1010-1060). After suffering various vicissitudes, it was finally conquered by Ala ud din Khilji, Sultan of Delhi, in the 14th century. Dilawar Khan, who had been appointed governor in 1319, practically established his independence soon afterwards. The Lat Masjid is a monument built by him. While Dilawar Khan established his independence de facto, his son Hoshang Shah became the first de jure Muslim ruler of Malwa, with his capital at Mandu. Subsequently, in the time of Akbar, Dhar fell under the dominion of the Mughals, in whose hands it remained till 1730, when it was conquered by the Marathas.

In late 1723, Bajirao at the head of a large army and accompanied by his trusted lieutenants, Malharrao Holkar, Ranoji Scindia and Udaiji Rao Ponwar, swept through Malwa like a tornado. A few years earlier the Mughal Emperor had been forced to give the Marathas the right to collect chauth taxes in Malwa and Gujarat. This levy added much value to the Marathas, as both the king Shahu and his Peshwa, Bajirao, were ear-deep in debt. The revenues they collected from their own lands were not sufficient to run the administration of the state and finance their large military expenditure. The Marathas lived by the sword and trade was alien to them. Agriculture in the Deccan depended heavily on the timeliness and sufficiency of the monsoons. The most important source of money were therefore the chauth (a 25% tax on produce) and sardeshmukhi (a ten percent surcharge) exacted by the Marathas. Bajirao had also determined that “war must pay for war”, and was assiduous in enforce his right for chauth in Malwa. The Peshwa's armies defeated the Mughal governor and attacked the capital Ujjain. Bajirao established military outposts and imposed taxes on the country as far north as Bundelkhand.

The Paramara King Bhoja had constructed Mahakaleshwar temple between 1000-1050 AD. We also know from Udayaditya (1070-1080) prasasti at Udaipur as a Nagavanshi Inscription at Mahakal temple. Udayaditya was successor of Jayasimha. We know about nine Inscriptions of Udayaditya at Ujjain, Udaipur, Dhar, Un and Kamed. He was responsible for construction of Nilakantheshwara temple at Udaipur. His Gold coins have been located at Indore. [2]

The Udaipur Stone Inscription of Udayaditya (EI,I,22) states that he was the son of Gyāta, the grandson of Goṇḍala. In the Pathashala of Bhoja, there is an inscription of two verses in Nagabandha figure composed by Udayaditya. Similar verses are also found at Ujjain and Un. He was follower of Shaivism. He granted the village of Vilapadraka to the temple of Somanatha, which was situated in the fort of Koshavardhana i.e. the modern Shergarh (EI, XXIII, pp.131ff). [3]

The Punwars/Parmars of 12 villages in modern day Haryana claim proudly their descent from the king Bhoj (1010-1060). 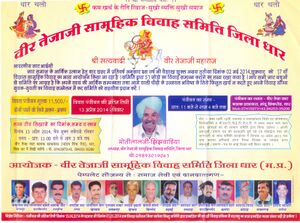 Dhar Gotra Jats are found in Amritsar district in Punjab. [5],[6]

According to 1911 census, the population of Dhar Muslim Jat Clan was 1,074 in Bahawalpur State.[7]