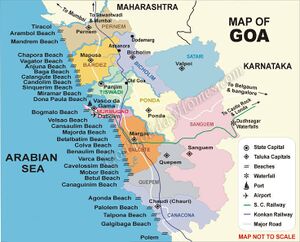 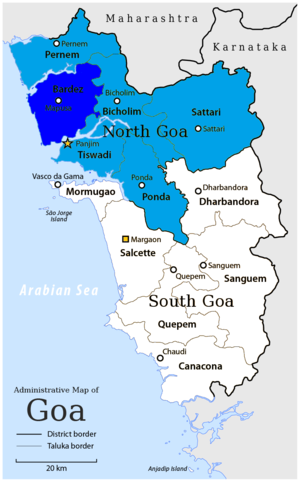 Goa (गोआ) is a state on the southwestern coast of India within the Konkan region. Panaji is the state's capital, while Vasco da Gama is its largest city. Author (Laxman Burdak) visited the place on 19.12.2007 - 21.12.2007 and has provided images and other information.

It is bounded by Maharashtra to the north and Karnataka to the east and south, with the Arabian Sea forming its western coast. The historic city of Margao still exhibits the cultural influence of the Portuguese, who first landed in the early 16th century as merchants and conquered it soon thereafter. Goa is a former Portuguese province; the Portuguese overseas territory of Portuguese India existed for about 450 years until it was annexed by India in 1961.

Goa is divided into 2 districts: North Goa and South Goa.

Early Goan society underwent radical change when Indo-Aryan and Dravidian migrants amalgamated with the aboriginal locals, forming the base of early Goan culture.[4]

In the later Vedic period (c.1000-500 BC) when the epic Mahabharata was written, Goa has been referred to with the Sanskrit name Gomantaka, a word with many meanings , signifying mostly a fertile land; but however, it is the Portuguese who gave Goa its name. Before they arrived on the scene, Goa, or Gove or Gowapura, was the name only of the port town near the mouth of the Mandovi River. This was also the same site on which the Portuguese later built their capital, today’s Old Goa.[5]

In the 3rd century BC, Goa was part of the Maurya Empire, ruled by the Buddhist emperor, Ashoka of Magadha. Buddhist monks laid the foundation of Buddhism in Goa.

The Kadambas were unique because they were a local dynasty that slowly came to dominate the scene by forging alliances with their neighbors and overlords, the Chalukyas. They made Chandrapur (Chandor) their capital (937 AD to 1310 AD). They subsequently moved their capital to Govapuri on the banks of the Zuari River, the site of today’s Goa Velha. The Kadambas are credited with constructing the first settlement on the site of Old Goa in the middle of the 11th century, when it was called Thorlem Gorem. The period of the Kadambas is considered to be the first golden age of Goa. The death of the last Chalukya king in 1198 weakened their alliance and this exposed Goa to the vulnerability to Muslim invasions that took place continuously after that.[11]

In 1312, Goa came under the governance of the Delhi Sultanate. The kingdom's grip on the region was weak, and by 1370 it was forced to surrender it to Harihara I of the Vijayanagara empire. The Vijayanagara monarchs held on to the territory until 1469, when it was appropriated by the Bahmani sultans of Gulbarga. After that dynasty crumbled, the area fell into the hands of the Adil Shahis of Bijapur, who established as their auxiliary capital the city known under the Portuguese as Velha Goa (or Old Goa).[12]

In 1510, the Portuguese defeated the ruling Bijapur sultan Yusuf Adil Shah with the help of a local ally, Timayya. They set up a permanent settlement in Velha Goa. This was the beginning of Portuguese rule in Goa that would last for four and a half centuries, until its annexation in 1961. The Goa Inquisition, a formal tribunal, was established in 1560, and was finally abolished in 1812.[13]

In 1843 the Portuguese moved the capital to Panaji from Velha Goa. By the mid-18th century, Portuguese Goa had expanded to most of the present-day state limits. Simultaneously the Portuguese lost other possessions in India until their borders stabilised and formed the Estado da Índia Portuguesa or State of Portuguese India. Contemporary period

After India gained independence from the British in 1947, India requested that Portuguese territories on the Indian subcontinent be ceded to India. Portugal refused to negotiate on the sovereignty of its Indian enclaves. On 19 December 1961, the Indian Army invaded with Operation Vijay resulting in the annexation of Goa, and of Daman and Diu islands into the Indian union. Goa, along with Daman and Diu, was organised as a centrally administered union territory of India. On 30 May 1987, the union territory was split, and Goa was made India's twenty-fifth state, with Daman and Diu remaining a union territory.[14]

Flora and fauna of Goa

Most of the forests in the Goa state are located in the interior eastern regions of the state. The Western Ghats, which form most of eastern Goa, have been internationally recognised as one of the biodiversity hotspots of the world. In the February 1999 issue of National Geographic Magazine, Goa was compared with the Amazon and the Congo basins for its rich tropical biodiversity.

Goa's wildlife sanctuaries boast of more than 1512 documented species of plants, over 275 species of birds, over 48 kinds of animals and over 60 genera of reptiles.[15]

Goa is also known for its coconut cultivation. The coconut tree has been reclassified by the government as a palm (like grass), enabling farmers and real estate developers to clear land with fewer restrictions.

Rice is the main food crop, and pulses (legume), Ragi (Finger Millet), and other food crops are also grown. Main cash crops are coconut, cashewnut, areca nut, sugarcane, and fruits like pineapple, mango and banana.[16] Goa's state animal is the Gaur, the state bird is the Ruby Throated Yellow Bulbul, which is a variation of Black-crested Bulbul, and the state tree is the Matti (Asna).

The important forest products are bamboo canes, Maratha barks, chillar barks, and the bhirand. Coconut trees are ubiquitous and are present in almost all areas of Goa barring the elevated regions. A variety of deciduous trees, such as teak, Sal tree, cashew, and mango trees are present. Fruits include jackfruit, mango, pineapple, and "black-berry" ("podkoam" in Konkani language). Goa's forests are rich in medicinal plants.

Goa has more than 33% of its geographic area under government forests (1224.38 km2) of which about 62% has been brought under Protected Areas (PA) of Wildlife Sanctuaries and National Park. Since there is a substantial area under private forests and a large tract under cashew, mango, coconut, etc. plantations, the total forest and tree cover constitutes 56.6% of the geographic area.

Sabha Parva, Mahabharata/Book II Chapter 13 mentions the tribes who fled out of fear of Jarasandha. Gomanta (गोमन्त) is mentioned in Mahabharata (II.13.53).[17]....And, O tiger of the Kuru race, considering the inaccessibility of that first of mountains and regarding themselves as having already crossed the fear of Jarasandha, the descendants of Madhu have become exceedingly glad. Thus, O king, though possessed of strength and energy, yet from the oppressions of Jarasandha we have been obliged to repair to the mountains of Gomanta, measuring three Yojanas in length.

Bom Jesus Basilica: Goa has two World Heritage Sites: the Bom Jesus Basilica[19] and churches and convents of Old Goa. The basilica holds the mortal remains of St. Francis Xavier, regarded by many Catholics as the patron saint of Goa (the patron of the Archdiocese of Goa is actually Saint Joseph Vaz). These are both Portuguese-era monuments and reflect a strong European character. The relics are taken down for veneration and for public viewing, per the prerogative of the Church in Goa, not every ten or twelve years as popularly thought and propagated. The last exposition was held in 2014.[20]

'Bom Jesus' (literally, 'Good (or Holy) Jesus') is the name used for the Ecce Homo in the countries of Portuguese colonization. The Jesuit church is India's first minor basilica, and is considered to be one of the best examples of baroque architecture and Portuguese Colonial architecture in India. It is one of the Seven Wonders of Portuguese Origin in the World. 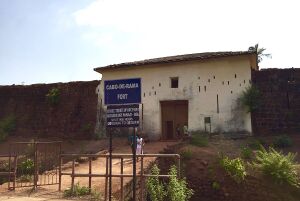 Cabo de Rama (काब दे राम) is a fort and a beach in Goa, India. Portuguese claimed the Cabo de Rama Fort after defeating the Raja (King) of Soonda and subsequently renovated it. In the past, the fort has switched hands between Hindu, Muslim monarchs and the Portuguese and had witnessed many battles in history. The present rickety structure with turrets and rusty cannons is a leftover of the Portuguese. The Portuguese equipped it with 21 guns and military barracks, as well as commandant quarters and a chapel. It was abandoned when the Portuguese left this place. Later, this fort housed a government prison till 1955 and was abandoned again. Today, this fort is in ruins, but is a popular tourist attraction of Goa.

Benaulim (बेनौलिम) is a town in Salcete sub-district and South Goa district in the Indian state of Goa. The village Benaulim (बेनौलिम) was known as Banahalli or Banawali (the village of the Bana) before the advent of the Portuguese. Bana is the Sanskrit word for 'arrow' and Halli the Kannada word for 'village'. According to the Sahyadrikhanda of the Skanda Purana, Parashurama shot his arrow into the sea and commanded the sea god Varuna recede up to the point where his arrow landed.[22] The arrow is said to have landed at Banahalli. The area was then settled by Goud Saraswat Brahmins from northern India.[23]

Ancient Banahalli was the site of the Katyayani Baneshvar temple dedicated to the deities Shiva and Parvati. The temple ruins can be still found in the village. The deities were shifted to Aversa in North Canara (modern Uttara Kannada district) in the sixteenth century.

Benaulim (बेनौलिम) is derived from Banahalli (बाणाहल्ली) or Banawali (बाणावल्ली) which means the village of the Bana people or Banasura. Bana is a gotra of Jats found in Rajasthan and Uttar Pradesh in India. Banas are descendants of King Banasura, a follower of Shiva. There is mention of Bana Chieftains along with Pallavas and as feudatory of Cholas in Tamil Nadu. The legend that Parashurama shot his arrow into the sea and created this land does not hold good. This gets support from the fact that it is site of ancient Katyayani Baneshvar temple (Katyayani = Parvati).

The ancient Mandas are even now a clan of the Jats in India. It is they who gave the first Historical Empire of the Jats in the western Plateau of Iran.[24]

It was Devaka, who established the first empire of the Manda Jats in about 700 B.C. The later Achaemenian empire was an offshoot of Manda empire, because Cyrus the Great, was son of Mandani, a daughter of the last Manda emperor, Ishtuvegu. [25]

The founder of the empire, Deiokes, hereinafter mentioned as Devaka, immediately formed a powerful army. When the country was secure, he decided to build his capital for which the mighty granite range of mount Alvanda was selected and at a height of 6,000 ft. above sea level the capital of Ecbatana was built. Its present site is the eastern part of modern Hamadan. [26]

It was a result of these wars that the first migration of the Jats took place and from the Manda Empire and from other parts of Central Asia they came to India. That is why Panini mentioned many cities of theirs in the heart of Punjab in the fifth century B.C. But memories die hard. Even today, we have our villages named after the cities lost in Iran. The names like Elam, Bhatona, Susana, Baga, Kharkhoda (Manda Kurukada), etc, are still the names of Jat villages. It is these Jats whom Buddha Prakash Calls, “ exotic and outlandish people” who came to Indian at the time of successors of Cyrus (c. 576 BC–530 BC), [27] and whom Jean Przyluski calls the Bahlikas from Iran and Central Asia. [28], [29]

Mandas in the later period are found settled in Punjab and Sindh in sixth/seventh centuries AD. Ibn Haukal says that “the infidels who inhabited Sindh, are called Budha and Mand.” “The Mands dwell on the banks of Mihran (Sindhu) river. From the boundary of Multan to the sea… They form a large population. [30], [31]

These Mandas settled in various parts of India and gave names to villages, hills and rivers. Along with Mandas came other Jat clans who gave names to other villages which include:

Similarity of place names in Goa with Jat clans

Here is a partial list of villages in Goa which appear to have similarity with Jat clans. What is their correlation is a subject matter of research.