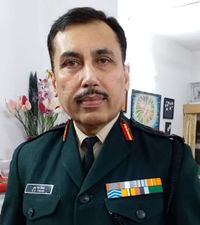 Colonel Ranvir Singh Tomar (Retd) is a veteran Army Officer from Shadipur Khair (शादीपुर) village in Khair tahsil in Aligarh district in Uttar Pradesh. He is the eldest son of Laxman Dev Tomar who had served in the Army from 1983 to 2018 in the infantry. His grand father Thakur Mahabir Singh (Tomar) was also in Military - 14th Murray's Jat Lancers.

He had his school and college education in Delhi. He did his post graduation - M.A. in Economics from Meerut University.

He was commissioned into The Grenadiers Regiment on 27 August 1983 from Officers’ Training Academy, Chennai. He was later transferred to The Jammu and Kashmir Light Infantry. During his illustrious career he had the opportunity to be part of two new Infantry Battalion raisings. One of the two was an unique Battalion, only of its kind in Indian Army ie Territorial Army Battalion,raised completely with Ex militants of Kashmir – a very hard task to train and amalgamate as Army outfit. This unit was instrumental in crushing the militancy into Kashmir, and the unit won many laurels including one Ashok Chakra, the highest peacetime gallantry award.

He has held many command and staff appointments.He has a vast experience of serving on LOC and anti militancy operations in Kashmir, Punjab and Assam. He served at the glaciated heights of Siachen Glacier at more than 20000 feet peeks.He had served with NCC Directorate where he motivated youths to join Armed Forces.He retired from the Army in March 2018. He has personal hobby of painting ,writing, motivational guidance,sports, fitness and taking care of stray animals. He is currently residing in Delhi. 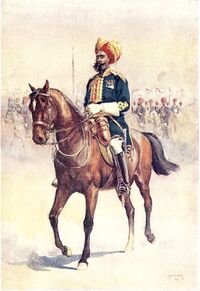 Village Shadipur in Khair Tehsil of Aligarh District is located at the bank of Upper Ganga Canal where it is crossed by the road leading from Jattari to Khurja. Village is medium in size in terms of population and the main cast of Tomar Jats are the native inhabitants . As per the history of village the words of mouth from generations that Tomars in the village had migrated from the region of Bayana, a place between Bharatpur and the Hindaun City in Rajasthan perhaps in the thirteenth century when Delhi Sultanate ruler Iltutmish recovered Bayana. Tomars in Shadipur are known as Meethe Tomars unlike in Pisawa and adjacent village Tomars are Chebuk Tomars. The village is proud of its martial traditions and prowess where they take pride in serving in the army from generations. The village has a remarkable place of pride in the Indian freedom struggle where one of the greatest revolutionary Shaheed Bhagat Singh was brought to stay in the village by Thakur Todar Singh in 1927. The youths have been serving in the armed forces from British era till present day. The history of village valour will remain incomplete without the mention of raising of a regiment 14 Murray’s Jat Lancers.

A British officer Captain John Irvine Murray was serving with Gwalior Contingent during the rebellion of 1857 who was well aware of the valour and soldierly spirit of Jats. He decided to recruit good horse riders as a cavalry fighting unit . A cavalry regiment was raised for East India Company with 250 Sepoys and 150 Sowars (cavalry men) in 1857 at Aligarh.The Regiment was thereby christened as 14 Murray`s Jat Lancers. These Jat warriors were recruited from the areas of Hathras,

Mathura, Bulandshahr, Aligarh and Khurja in Uttar Pradesh ; and from Palwal and Hodal in Haryana. It then became the first regiment to be completely manned with Jat troops in the British Indian Army. The Regiment participated in number of actions in 1857-58 especially at Meerut, Delhi and Lucknow. Muray’s Jat Lancers subsequently served in the Bhutan Field Force and formed part of the cavalry brigade of the Kabul Field Force during 1878-80 Anglo Afghan war. 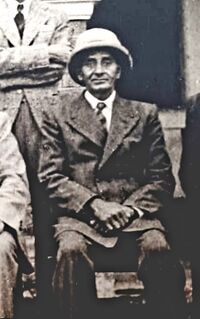 Thakur Mahabir Singh of Shadipur village was of athletic build and daring horse rider who was recruited in the elite Murray’s Jat Lancers along with his personal horse. It was indeed the best horses and strong riders who had intrinsic flair for combat skills could aspire to be picked up after tough selection. The Squadron of 14 Murray’s Jat Lancers, in which Mahabir Singh was serving, was attached to 29 Lancers at the start of World War I. The Regiment was the part of Lukhnow Cavalry Brigade of Indian Cavalry Division which was part of Indian Army Corps. Indian Army Corps was despatched to the European western front in Flanders in the region of France and Belgium to fight against the Germans.

14 Murray’s Jat Lancers was trained to fight mounted on horse back with lancers and also in dismounted role like infantry by using new short magazines Lee Enfield rifles. Cavalry units were also armed with Hotchkiss and Maxim machine guns which provided additional mobile firepower. It was increasingly becoming difficult to make a mounted dash charge against well entrenched Germans who were fighting with new rapid firing machine guns .Though mounted charge was extremely suicidal yet British favoured mounted charge against slow moving tanks which were finding it difficult to traverse slush and mud of Flanders.

There were huge casualties of horses and the cavalry men. Mahabir Singh used to recall a daring charge with sabre and lancers against the Germans who had prepared impregnable defences fighting from the trenches in the battle of Cambrai where Germans had to retreat to the Hindenburg line. Huge fatal casualties were suffered by the Indian Army Corps and most of Indian soldiers who could survive were mostly injured.

The Indian Army Corps at the end of 1915 was moved to Middle East theatre in Palestine and Mesopotamia (present day Iraq) to fight against the Ottoman Empire forces. There also in a tough fighting battle, a daring mounted uphill cavalry charge was made against the defences at small hillock at Khas Samariveh in west bank of Jordon river in Palestine on 23 September 1918 resulting in the defeat of the Ottoman forces. In this action Risaldar Badlu Singh was awarded the highest gallantry award of Victoria Cross (posthumously). Perhaps the first Jat to have been conferred the Victoria Cross.

cavalrymen are carrying out reconnaissance before the charge

Mahabir Singh after completing the army service was made officer in charge of Bonded Pharmacy , Lukhnow and later, he also served as Excise Inspector in Meerut range. Mahabir Singh expired in July 1960. His son Laxman Dev Tomar had studied in boarding school in Gurukul Kangdi Haridwar and his daughter Vidhyawati studied in Kanya Gurukul Indraprastha. Laxman Dev Tomar was selected for Officers Training School as commissioned officer but due to some reasons could not join the army and then after completion of MA LLB from Kanpur university joined the Lok Sabha Secretariat ; and he retired as Senior Editor of Debates in 1981.Wife of Laxman Dev Tomar retired as principal of a school in Delhi. Vidhyawati daughter of Mahabir Singh was married to an Army Officer Major D.R. Singh. Major D.R. Singh was instrumental in establishing Maharaja Surajmal Institute in Delhi and he was the first principal of the institute. Son of Major D.R. Singh named Major R.P. Singh also served in the army.

Colonel Ranvir Singh Tomar is the eldest son of Laxman Dev Tomar who had served in the Army from 1983 to 2018 in the infantry. He actively served in Kashmir for more than 12 years against militancy. He also rendered active service in Punjab and Assam militancy besides two years extremely demanding and challenging tenure in extreme cold climate at high altitude in Siachen glaciers in Ladakh. After retirement he is engaged in philanthropy and is providing free guidance to youth to prepare for competitions. Other son Captain Vikram Singh Tomar had also served in the Army and saw war action in Sri Lanka in 1987 to 1989. Presently he is residing in USA. His third son Dipendra Singh Tomar is engaged in business and he has also widely toured abroad.