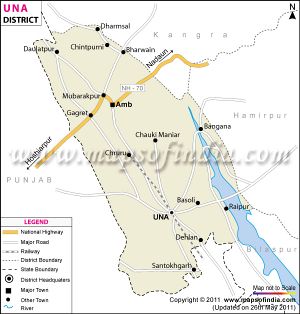 Una (ऊना) is a city and district in Himachal Pradesh.

It is situated in the Punjab region of India. Una is located at 31.48°N 76.28°E. It has an average elevation of 369 metres. Una district shares its border with the Hoshiarpur District and ropar district of Punjab. The terrain is generally a plain with low hills. Una has been identified as a main industrial hub and has become a transit town for travellers going to the famous city of Dharamshala or locations within the Himalayas such as Kullu, Manali, Jawalamukhi, and Chintpurni.

Una lies in the southwestern part of Himachal Pradesh, with the beautiful Sivalik hills of the Himalayas gently rolling on one side. The Satluj river passes alongside Shahtalai hills, known for the shrine of Baba Balak Nath.

Una is geograhically one of the most apt and versatile area of Himachal Pradesh with close vicinity to Chandigarh connected by broad gauge railway and four lane express highway.

Himachal Jat Kalyan Parishad (Regd.) is a registered organization working for the welfare of Jats.

Una is home to the Kila, which is a historical fort and an ancestral home of the descendants of the first guru of the Sikhs, Guru Nanak.

H.A. Rose[1] writes that Dod (दोद), is a Rajput tribe found in Hoshiarpur. The Dods are almost entirely confined to the Bit tract in the Siwaliks, their head being the Rana of Manaswal. The Dods are Jadav or Chandrabansi by origin......

Four leaders of the tribe migrated from Udaipur to Garh Mandāl,1100 years ago, and thence to Garh Muktasar. Thence Jodh Chand seized Manaswal, expelling Hira, the Mahton leader, whose tribe held the tract, 40 generations ago. Rana Chacho Chand, the 19th Rana, was attacked by the Katoch ruler, but his brother Tilok Singh (Tillo) defeated him at Mahudpur in Una, and Tillo's shrine at Bhawani is reverenced to this day. In Sambat 1741 Rana Jog Chand repelled a Jaswal invasion. Rana Bakht Chand annexed Bhalan, with 12 dependent villages, in Una. His successor, Ratn Chand, repelled a Jaswal army under

[Page-244]: Bhagwan Singh Sonkhla who was killed, and in his memory a shrine at Kharali was erected. A treaty now defined the Jaswal and Dod territories. Under Mian Gulab Singh regent during Achal Chand's minority, Nadir Shah is said to have visited the tract and ordered a massacre of the Rasali people, but the Rana obtained from him a grant of Bathri, then a Jaswal village. Rana Jhagar Chand, however, espoused the Jaswals' cause, when they were attacked by Sansar Chand of Kangra in 1804 A.D., and repulsed him. On Ranjit Singh's invasion of the Manaswal plateau, the Rana was confirmed in his possessions, subject to a contingent of 15 horse. The rule of inheritance was primogeniture, mitigated by a system of lopping off villages as fiefs for younger sons, many of whose descendants still hold villages, thus reducing the size of the estate.

Chintpurni and Baba Balak Nath are the temples most visited by Hindus and Sikhs.

Brahmahooti, situated near Mehatpur, is one of the two temples in India dedicated to God Brahma, the other being in Pushkar, Rajasthan. Though less known, this temple is situated close to a serene lake in the laps of hills.