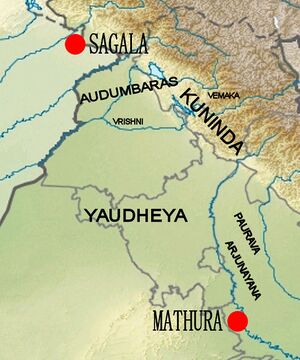 Arjunayana (अर्जुनायन) is a term mentioned by Panini in Ashtadhyayi. [1]

They emerged as a political power during the Sunga period (c. 185 – 73 BCE). In the Allahabad Pillar Inscription of Samudragupta (c. AD 335 – 380), the Arjunayanas figure among the autonomous political communities bordering on the Gupta Empire who accepted the overlordship of Samudragupta. They also find couple of references in Bṛhat Saṃhitā of Varahamihira (6th c AD).[2][3] According to Dr Buddha Prakash, the Arjunayanas are mentioned as Prajjunakas in Kautiliya's Arthashastra [4] which text also places them in the northern division of India.[5][6] Dr V. A. Smith locates their republic in Alwar and Bharatpur states now in Rajasthan which view has been rejected by R. C. Majumdar.

Tej Ram Sharma[7] writes that Panini[8] refers to the worshipper of Arjuna, called Arjunaka, together with the devotee of Vasudeva, called Vasudevaka. This remark implies that Arjuna was treated as a deity at the time of Panini and his followers occupied a prominent position. [9] The Kasika replaces Auddālakayana of Patanjali by Arjunayana, [10] the name of a tribe nearer to its own time in discussing the meaning of Prachya-bharata (II.4.66).

V S Agarwal [11] writes names of some important tribes in the Ganapatha, which deserve to be mentioned as being of considerable importance. We are indebted to the Greek historians of Alexander for the information that most of these were republics. These tribes include - Hāstināyana, Āśvāyana, Āśvakāyana. The first is mentioned in Sutra VI.4.174, the second in IV.1.110, and the third in Naḍadi gana (IV.1.99)

The Asvayanas and the Asvakayanas were the bravest fighters of all, being strongly entrenched in their mountainous fortresses. Alexander himself directed the operations against them. The Ashvakayana capital at Massaga or Masakavati is given in Bhashya as the name of a river (IV.2.71), that should be looked for in that portion of the Suvastu in its lower reaches where Mazaga or Massanagar is situated on it at a distance of 24 miles from Bajaur in the Yusufzai country. In times of danger the Asvakayanas withdrew into the impregnable defences of their hilly fortress which the Greeks have named Aornos. It appears to be same as Varaṇā of the Ashtadhyayi (see ante, p.69, for its identification with modern Uṇrā on the Indus). The Greeks also mention another of their towns, viz., Arigaeon, which commanded the road between the Kunar and Panjkora valleys, and is comparable with Ārjunāva of the Kashika (ṛijunāvām nivāso deshaḥ, IV.2.69).

Ram Sarup Joon[13] writes that ....Samudra Gupta conquered the whole of Punjab and a major part of India. The clans defeated by him included

Samudra Gupta also subjugated the powerful Shaka and Kushana dynasties. In keeping with ancient traditions he performed Asvamedh Yagya (Horse sacrifice ceremony). He was not only an eminent soldier but also a poet and musician of omen caliber. Inspite of being a Jat he has not been maligned by Brahmin historians of Rajput era. He died in 365 A.D. [? The date of his death is accepted by all historians as 375 A.D.]

The findspot of Arjunayana coins indicate their territory within the triangle formed by Delhi-Jaipur-Agra.[18] The Arjunayana coins resemble those of the Yaudheya coins which show their contemporariness. They are several varieties. In one type, the obverse shows a bull and a standing goddess on the reverse. On another type, bull is standing before a tree in railing on the obverse and another bull facing a linga symbol and also carrying a legend Arjunayanajaya on the reverse. The third variety has a bull in the obverse and a swastika with taurine symbol at the end of arms and a branch or palm leaf and the legend Janayana on the reverse. These coins show that these people were devotees of the god Siva.

2nd century coin evidence attests that the Arjunayanas and Yaudheyas were neighborly tribes and had collaborated in their joint fight against the foreign invaders like the Yavanas, Sakas, Pahlavas and later the Kushanas. Thus, some people speculate that Arujayanas and Yaudheyas may have been allied or related tribes. Adiparva of Mahabharata references Yaudheya as the son of Pandava Yudhishtra.[14] Based on these references, these scholars have speculated that Yaudheyas had descended from, Yaudheya, son of Yudhishtra. And similarly, it has also been speculated that Arjunayanas had also probably descended from Pandava hero Arjuna. This view is purely mythical and anachronistic. The Yaudheyas as a full fledged tribe had participated in the Kurukshetra war on the side of Kauravas,[15] the enemies of Pandavas. Furthermore, prior to Kurukshetra war, the Yaudheyas, together with other Punjabi tribes like the Sibis, Trigartas, Rajanyas, Madras, Kekayas, Ambasthas, Kaukuras etc, had joined the Rajasuya ceremony of the Pandavas and had brought tributes to Yudhishtra.[16] Thus, the claim that Yaudheyas had descended from Yaudheya, son of Pandava Yudhishtra is utterly baseless. Similarly, there is no basis, whatsoever, in the speculation that Arjunayanas may have descended from the Pandava hero Arjuna. These seem to be merely fantastic myths invented at later time to connect the Yaudheyas as well as the Arjunayanas to the heroic Pandava lineage. The Arjunayanas are not mentioned in the Mahabharata, Ramayana or any Vedic texts. While Yaudheyas are mentioned in the list of Ayudhajivi Samghas of Pāṇini,[27] the Arjunayanas don't find any reference as such. It may also be a mere speculation that the Prajjunakas of Kautiliya's Arthashastra [28] are same as Arjunayanas (or Arjunayanakas).[29] Thus, the Arjunayanas/Arjunavanas or Arjunayanakas are, in all probability, a post-Alexandrian phenomena and it is highly likely that this people had been fugitives from the Arigaion (Arjunava) region of the Kunar/Swat valleys.

The territory of the Arjunayanas bordered on the Gupta empire. They are recorded in the Allahabad Pillar inscription of Samudragupta (c.AD 335 – 380) and are mentioned together with Malavas, Yaudheyas, Madrakas, Abhiras, Prarjunas, Sanakanikas, Kakas, Kharaparikas and other tribes.[17][18] They are believed to have been vanquished by Samudragupta, around 335 AD and amalgamated into the Gupta empire. We quote here the Line-22 here:

The modern descendants of the Arjunayanas

Anusasana Parva/Book XIII Chapter 4 mentions ancestry of Viswamitra, a Kshatriya whose sons became progenitors of many races of Brahmanas and founders of many clans. Arjunayana is mentioned in verse (XIII.4.55). [19]