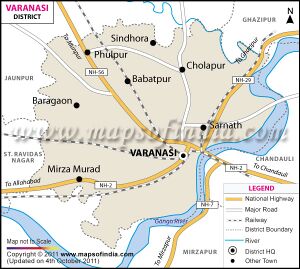 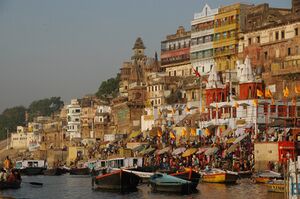 Varanasi (वाराणसी) is a famous Hindu holy city in Uttar Pradesh. It is one of the twelve revered Jyotirlingas of the Lord Shiva. It is one of the oldest continuously inhabited cities in the world, dating back thousands of years and contemporaneous with the Sumer civilization. It is often also referred to as "city of temples and learning."

Varanasi is situated on the banks of the Ganga River in the state of Uttar Pradesh.

According to Alexander Cunningham[2] the Varanasi gets name from River Varana and the Nala names Asi as Banaras is situated on the left bank of the Ganges, between the Barna Nadi on the north-east, and the Asi Nala on the south-west.

V. S. Agrawala[3] writes that Ashtadhyayi of Panini mentions janapada Kāśi (काशि) (IV.2.116) - Panini does not mention Kashi as independent monarchy like Magadha or Kosala. Panini mentions Vārāṇasī and its citizens as Vārāṇaseya.

Kashi (काशि), is mentioned by Panini in Ashtadhyayi. [8]

Varanasi (वाराणसी) is mentioned by Panini in Ashtadhyayi. [9]

Dineschandra Sircar[11] writes.... Some important old Indian names found in Burma are Aparanta, Avanti, Varanasi, Champanagara, Dvaravati, Gandhara, Kamboja, Kailasha, Kusumapura, Mithila, Pushkara, Pushkaravati, Rajagriha, etc. and the names Sankashya (Tagaung on the Upper Irawadi), Utkala (from Rangoon to Pegu) and Vaishali (modern Vethali in the Akyub district also fall in the same category.[12] The name of the well-known river Irawadi reminds us of Iravati (modern Ravi River), one of the famous tributaries of the Indus.

Visit of Varanasi by Xuanzang in 637 AD

Alexander Cunningham[13] writes that In the seventh century the kingdom of Po.lo.ni.sse, or Varanasi, was 4000 li, or 667 miles, in circuit, and the capital, which was on the western bank of the Ganges, was from 18 to 19 li, or 3 miles, in length, and from 5 to 6 li, or 1 mile, in breadth. Its probable boundaries, with reference to the surrounding kingdoms, were the Gomati river on the north, a line drawn from the Gomati to Allahabad and up the Tons to Bilhari on the west, a line drawn from Bilhari to Sonhat on the south, and the Rehand Karmmnasa and Ganges rivers on the east. "With these limits the circuit is 595 miles taken direct on the map, or about 650 miles in actual road measurement.

The city of Banaras is situated on the left bank of the Ganges, between the Barna Nadi on the north-east, and the Asi Nala on the south-west. The Barna,

[p.436]: or Varana, is a considerable rivulet, which rises to the north of Allahabad, and has a course of about 100 miles. The Asi is a mere brook, of no length, and, owing to its insignificant size, it does not appear in any of our most detailed maps. It is not entered in the Indian Atlas Sheet, No. 88, which is on the scale of 4 miles to the inch, nor even in the larger lithographed map of the district of Banaras, on the double scale of 2 miles to the inch. This omission has led the learned French academician M. Vivien de Saint- Martin to doubt the existence of the Asi as a tributary of the Ganges, and he conjectures that it may be only a branch of the Barna, and that the joint stream called the Varanasi[14] may have communicated its name to the city. The Asi Nala will, however, be found as I have described it, in James Prinsep's map of the city of Benares, published by Hullmandel, as well as in the small map which I have prepared to illustrate this account of the remains at Banaras. The position of the Asi is also accurately described by H. H. Wilson in his Sanskrit Dictionary, under the word Varanasi. I may add that the road from Banaras to Udmnagar crosses the Asi just outside the city, and only a short distance from its confluence with the river. The points of junction of both streams with the Ganges are considered particularly holy, and accordingly temples have been erected both at Barna sanggam below the city, and at Asi sangam above the

city. From the joint names of these two streams, which bound the city to the north and south, the Brahmans derive Varanasi, or Varanasi, which is said to be the Sanskrit form of the name of Banaras. But the more usual derivation amongst the common people is from Raja Banar, who is said to have rebuilt the city about 800 years ago.

Both of these streams are mentioned by Abul Fazl,[15] who says " Baranasi, commonly called Banaras, is a large city situated between two rivers, the Barna and the Asi. Bishop Heber[16] also mentions that he was informed by the Raja of Banaras that the name " had anciently been Baranas, from two rivers, Bara and Nasa, which here fall into the Ganges." The worthy Bishop supposes that they must join the Ganges underground, as no such rivers are set down on the map ; but two pages afterwards he records that his boats arrived " off the mouth of the small river which leads to Secrole," that is to the cantonment of Banaras. It may perhaps be objected that this was only a report from his servants, and that he had not actually seen the river ; but as the Bishop lived with Mr. Brooke to the north of the Barna, he must have crossed that river by the large stone bridge at least twice every day during his stay at the holy city of the Hindus.

Banaras is celebrated amongst the Buddhists as the scene where the great teacher first expounded his doctrine, or as they metaphorically express it, where he first began " to turn the wheel of the law." This is one of the four great events in the life of Buddha, and the stupa which was built upon the spot was esteemed as one of the four great monuments of

[p.438]: Buddhism. This stupa, now called Dhamek, is situated about 3½ miles to the north of the city, amidst an extensive mass of ruins, which are surrounded on three sides by large artificial lakes. The name of Dhamek is most probably only an abbreviation of the Sanskrit Dharmmopadesaka, the "Teacher of Dharmma." This is the common term still in use to designate any religious teacher ; but bearing in mind that on this spot Buddha first began to " turn the wheel of the law " (dharmma-chakra), the name is peculiarly appropriate for the stupa. The term is also used in the simpler form of Dharmmadesaka, which in familiar conversation would naturally be shortened to Dhammadek and Dhamek.

The earliest name of this city was Kashi, which is still in common use, either alone or joined with the later name, as Kasi-Banaras. It is, perhaps, the Kassida or Kassidia, of Ptolemy. The name is referred to Kasi-raja, who was one of the early progenitors of the Lunar race. He was succeeded by twenty descendants, all Rajas of Kasi, amongst whom was the celebrated Divodasa. 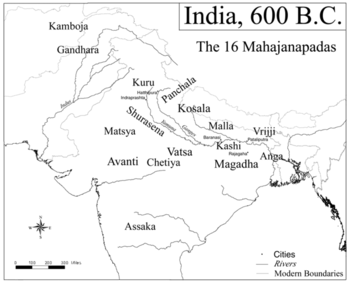 Hukum Singh Panwar [17] writes: that the original Kashi, according to Dr. Silak Ram Phogat 142, was situated in Haryana, the south-eastern part of the Sapta Saindhava country. Dr. Silak Ram Phogat has identified it, in his recent research, with Kameshawar, a Tirathsthan or centre of pilgrims (Mbt.Aranyaka Parva, 81. 46; Vamana Purana Saramahatmya, 14.42) traditionally known as Kashisvara, on the ruins of which now is the village named Theh Polar, 15 Km. NW of Kaithal (Kapisthal, birth-place of Hanuman), in the Guhla Tehsil of Kurukshetra district. We mention this en passant, since it indirectly corroborates our stand on the location of Ayodhya and Vaisali.

Kashgar/ Kasgar (कासगर) or Kashi is a city in the western part of the Xinjiang Uyghur Autonomous Region of the People's Republic of China.

The culture of Varanasi is deeply associated with the river Ganges and the river's religious importance. The city has been a cultural and religious center in northern India for thousands of years. Varanasi has its own style of classical Hindustani music, and has produced prominent philosophers, poets, writers and musicians in Indian history, including Kabir, Ravi Das, Munshi Premchand, Jaishankar Prasad, Acharya Ram Chandra Shukla, Pandit Ravi Shankar, Hariprasad Chaurasia and Ustad Bismillah Khan. Varanasi is the home of Banaras Hindu University. Tulsidas wrote his Ramcharitmanas here, and Gautam Buddha gave his first sermon at Sarnath near Kashi. The language spoken in Varanasi is Kashika Bhojpuri related to Hindi.

Holy city -Varanasi is a holy city in Hinduism, one of the most sacred pilgrimage places for Hindus of all Hindu denominations. The Hindu God Shiva supposedly once lived there making many Hindus want to go there on a pilgrimage. More than 1,000,000 pilgrims visit the city each year. Here is the holy shrine of Lord Kashi Vishwanath, (an aspect of Lord Shiva) and one of the twelve revered Jyotirlingas of the Lord Shiva. Hindus believe that bathing in the river Ganga will remit sins and that dying in the holy city of Kashi (Varanasi) circumvents rebirth. This holy city is worshipped as one of the Shakti Peethas where Divine Mother Dakshayani or Sati's earring fell and so devotees believe that on that spot stands the present Vishalakshi Temple and Hindus of the shakti sect come to the city because the river it self is said to be shakti (goddess) its self It is here that Adi Shankara wrote his commentaries on Hinduism, leading to the great Hindu revival.

It is not just the Hindus venerate Varanasi today, for the city has links with Buddhism and Jainism as well. In the residential neighbourhood of the city lies Sarnath, the site of the deer park where Gautama Buddha is said to have given his first sermon about the basic principles of Buddhism. It is one of the four pilgrimage sites designated by Gautama Buddha, the other three being Kushinagar, Bodh Gaya, and Lumbini. The Dhamek Stupa is one of the few pre-Ashokan stupas remaining, although only the foundations remain. Also remaining is the Chaukhandi Stupa commemorating the spot where the Buddha met his first deciples, dating back to the fifth century or earlier and later enhanced by the addition of an octagonal tower.

Varanasi is also a pilgrimage place for Jains. It is believed to be the birthplace of Parshvanatha, the twenty-third Tirthankar. Vaishnavism and Shaivism have co-existed in Varanasi harmoniously. The city has also been influenced by Islamic culture.

This explains the continuous tension between communities in the city and the fact that really ancient monuments are few. However, Varanasi has kept its sacred position as the Holy City of Hinduism.