Sumitta (Sanskrit: Sumitra) was King of Sinhapura mentioned in Mahavansa. He was the second son of Sinhabahu of Sinhapura in the kingdom of Lala, the eldest was named Vijaya (543–505 BCE), the first King of Sri Lanka. [1] He was married to the daughter of the Madda (Madra) king. Sumitta's youngest son Panduvasudeva was made the King of Lanka (504 BC - 474 BC). [2]

James Todd[3] writes....Sumitra concludes the line of Suryavanshi Rama from the Bhagavat Purana. Thence it is connected with the present line of Mewar, by Jai Singh's authorities ; which list has been compared with various others, chiefly Jain, as will be related in the annals of Mewar.

It will be seen that the line of Surya exhibits fifty-six princes, from Lava, the son of Rama, to Sumitra, the last prince given in the Puranas. Sir William Jones exhibits fifty-seven.

To these fifty-six reigns I should be willing to allow the average of twenty years, which would give 1120 from Rama to Sumitra, who preceded by a short period Vikramaditya ; and as 1100 have been already calculated to have preceded the era of Rama and Yudhishthira, the inference is, that 2200 years elapsed from Ikshwaku, the founder of the Solar line, to Sumitra.

Mahavansa/Chapter 6 tells ....Sinhabahu was a legendary king of ancient India, mentioned in Sri Lankan text Mahavansa. He founded the City Sinhapura in the Lala Country. He was father of Vijaya (543–505 BCE), the first King of Sri Lanka.

Mahavansa/Chapter 6 tells us that ....In the country of the Vangas in the Vanga capital there lived once a king who married with the daughter of the king of the Kalingas. Their daughter went forth from the house, desiring the joy of independent life; unrecognized she joined a caravan travelling to the Magadha country. In the Lala country she bore twin-children, a son and a daughter named Sihabahu and Sihasivali.

Mahavansa/Chapter 6 tells us that When Sinhabahu was sixteen, he escaped with his mother and sister, Sinhasivali, and arrived in the capital of Vanga. He later killed his father for a reward and was offered the throne of Vanga.

Mahavansa/Chapter 6 tells that Sinhabahu accepted the kingship but handed it over then to his mother's husband and he himself went with Sinhasivali to the land of his birth. There in the country of Lála he built a city, and they called it Sinhapura, and in the forest stretching a hundred yojanas around he founded villages.

Mahavansa/Chapter 6 tells....In the kingdom of Lala, in that city did Sihabahu, ruler of men, hold sway when he had made Sihasivali his queen. As time passed on his consort bore twin sons sixteen times, the eldest was named Vijaya (543–505 BCE), the second Sumitta; together there were thirty-two sons. In time the king consecrated Vijaya as prince-regent, the first King of Sri Lanka.

Mahavansa/Chapter 8 writes ... In Sihapura, after the death of king Sihabahu, his son Sumitta was king; he had three Sons by the daughter of the Madda (Madra) king. Sumitta being old he sent his youngest son Panduvasudeva (r.504 BC - 474 BC) to Lanka. Panduvasudeva took with him thirty-two sons of ministers and embarked (with them) in the disguise of mendicant monks. The ministers entrusted Panduvasudeva with the sovereignty of Lanka. He made Bhaddakaccana, youngest daughter of Sakka Pandu as his consort. Sakka Pandu for seeing the destruction of Shakyas took his followers with him and went to another tract of land on the further side of the Ganges and founded a city there and ruled there as king.

How did such a deeply degrading thought enter my lord's imagination? [203] What is this blemish observed in me? Has Sumitra's son faded from his mind? Have Vrikodara and others been forgotten? Not thus heedless of those who love him, thus singly fixed upon achieving his own ends, used my lord's high preeminence to be. Again, my lord being gone to a hermitage, who indeed could so long for life as even to entertain a thought of the earth?

Sumitra is mentioned at S.No.97 in the Genealogy of Pariharas:

Sumitra in Genealogy of Krishna

Jambavati was the name of the seventh wife of Krishna, whose eldest son was called Samba. Jambavati was the mother of Samba, Sumitra, Purujit, Shatajit, Sahasrajit, Vijaya, Chitraketu, Vasuman, Dravida and Kratu.[5]. Samba obtained possession of the tracts on both sides the Indus, and founded the Sind-Samma dynasty, from which the Jharejas are descended. There is every probability that Sambus of Samba-nagari (Minagara), the opponeot of Alexander, was a descendant of Samba, son of Krishna. The Jhareja chroniclea, in ignorance of the origin of this titular appellation, say that their " ancestors came from Sham, or Syria." [6]

Adi Parva, Mahabharata/Mahabharata Book I Chapter 57 Names of all those Nagas that fell into the fire of the snake-sacrifice. Sumitra is mentioned in Mahabharata (I.57.17) born in the race of Dhritarashtra. [7]....Varahaka, Varanaka, Sumitra, Chitravedaka, Parashara, Tarunaka, Maniskandha and Aruni.

Adi Parva, Mahabharata/Mahabharata Book I Chapter 67 mentions Sumitra along Asuras in Genealogy of Krodhavasa in Mahabharata (I.67.58)[8]:

Krodhavasa, of whom I have already spoken to thee, were born many heroic kings on earth. Madraka, and Karnaveshta, Siddhartha, and also Kitaka; Suvira, and Suvahu, and Mahavira, and also Valhika, Kratha, Vichitya, Surasa, and the handsome king Nila; and Dhama, and Bhumipala; and Dantavakra, and he who was called Durjaya; that tiger amongst kings named Rukmi; and king Janamejaya, Ashada, and Vayuvega, and also Bhuritejas; Ekalavya, and Sumitra, Vatadhana, and also Gomukha; the tribe of kings called the Karushakas, and also Khemadhurti; Srutayu, and Udvaha, and also Vrihatsena; Kshema, Ugratirtha, the king of the Kalingas; and Matimat, and he was known as king Iswara; these first of kings were all born of the Asura class called Krodhavasa.

Adi Parva, Mahabharata/Mahabharata Book I Chapter 188 mentions Kshatriyas came on Swayamvara of Draupadi. Sumitra is mentioned in Mahabharata (I.188.9)[9]

Sabha Parva, Mahabharata/Book II Chapter 26 mentions that Bhimasena subjugated the countries that lay to the East, Sumitra is mentioned in Mahabharata (II.26.10)

And the son of Kunti, having vanquished that monarch by performing feats that excelled in fierceness, subjugated the eastern region. Then that prince of the Kuru race, endued with great prowess going into the country of Pulinda in the south, brought Sukumara and the king Sumitra under his sway.

Sumitra in Genealogy of Rama

Reference - A study of the Bhagavata Purana; or, Esoteric Hinduism by Purnendu Narayana Sinha, Benares,1901, Page-199 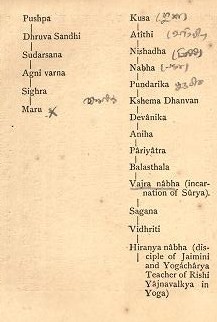 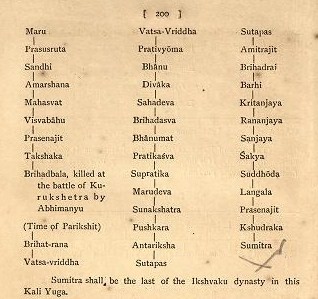 Ancestry of Langala in Bhagavata Purana

The story of Rama as told in the Ramayana is widely and universally known. It is therefore unnecessary to repeat that story from the Bhagavata Purana.

Sumitra shall be shall be the last of Ikshvaku dynasty in this Kaliyuga.