It gets its name from Andhra rulers rulers. They were branch of Yadavas. [4]

There has been mention of Andhra rulers numbering 22 in Shrimad Bhagwat, 24 in Vishnu Purana, 30 in Matsya Purana. they have been mentioned as Andhra/Andhrabhratya there. They are descendant of samrat Yayati's great grandson Dirghatama's (दीर्घत्तमा) son Andhra (आंध्र).

Ram Sarup Joon [6] writes that Adrayan or Adhrayan, Andha or Adhlayan gotra is very old. A ruler belonging to this dynasty took part in the Mahabharat. In Vishnu Puran there is reference to 176 rulers of this dynasty. Their capital was Jhirka Kalan. A rock edict of this dynasty has also been found, which tells us how Bindusara conquered the Andhra Kings.

Mr. V. A. Smith has also mentioned the ruler of this dynasty in his book. According to him they hailed from Andhra Desh and ruled in the Punjab and Kashmir. Probably their rule also extended over some parts of Sindh, Bihar and the South. From one branch of this gotra called Wadiyar, are the present rulers of Mysore.

In Ch 5.22: Invasion of the Land of the Cathaeans by Alexander recorded by Arrian[7]....When Alexander was informed that Porus and Abisares had marched against them with their own forces and had roused many other tribes of the independent Indians to arms, he made a forced march against the Cathaeans, and on the second day after starting from the river Hydraotes he arrived at a city called Pimprama, inhabited by a tribe of Indians named Adraistaeans, who yielded to him on terms of capitulation. Giving his army a rest the next day, he advanced on the third day to Sangala, where the Cathaeans and the other neighbouring tribes had assembled and marshalled themselves in front of the city upon a hill which was not precipitous on all sides.

Ch 5.22: Invasion of the Land of the Cathaeans by Alexander

Arrian[8] writes.... MEANTIME he received information that the tribe called Cathaeans and some other tribes of the independent Indians were preparing for battle, if he approached their land; and that they were summoning to the enterprise all the tribes conterminous with them who were in like manner independent. He was also informed that the city, Sangala by name1, near which they were thinking of having the struggle, was a strong one. The Cathaeans themselves were considered very daring and skillful in war; and two other tribes of Indians, the Oxydracians and Mallians, were in the same temper as the Cathaeans. For a short time before, it happened that Porus and Abisares had marched against them with their own forces and had roused many other tribes of the independent Indians to arms, but were forced to retreat without effecting anything worthy of the preparations they had made. When Alexander was informed of this, he made a forced march against the Cathaeans, and on the second day after starting from the river Hydraotes he arrived at a city called Pimprama, inhabited by a tribe of Indians named Adraistaeans, who yielded to him on terms of capitulation. Giving his army a rest the next day, he advanced on the third day to Sangala, where the Cathaeans and the other neighbouring tribes had assembled and marshalled themselves in front of the city upon a hill which was not precipitous on all sides. They had posted their waggons all round this hill and were encamping within them in such a way that they were surrounded by a triple palisade of waggons. When Alexander perceived the great number of the barbarians and the nature of their position, he drew up his forces in the order which seemed to him especially adapted to his present circumstances, and sent his horse-archers at once without any delay against them, ordering them to ride along and shoot at them from a distance; so that the Indians might not be able to make any sortie, before his army was in proper array, and that even before the battle commenced they might be wounded within their stronghold. Upon the right wing he posted the guard of cavalry and the cavalry regiment of Clitus; next to these the shield-bearing guards, and then the Agrianians. Towards the left he had stationed Perdiccas with his own regiment of cavalry, and the battalions of foot Companions. The archers he divided into two parts and placed them on each wing. While he was marshalling his army, the infantry and cavalry of the rear-guard came up. Of these, he divided the cavalry into two parts and led them to the wings, and with the infantry which came up he made the ranks of the phalanx more dense and compact. He then took the cavalry which had been drawn up on the right, and led it towards the waggons on the left wing of the Indians; for here their position seemed to him more easy to assail, and the waggons had not been placed together so densely.

1. Sangala is supposed to be Lahore; but probably it lay some distance from that city, on the bank of the Chenab.

Alexander Cunningham[9] writes that From Kosala, Hwen Thsang proceeded to the south for 900 li, or 150 miles, to An-to-lo, or Andhra[10] the modern Telingana. The capital was named Ping-ki-lo, which M. Julien transcribes as Vingkhila, but it has not yet been identified. We know that Warangol, or Varnakol, was the capital of Telingana for several centuries afterwards, but its position does not agree with the pilgrim's narrative, as it lies too far from Chanda on the Pain Ganga river, and too near to Dharanikotta on the Kistna. The Chinese syllables also do not represent the name of Warangol, although they might perhaps be taken for Vankol. They may be read as Bhimgal, which is the name of an old town in Telingana mentioned by Abul Fazl. But Bhimgal is only 120 miles to the south-west of Chanda, instead of 150 miles to the south or south-west, and is upwards of 200 miles to the north of Dharanikotta instead of 167 miles. I should therefore be inclined to accept the Chinese syllables as a blundering transcription of Warangol itself, if the positions agreed more nearly. But the actual distance between Varangol and Chanda is 160 miles, and between Varangol and Dharanikotta only 120 miles. It is, therefore, too near the latter place, and too far from the former place, according to Hwen Thsang's account. If we might adopt Amaravati in Berar as the capital of Kosala, then Bhimgal would represent the capital of Andhra beyond all doubt, as it stands rather short of midway between

[p.528]: Chanda and Dharanikotta ; but both the distances are too great to suit Hwen Thsang's numbers of 900 li and 1000 li, or 150 miles and 167 miles. The position of Elgandel, which is midway between Bhimgal and Varangol, agrees better with the pilgrim's narrative, as it is about 130 miles from Chanda, and 170 miles from Dharanikotta. I am, therefore, willing to adopt Elgandel as the probable representative of the capital of Andhra in the seventh century of the Christian era.

The province of Andhra is described as 3000 li, or 500 miles, in circuit. No frontier is mentioned in any direction ; but it may be presumed that the Godavari river, which is the modern boundary to the north and east, was likewise the ancient one, as it is also the limit of the Telugu language towards the north. To the west, where it met the great kingdom of Maharashtra, it cannot have extended beyond the Manjhira branch of the Godavari. The territory may, there- fore, be described as stretching from the junction of the Manjhira and Godavari to Bhadrachelam on the south-east, a length of 250 miles, and to Haidarabad on the south, a length of 100 miles, the distance between Haidarabad and Bhadrachelam being, 175 miles. These limits give a total circuit of 525 miles, or nearly the same as that stated by Hwen Thsang.

The Andhras are mentioned by Pliny[11] under the name of Andarae, as a powerful nation, who possessed thirty fortified cities, and a large army of one hundred thousand infantry, two thousand cavalry, and one thousand elephants. They are also noted in the Pen-tingerian Tables as Andrae-Indi. Wilson quotes these

[p.529]: Tables as placing the Andhras " on the banks of the Ganges,"[12] but the extremely elongated form of the Pentingerian Map has squeezed many of the peoples and nations far out of their true places. A much safer conclusion may be inferred from a comparison of the neighbouring names. Thus the Andrae-Indi are placed near Damirice, which I would identify with Ptolemy's Limyrike by simply changing the initial A to A, as the original authorities used for the construction of the Tables must have been Greek. But the people of Limyrike occupied the south-west coast of the peninsula, consequently their neighbours the Andrae-Indi must be the well-known Andhras of Telingana, and not the mythical Andhras of the Ganges, who are mentioned only in the Puranas. Pliny's knowledge of the Andarae must have been derived either from the Alexandrian merchants of his own times, or from the writings of Megasthenes and Dionysius, the ambassadors of Seleukus Nikator and Ptolemy Philadelphus to the court of Palibothra. But whether the Andarae were contemporary with Pliny or not, it is certain that they did not rule over Magadha at the period to which he alludes, as immediately afterwards he mentions the Prasii of Palibothra as the most powerful nation in India, who possessed 600,000 infantry, 30,000 horse, and 9000 elephants, or more than six times the strength of the Andarae-Indi.

The Chinese pilgrim notices that though the language of the people of Andhra was very different from that of Central India, yet the forms of the written characters were for the most part the same. This statement is specially interesting, as it shows that

[p.530]: the old Nagari alphabet introduced from Northern India was still in use, and that the peculiar twisted forms of the Telugu characters, which are found in inscriptions of the tenth century, had not yet been adopted in the south. 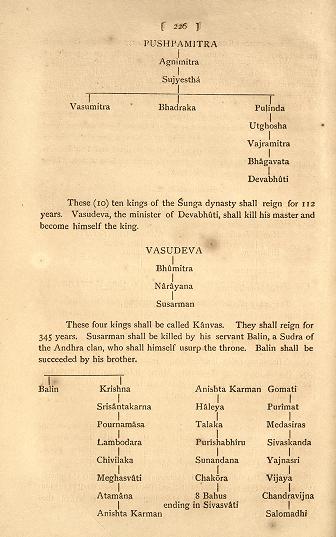 Vasudeva, the minister of Devabhuti, shall kill his master and become himself the king.

These four kings shall be called Kanvas. They shall reign for 345 years. Susarman shall be killed by his servant Balin, a King of the Andhra clan, who shall himself usurp the throne. Balin shall be succeeded by his brother Krishna (Balin + Krishna). The genealogy of Krishna is:

These thirty kings of the Andhra dynasty shall rule the earth for 456 years.

Ramayana - Kishkindha Kand Sarg 41 mentions about Andhras as under:

Sabha Parva, Mahabharata/Book II Chapter 28 mentions the provinces sabjugated by Sahadeva, who marched towards the southern direction. The hero brought under his subjection and exacted tributes from the Paundrayas, and the Dravidas along with the Udrakeralas and the Andhras and the Talavanas, the Kalingas and the Ushtrakarnikas.

The Mahabharata Tribe - Andhra (अन्ध्र) , A very ancient tribe, mentioned as Dasyus in the Aitareya Brahmana (VII.18), as the result of a curse by Vishwamitra. Linked with Pulinda, Khasa, Nishada and other low peoples, they fought for Duryodhana (VIII. 51.17). The Mbh. (XII.200.40) describes them as natives of the south. (VI.10.48)

The Mahabharata Tribe - Andhra (अन्ध्र) may be identified with Jat Gotra - Taka or Takhar, Name of their tribe was Andhra. [14]

According to Thakur Deshraj there was a great king in Andhra-vansh named Hala around 69 AD. The descendants of Maharaja Hala came from south to north and settled in uttar Pradesh and Rajasthan. The Jat groups of these Kshatriyas were known as Hala.[15]

The Mahabharata Tribe - Andhra (अन्ध्र) may be identified with Jat Gotra - Andar (अंदार) or Andara (अंदार) is Jat gotra same a Andhak. [16]