Location of Srinagar in Jammu and Kashmir

Srinagar (श्रीनगर) is the summer capital of Jammu and Kashmir. 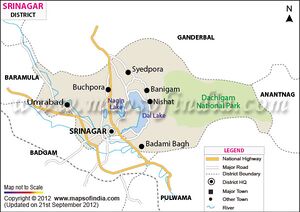 It lies in the Kashmir Valley, on the banks of the Jhelum River, a tributary of the Indus.

Rajatarangini[2] tells us that Pravarasena subdued many kings, and his fame spread far and wide like that of Agastya muni, and his army reached the sea in their march of conquest ; and the perspiration of his elephants made the waters of the Ganges look like the confluence of that river -with the Yamuna. He defeated the people of Saurashtra and upset the administration of the kingdom. His mind was so bent on the acquisition of fame, that he was indifferent to all earthly things, having no attachment towards any object. Pratāpasila otherwise called Shiladitya, son of Vikramaditya, was expelled by his enemies from his father's territory. Pravarasena reinstated him, and brought back the throne of the kings of Kashmira from the capital of Vikramaditya. Pratapasila for seven times refused to acknowledge the supremacy of the king of Kashmira, and the latter had to subdue him seven times. On the eighth occasion, Pravarasena called Pratapasila a brute and intended to take his life. The latter, however, saved himself by self-humiliation, and suggested that if he was a beast, his life was too insignificant to be destroyed. Pratipasila also amused the Kashmirian king by dancing before his court like a peacock, and imitating tho voice of that bird;. whereupon Pravarasena not only took him under his protection, but also bestowed riches on him. After conquering the world, he lived in the city raised by his grand-father, but felt a desire to found a city in his own name. In the village of Sharitaka Pravarasena proposed to build a city. But before he did so, he wished to set up Pravareshvara Shiva.

Kalhana[3] notes in Rajatarangini that Maurya Emperor Ashoka built the city of Srinagari in the 3rd century BC and also built many stupas in Kashmir on the rocky banks of the Vitasta (Jhelum) at Shushkaletra. On the extremity of Dharmaranya he built a chaitya so high that its top could not be seen. It was he who built Srinagara, which contained no less than ninety-six lacs of beautiful houses. He pulled down the dilapidated wall of the compound of the temple of Srivijayesha and built a new stone wall in its stead. He also caused to be erected two palaces near the courtyard of that god, and named them Ashoka and Isvra.

The city was then a part of the Maurya Empire, one of the largest empires of the Indian subcontinent.[4] Ashoka introduced Buddhism to the Kashmir valley, and the adjoining regions around the city became a centre of Buddhism.[5]

In the 1st century, the region was under the control of Kushans, based out of modern Pakistan and Afghanistan. Several rulers of this dynasty strengthened the Buddhist tradition.[6]

Vikramaditya (of Ujjain) and his successors probably ruled the regions just before the city fell to the control of the Huns - a nomadic tribe from central Asia in the 6th century, and Mihirkula was the most dreaded ruler of the city and the valley.[7]

Kalhana[8] tells us that Durlabhavardhana had many children. An astrologer predicted that Mahlana, one of the sons of the king, would not live long, so the boy raised a god Mahlanasvami. The king bestowed a village named Chandra near the hill Vishokakota, upon the Brahmanas. He also set up a Hari named Durlabhasvami at Shrinagara.

Srinagar became the capital of Kashmir around 960 CE, under the rule of the Hindu Shahis of Kabul.[9]

The independent Hindu and the Buddhist rule of Srinagar lasted until the 14th century when the Kashmir valley, including the city, came under the control of the several Muslim rulers, including the Mughals. It was also the capital during the reign of Yusuf Shah Chak, an Independent Kashmiri ruler who was tricked by Akbar when Akbar failed to conquer Kashmir by force. Yusuf Shah Chak remains buried in Bihar. Akbar established Mughal rule in Srinagar and Kashmir valley.[10]

With the disintegration of the Mughal empire after the death of Aurangzeb in 1707, infiltrations to the valley from the Pashtun tribes increased, and the Durrani Empire ruled the city for several decades.

Maharaja Ranjit Singh of Punjab province annexed a major part of the Kashmir Valley, including Srinagar, to his kingdom in the year 1814 and the city came under the influence of the Jat Sikhs.

In 1846, the Treaty of Lahore was signed between the Sikh rulers and the British in Lahore. The treaty inter alia provided British de facto suzerainty over the Kashmir Valley and installed Gulab Singh as an independent and sovereign ruler of the region.

Alexander Cunningham[12] writes that Srinagari, the old capital of Kashmir prior to the erection of Pravarasenapura, is stated to have been founded by the great Asoka, [13] who reigned from B.C. 263 to 226. It stood on the site of the present Pandrethan, and is said to have extended along the bank of the river from the foot of the Takht-i-Suliman to Pantasok, a distance of more than three miles. The oldest temple in Kashmir, on the top of the Takht-i-Suliman, is identified by the unanimous consent of all the Brahmans of the valley with the temple of Jyeshta Rudra, which was built by Jaloka, the son of Asoka, in Srinagari.[14] This identification is based on the fact that the hill was originally called Jyeshteswara. The old bridge abutments at the village of Pantasok are

[p.96]: also attributed to Asoka ; and the other ruins at the same place are said to be the remains of the two Asokeswara temples which are noted in the native chronicle of Kashmir. Srinagari was still the capital of the valley in the reign of Pravarasena I., towards the end of the fifth century, when the King erected a famous symbol of the god Siva, named after himself Pravareswara. This city still existed in A.D. 631, when the Chinese pilgrim Xuanzang arrived in Kashmir, although it was no longer the capital of the valley. Xuanzang speaks of the capital of his time as the " new city," and states that the " old city " was situated to the south-east of it, at a distance of ten li, or nearly two miles, and to the south of a high mountain. This account describes the relative positions of Pandrethan and the present capital with the lofty hill of Takht-i-Suliman so exactly, that there can be no hesitation in accepting them as the representatives of the ancient places. The old city was still inhabited between A.D. 913 and 921, when Meru, the minister of Raja Partha, erected in Puranadhisthana, that is in the " old capital," a temple named after himself Meru-Varddhana-swami. This building I have identified with the existing temple of Pandrethan, as Kalhan Pandit relates[15] that, when Raja Abhimanyu set fire to his capital, all the noble buildings "from the temple of Varddhana Swami, as far as Bhikshukiparaka, (or the asylum of mendicants) were destroyed. I attribute the escape of the limestone temple to its fortunate situation in the midst of a tank of water. To this catastrophe I would assign the final desertion of the old capital, as the humble dwellings of the people could not possibly have escaped the destructive

Pravarasenapura, or the new capital, was built by Raja Pravarasena II. in the beginning of the sixth century. Its site, as already noted, was that of the present capital of Srinagar. This is determined beyond all possibility of doubt by the very clear and distinct data furnished by the Chinese pilgrim Hwen Thsang, and by the Hindu historian Kalhan Pandit. The statements of the first have already been quoted in my account of the old capital ; but I may add that Hwen Thsang resided for two whole years in Kashmir, in the Jayendra Vihara[16] or Buddhist monastery, built by Jayendra, the maternal uncle of Pravarasena. The Hindu author describes the city as situated at the confluence of two rivers, and with a hill in the midst of it. This is an exact description of the present Srinagar, in the midst of which stands the hill of Hari Parbat, and through which flows the river Hara, or Ara, to join the Behat at the northern end of the city.[17]