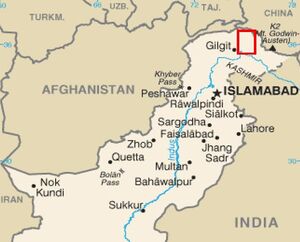 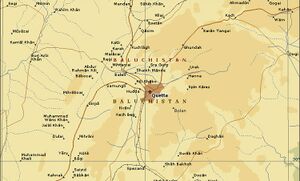 Map of Quetta in Balochistan 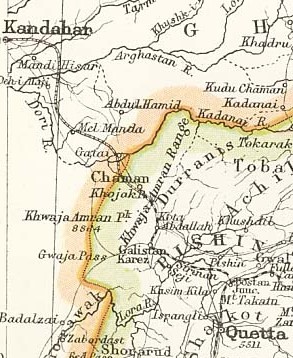 Quetta is also spelled Kuwatah, which is a variation of Kot, a Pashto word meaning "fortress".[1] It is believed that it relates to the four imposing hills (Chiltan, Takatu, Zarghoon and Murdaar) that surround the city and form a natural bulwark.

Located in north western Balochistan near the Pakistan-Afghanistan border, Quetta is a trade and communication centre between the two countries. The city lies on the Bolan Pass route which was once the only gateway from Central Asia to South Asia. It is an important marketing and communications centre between Afghanistan and Pakistan. Situated at an elevation of 1676–1900 meters above sea level in south-western Pakistan, Quetta is also known as the fruit basket of Pakistan. 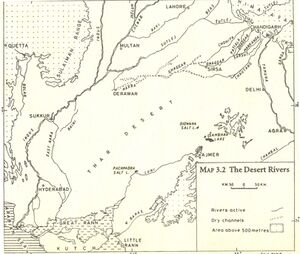 Location of the Desert Rivers by Irfan Habib

The earliest settled villages in the region date to the ceramic Neolithic (c. 7000–6000 BCE), and included the site of Mehrgarh (located in the Kachi Plain). These villages expanded in size during the subsequent Chalcolithic, when interaction was amplified. This involved the movement of finished goods and raw materials, including chank shell, lapis lazuli, turquoise, and ceramics.

By 2500 BCE (the Bronze Age), the region now known as Pakistani Balochistan had become part of the Harappan cultural orbit, providing key resources to the expansive settlements of the Indus river basin to the east.

The ancient name of Quetta was Shalkot, a term by which it is still known among the people of the country, the District was held in turns by the Ghaznavids, Ghurids, and Mongols, and towards the end of the fifteenth century was conferred by the ruler of Herat on Shah Beg Arghun, who, however, had shortly to give way before the rising power of the Mughals. The Ain-i-Akbari mentions both Shal and Pishin as supplying military service and revenue to Akbar, however these areas passed with Kandahar to the Safavids.

On the rise of the Khilji power in Kandahar at the beginning of the eighteenth century, simultaneously with that of the Baloch in Kalat, Quetta and Pishin became the battle-ground between Afghan and Baloch, Ahmad Shah Durrani Finally handed Quetta over to the Khan of Kalat Mir Noori Naseer Khan Baloch for helping him with his Baloch Army against Persians in Iran in 1751 against Marathas in Third Battle of Panipat (1761) and against Sikh in 1765 .[2]

It is believed that the earliest inhabitants of the city were the Pashtun Kasi Tribe. Quetta was first mentioned in the 11th century when it was captured by Mahmud of Ghazni on one of his invasions of the subcontinent.

The powerful Khans of Kalat held the fort from 1512. In 1543 the Mughal emperor Humayun rested here on his retreat to Persia, leaving his one-year-old son Akbar until he returned two years later. The Ghilzai power in Kandahar at the beginning of the eighteenth century, simultaneously with that of the Baloch in Kalat, Quetta and Pishin became the battle-ground between the Afghans and Baloch in the region.

Ahmed Shah Durrani finally handed Quetta over to the Khan of Kalat Mir Noori Naseer Khan Baloch for helping him with his Baloch Army against 1751 against the Marathas in the Battle of Panipat (1761), and against the Sikhs in 1765.

In 1828 the first westerner to visit Quetta described it as a mud-walled fort surrounded by 300 mud houses. Although occupied briefly by the British during the First Afghan War in 1839, it was not until 1876 that Quetta came under full British control and Robert Sandeman was made political agent in Baluchistan. By the formation of political party of Muslims (Muslim league) Balochistan paid its contribution for the freedom of Pakistan. Qazi Muhammad Essa was the first man introduced Muslims political party in Balochistan, his father was Pashtun and mother was hazara, this struggle persisted until 1947. After the freedom, Balochistan was badly deprived of its legal rights resulting in Balochistan being the most backward province of Pakistan. Quetta especially, was pushed into fire of sectarianism after the dictatorships of Ayub Khan, Yahya Khan and Zia ul Haq.

H. W. Bellew[3] writes that ....The eastern part of the Ghilzi country, at the head waters of the Tarnak and Arghasan rivers, is a rich pasture tract in the summer season, whilst the open plain and steppe to the westward affords good winter quarters in the sheltered hollows of the undulating surface. This country was the first real and permanent settlement of the Ghilji in Afghanistan, and during the early centimes of the Muhammadan era was known by the name of Turan probably, from the name of the combined clans just as at the same period, the country to the south, including the present Peshin and Shal or Quetta, was called Budha from the Budhists inhabiting it.

H. W. Bellew[4] writes....The Tarin tribe occupies the Sibi and Peshin districts, and is one of the five tribes composing the Sharkhbun division of the Sarabanri Afghan. ....The Tor Tarin, "Black Tarin," inhabit the Peshin valley, having the Achakzi to their north, the Barech to their west, and the district of Shal (Quetta) to their south, whilst on the east they are separated from their Spin Tarin tribesmen by a strip of Kakar territory.

Ram Sarup Joon[5] writes that ....According to the research of Hem Chandra, Lichhavis belonged to Madrak dynasty and were called Karskar or Kakkar because of their origin from Kar. Shale, Shal, Shi, all originating from Sialkot are also Madrak. In Sanskrit Scripture they have been called Jatra or Jatrali meaning Jat.

According to various historians Sialkot, Quetta and Ghazni were the capitals of the Madrakas since ancient times.[6][7] Presently Jats of this clan are known as Maderna in Marwar region of Rajasthan. Sialkot in Mahabharata is mentioned as Shakala (शाकल).

Sabha Parva, Mahabharata/Book II Chapter 29, mentions the names Western Countries which Nakula had subjugated . ....And the mighty hero, proceeding thence to Sakala, the city of the Madras, made his uncle Salya accept from affection the sway of the Pandavas. The shloka 13 writes as follows about Madra king Salya:

In Jabulistan there is a big 'Khap' of Gaurzai (derivative of Gaur). Ghazni's old name was Gazni and was founded by the Madrak Jat Raja Gaj. After the death of Mahmood Ghazni, Gaurs again came into power. Their capable ruler planned to extend his empire into India to revive the ancient glory of Gaurs who had earlier ruled Hissar and Ajmer Areas. The ancestors of Raja Gaj had also ruled Sialkot and Quetta. Ruins of a fort Bala-e-Hissar still exist in Afghanistan.[8]

Ram Swarup Joon[9] mentions.... 64. Madrak, Madra: The Madrak gotra is an ancient gotra, and is the root of many of the Jat gotras. According to various historians Sialkot, Quetta and Ghazni were the capitals of the Madrakas since ancient times. King Shalya, the maternal uncle of the Kauravas was from the Madrak gotra. Colonel Todd found a rock inscription during the excavations of Shakla Nagri (Modern Sialkot), which he sent to the Asiatic society. In this inscription King Shalya has been called a Madrak Jat. In Mahabharata (Karna Parva) King Shalya has been called Jatit.

Alexander's army had a fierce battle with the forces of the Madrakas at Sialkot. Madra and Madrayana are just the other names of Madrak. According to "Neel Puran", Madrak country began after crossing the river Bias, Satyabhama (Satluj) and the river Devika (in Multan) flowed through it. In ancient India the country between the Ravi River and Chenab River was called Madrak. According to Alberuni and Ptolemy Sialkot and Shakilnagri are one and the same. People belonging to Bhatti gotra associate themselves with both Ghazni and Sialkot and for this reason the Bhatti gotra is accepted as a branch of Madrak.

"Greeks of Bactria (partly modern Afghanistan), expelled by the hordes of Scythians, entered India in the second and first centuries BC and are said to have penetrated as far as Orissa (an Indian province in south-east). Meanwhile the Medii, Xanthii, Jatii, Getae and other Scythian races, were gradually working their way from the banks of the Oxus (in Central Asia) into Southern Afghanistan and the pastoral highland about Quetta (a Pakistani city), whence they forced their way by the Bolan Pass, through the Sulaiman Mountains into India, settling in the Punjab about the beginning of the first century AD. It is from these Scythian immigrants that most of the Jat tribes are at any rate partly descended".

Hukum Singh Panwar (Pauria)[12] writes that ....The Scythic (Saka) element in the ornaments discovered at Mehargarh[13] near Quetta in the Kachi plains takes the Saka association with and occupation of Balochistan by them as far back from about 8566 B.C. down to 2400 B.C.

Swami Keshwanand had visited Quetta in 1907.

Rajatarangini[14] has mentioned Rajavadana Balhara's father Ojas as lord of Keṭṭa (Ketta). It says ....Naga then published it among his own men that Rajavadana who was not estranged from [the king] would destroy the men of Darad who were routed in battle, together with Bhoja. The celebrated Kshemavadana and Madhubhadra, two leaders of the lord of Kampana who were brought before the lord of Darad, and the terrified Ojas, lord of Keṭṭa ; — these three privately held a consultation. But Bhoja who knew the hearts of men laughed at them. Though the king was surrounded by the soldiers, as the sun is by a crystal, yet Bhoja fell on Viḍḍasūryya, as on fuel with a desire to burn the king. Viddasuryya labored under anxiety on account of the danger of the king, as if he labored under consumption, and he became like the waning moon in the nights of the dark fortnight. [VIII(ii), p.262]

Subdivisions: In 1975, Quetta and Pishin were made separate districts. Quetta District today consists of two towns, and one sub-tehsil: Zarghoon, Chiltan, Panjpai Sub-Tehsil

Today, it is an important city on the Afghanistan-Pakistan border. Quetta has more than 30% pashtoon population mainly Kasi, Kakar, Davi, Tareen, Achakzai , etc